I travelled around Australia in 1987, taking photographs of Lighthouses for the lighthouse history and coffee-table book From Dusk to Dawn (A History of Australian Lighthouses). This was the federal Department of Transport and Communication‘s contribution to the 1988 Australia Bicentennial and featured around ninety of my images together with text by historian Gordon Reid.

The book is long since out of print and there is not likely to be another edition.  A few copies are available second-hand.  There was also a leather bound edition or 25. 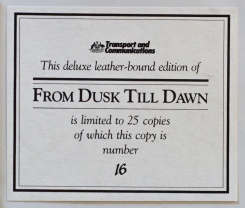 As well as the book, there was an exhibition, first in the Link Gallery outside the Canberra Theatre and later in the (then very) New Parliament House.  This comprised thirty Cibachrome prints that I printed on a borrowed enlarger.  This was an exercise in time management.  Due to the vagaries of gallery booking slots I gave myself two weeks only to make the proposal, get it accepted, borrow the enlarger, make 35 or so prints to end up with 30, arrange the matting and framing, generate and print a catalogue and hang the exhibition.  Amazing what you can do when you put your mind to it.

Part of the exhibition at the New Parliament House

In following posts I will display my images with some comments.  First, because I mainly used large format cameras and film, I will explain the equipment used:

Then I will cover each of the lighthouses I visited.  For consistency of presentation, this will be in clockwise order around the Australian coast from Queensland to Western Australia. 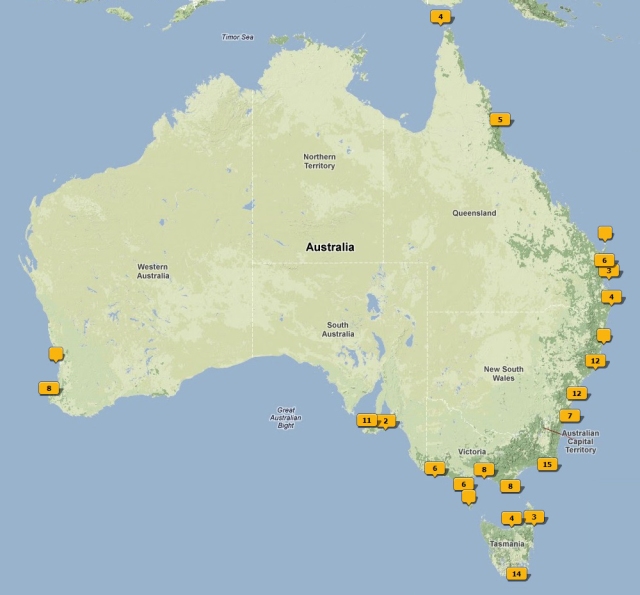 Here is an indication of the locations of the images.  The numbers are numbers of images (and blank equals one) but it’s not precise because where several lighthouses are close together they become grouped in a single box.  The 14 for Southern Tasmania, for example, represents three lighthouses.

For people who may be interested in images from a particular lighthouse, here they are in alphabetical order:

The Australian Maritime Safety Authority (AMSA) is the owner of these images for any commercial purposes.  However, I received permission to scan them and to make and sell fine art prints (which I may make available at a later date).

At the moment, my expectation is that I will post colour images and may do one or more posts of monochromes at the end.

I have most of the images but not all.  There was a period when the Department’s collection was not well maintained as images were loaned out and good records not kept.  For one of those missing images I made some prints in 1988 that I can scan.  For one or two of the rest I might copy images from the book.  I may also include scans of a few others that I took as personal images while travelling between the lighthouses.