Rottnest Island is 18 kilometres west of Fremantle, which is the port for Perth, capital of Western Australia.  It is 11 kilometres long and 4.5 kilometres wide at its widest point.  It is probably most famous as the home of the quokkas, small endearing marsupials rather like a cross between a wallaby and an oversized rat.  The name of the island is Dutch for Rat’s Nest, referring to the quokkas.  I visited on 9th and 10th of May 1987. 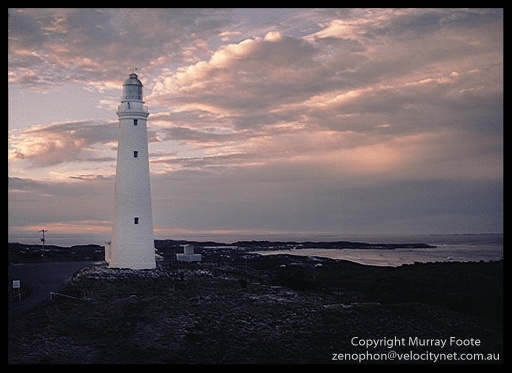 Rottnest Island was a place of Aboriginal settlement for more than 30,000 years and possible more than 50,000 years.  However, there were no Aboriginal residents when the first Europeans arrived and it had become an island about 7,000 years ago so there had probably been no Aborigines there for thousands of years.

For most of the period from 1838 to 1931, the island served as an Aboriginal penal colony.  Western Australia’s first lighthouse was built here from 1842 to 1849, using Aboriginal labour under a particularly savage overseer.  The slowness of the construction is probably a mark of the brutality of the working conditions.  That lighthouse started operations in 1851.  The optic was made in Perth and the lantern room constructed on site, which is unusual as most were imported from Britain.

The current lighthouse was commissioned in 1896.  It is nearly 40 metres high and sits 80 metres above sea level.  It was built beside the original lighthouse which was less than half as tall. 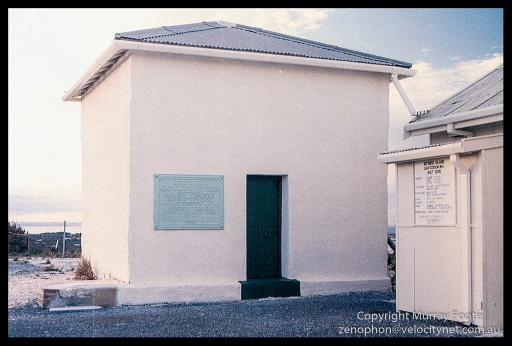 The original lighthouse was a round tower mounted on a square base.  The building with the green plaque is that square base. 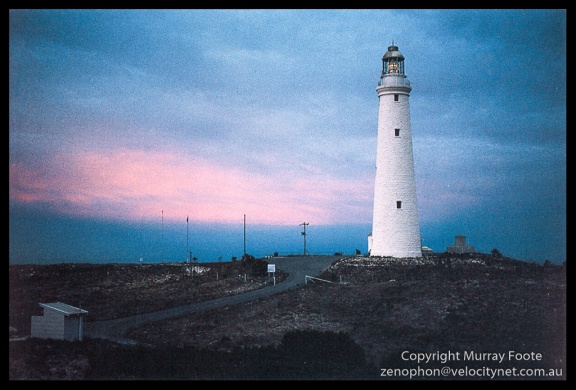 When I was at Cape Leeuwin lighthouse, I received a telegram from Western Australia State Office saying that under no circumstance was I to stay with the lighthouse keeper at Rottnest Island.  I had already arranged to stay there and I did not fancy having to walk a kilometre from the township to be in position at the lighthouse before dawn.  Therefore, as far as I was concerned I never received the telegram.

As it turned out, we got on fine.  I just had to listen to him and be a little patient.

He had been a keeper at Cape Leveque lighthouse some years previously when there was an earthquake.  I did not go to that lighthouse because it was no longer manned at the time.  Lighthouse keepers were a very diverse group of people but they had two things in common.  One was that they didn’t mind isolation and the other was that they maintained the lighthouse with meticulous cleanliness, an after-effect of an old naval tradition.

The keepers cleaned up after the earthquake but the tremors had knocked some of the mercury out from under the prism.  The escaped mercury didn’t look unclean or untidy so they just left it to roll around on the floor.  As a consequence of this he had mercury poisoning.  This was common amongst hat makers in the eighteenth and nineteenth centuries and an early Chinese Emperor died because he took mercury in order to live for ever, but apart from Minimata poisoning in Japan, mercury poisoning was not common in the twentieth century.

Mercury poisoning can cause damage to the brain, nervous system, kidney and lungs.  I advised him to go and talk to his Union because he was clearly suffering as a result of an industrial accident.

This was the last From Dusk till Dawn lighthouse post.  There have been 45 posts, nearly 200 images and over 20,000 words.  I intended to also do some monochrome conversions but I have now run out of time.  They may come much later.