I took two exposures from pretty much the same place.  This is the one that’s in the book.  By the clouds I’d guess there’s about 20 minutes between them.  This was also one of the prints that was in the exhibition in the Link Gallery and then the New Parliament House.  I have the exposure details because they were in the catalogue for the exhibition.  I made a database of all image details but that’s been lost.  I still have a notebook with details for many images but I must have been using a different one for Queensland. 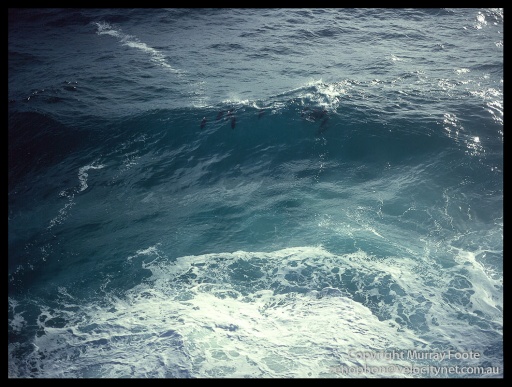 I was not the only one who was impressed by the waves.  There were at least twenty surfers there and you can see some if you look carefully. 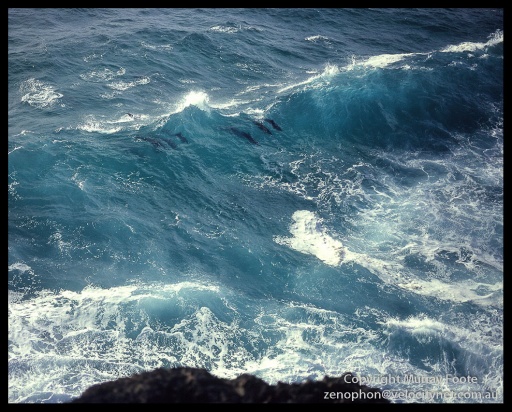 Here they are again, with three of them just catching the crest with the wave about to break.  They are of course large marine mammals, otherwise known as dolphins.

Here is another view from a similar location, still looking towards the distant lighthouse.

This is one of the keepers’ quarters at Double Island Point.  The lighthouse was built in 1883 but the cottage would be much more recent as the original ones were later replaced. 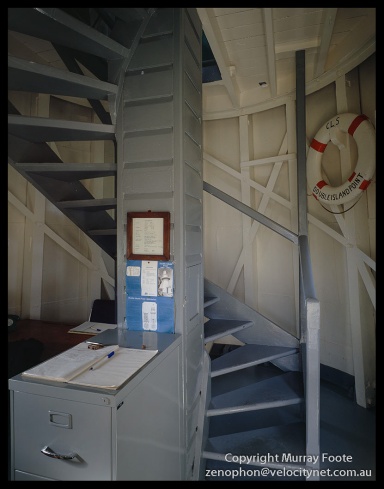 Here is the stairwell of the lighthouse.  It is made of wood, as you can see, and the outer cladding of the lighthouse was metal.  This was a method of construction often used in Queensland, being both cheaper than traditional stone construction and sitting lighter on sandy soils.  When the clockwork mechanism rotated the prisms of the lighthouse, the weights slowly went down inside the central wooden column.

Here is a page of details of the lighthouse, on the centre column on the previous image.  You may just be able to read it (if you have a large enough screen or maybe if you click on it for a larger view).

This is the clockwork mechanism that originally rotated the lights, with a profusion of brass gears.  The keepers needed to wind it up every couple of hours or so.  It has however been replaced by the electric motor that sits on top of it.