I had long been interested in visiting the La Brea Tar Pits.  It’s a place where oil oozes to the surface and forms asphalt.  This in turn becomes covered with water and leaves.  Animals wander in and become trapped and then predators come and they are trapped too.  This has been happening for up to 38,000 years and still happens to some extent today although the areas are now fenced off.  The bodies of the trapped animals are preserved in the asphalt.

This is Harlan’s Ground Sloth ((Glossotherium Harlani).  It was a little under two metres tall and 700 kilos in weight.  The largest giant sloth was six metres long (including the tail) and weighed four tonnes. 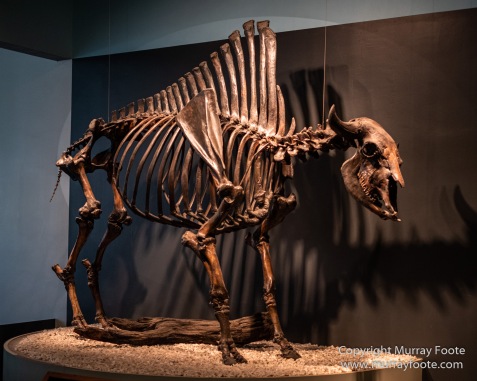 Antique Bison (Bison Antiquus).  It had a larger body, larger hump and larger horns than the surviving species. 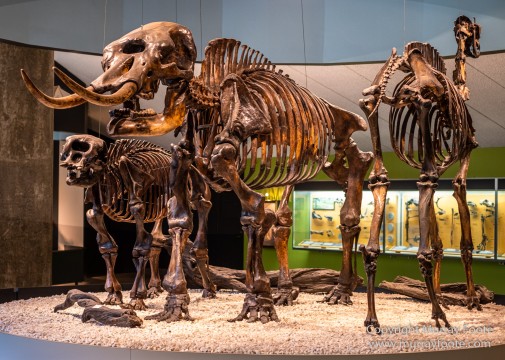 On the left and centre, American Mastadon (Mammut Americanus).  They had shorter legs, a longer body and tusks up to five metres long, as compared to modern elephants (not close relatives).  On the right is an extinct camel, Camelus Hesternus, a bit larger than modern camels and probably with one hump.  Camels evolved in the Americas and this species was likely exterminated by the arrival of humans. 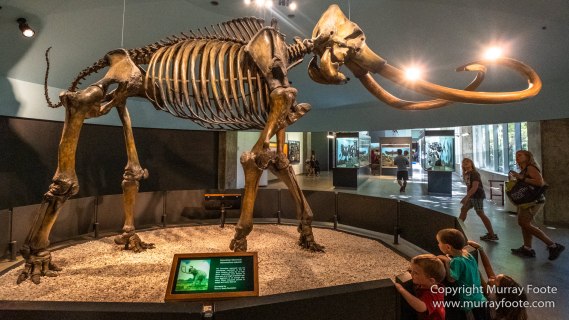 Colombian Mammoth (Mammathus Columbi), up to four metres tall and ten tonnes in weight.  Tusks could be up to five metres long.  It is not clear to what extent climate change or human hunting was responsible for their extinction. 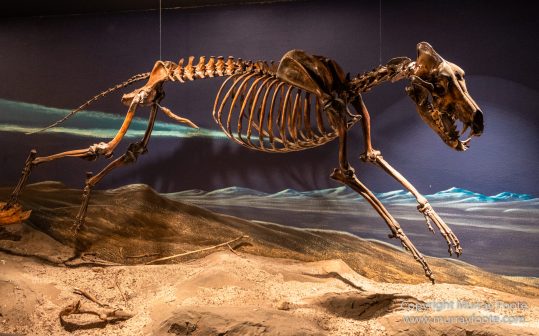 Large Game of Thrones puppy, or alternatively, Dire Wolf (Canis Dirus).  It was probably a little larger than the largest wolves today but had stronger jaws and bite.

Big Pussycat or Naegele’s Giant Jaguar (Panthera Atrox), also known as the American Lion.  It was larger than both a Siberian tiger and a Sabre-Toothed Cat.  There is some doubt as to whether it was closer to today’s lions or jaguars.  Jaguars, though, have one of the strongest bites of all animals behind only some crocodiles and hippos, stronger than tigers, so if it was more like a jaguar it wold have had a fearsome bite.

Sabre-toothed Cat (Smilodon Fatalis), about the same size as a African lion but much more heavily built.  It was an ambush predator and died out due to climate change.

An exposed section of tar pit.