Cliffy Island is a small island off the coast of Victoria near Wilson’s Promontory, essentially the tip of a submerged mountain.  I flew over in a helicopter on the morning of 21 July 1987 on the way to Deal Island (in the Kent Group). 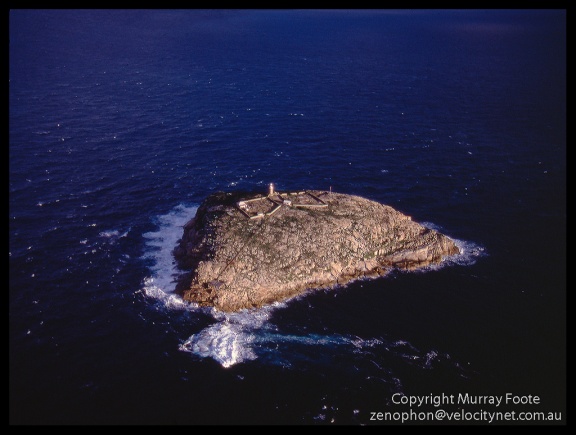 Cliffy Island lighthouse came into operation in 1884.  The lighthouse is 12 metres high and it sits 52 metres above the sea.  It was converted to automatic in 1971, the keepers transferred out and the cottages demolished.  Today the island’s only occupants are seals.

In the days before helicopters, the logistical difficulties of supply and of getting people on and off the island must have been considerable.  … Not to mention the difficulties of building there in the first place.  The lighthouse is built of granite sourced on the island.

There was originally a stone cottage for the head keeper and a wooden duplex building for the assistant keepers and their families.  The stone cottage burnt down in 1919 and all cottages were later replaced.  This island is not the most convenient place to be burned out of your home.

Until there was a radio telephone in 1926, communications with the mainland must have been intermittent.  I think it was too far to flash signals to Wilson’s Promontory, the next lighthouse.  I would guess they used carrier pigeons but don’t actually know.

I thought I had a second image of Cliffy Island but I found that it was mislabelled and is of Deal Island, taken later that same morning.  I have added this to the post for Deal Island as the last image, though I have usually kept the images in chronological order and it would have been the first taken.