Prior to construction of the lighthouse, several ships had sunk nearby and the bay immediately to the south is called Wreck Bay.  The lighthouse opened in 1860 but the site was misconceived and as well as that they built it two kilometres away from the intended site as that was closer to the source of the stone.  The consequence of this was that it was visible to ships approaching from the South but not from the North.

The solution was to build another lighthouse on the opposite entrance to Jervis Bay at Point Perpendicular, which was commissioned in 1899, as we saw in the previous post.  Around two dozen ships went down on this part of the coast until the new lighthouse came into operation.

The Cape St George lighthouse was built in the style of the original Macquarie lighthouse and was originally 16 metres high.  Had it survived intact it may have been a contender for the most elegant lighthouse in Australia.  Unfortunately, it was deemed to be a navigational hazard to have two lighthouses so close together. Consequently the Australian Navy used it for target practice between 1917 and 1922. 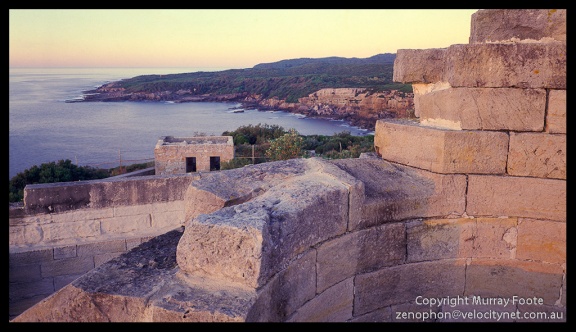 In 1987, the site was completely open and you could walk will climb anywhere you like. This is no longer the case and there are wire fences around the lighthouse. One can well imagine this was necessary to protect it from vandalism, but it’s still a shame.