You can see the mass of domes ahead and to the right.  There are five Trading Domes in Bukhara and for centuries these enclosed markets protected customers from wild swings in weather.  This is Toqi Telpak Furushon (or the Cap Makes’ Bazaar). 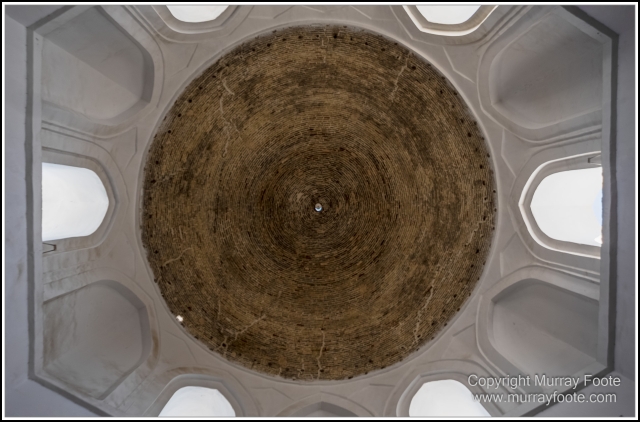 This is looking up at the largest dome.  You could see one of the “dome windows” in the previous image.

A closer look at the centre of the inside of the dome. 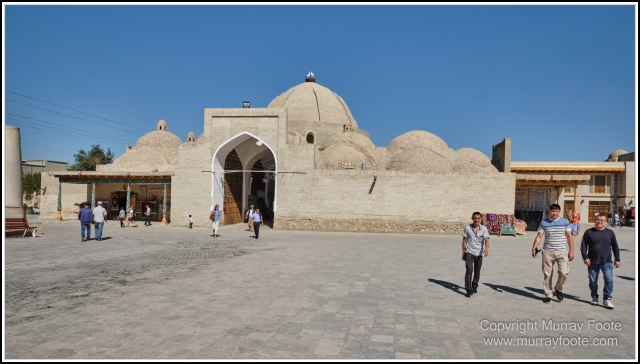 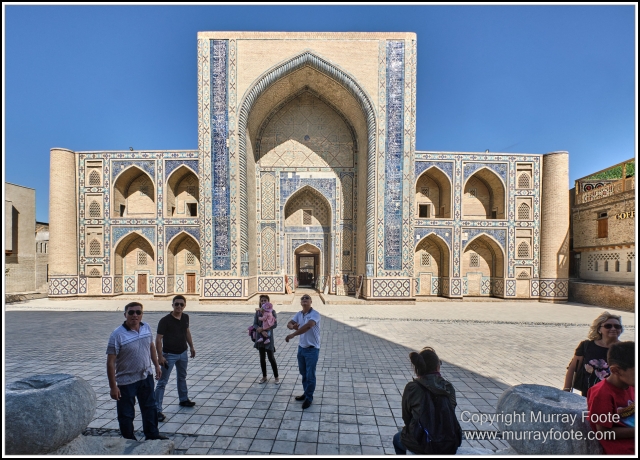 We’ve walked through Toqi Telpak Furushon and probably around another Trading Dome we will get to soon.  To the right there are two madrassahs facing each other.  This is Ulugbek Madrassah.

The inside of Ulugbek Madrassah. 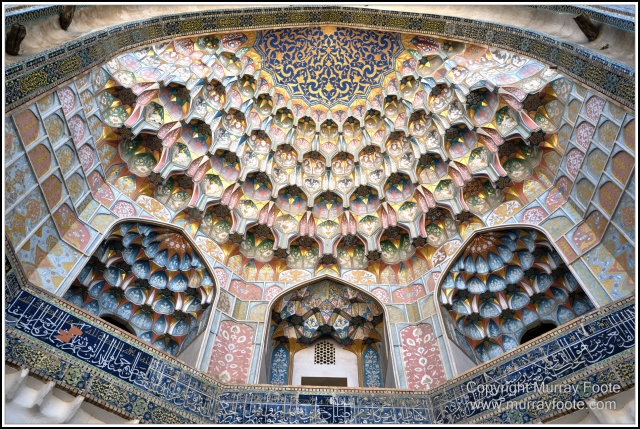 This is the top of the arch at the entrance to Abdulaziz-Khan Madrassah and the next twelve images are inside that madrassah.

The fractal profusion of connected objects under the central arch and the three smaller “window arches” are muqarnas.  In their simplest form they can be cubes and they have a function for corner bracing, paradoxically enhanced by their profusion.  They can also take many forms including stalactite and also have aesthetic and religious associations.  The stalactite structures lead the eye upwards and speak to the connections between heaven and earth.  Their geometric complexity is also an echo of the Pythagoreans who looked upon numbers as the fundamental element of the universe and numbers were thus to them divine.  Muqarnas are a fundamental element of Islamic architecture since the eleventh century.

The two madrassahs facing each other form a single ensemble called Kosh Madrassah.  They also represent the heritage of two different dynasties, the Timurids and the Ashturkhanids.  Ulugbek Madrassah was built by Timur the Great’s grandson Ulugbek in 1420, whereas Abdulazizkhan Madrassah was built by the Emir of  Bukhara, Abdulaziz Khan in 1652.

This was an attic for scholars, dating back hundreds of years. I believe we are looking at shelves for books and perhaps writing materials.

We walked up some stairs to enter here.

A wider view of the room. 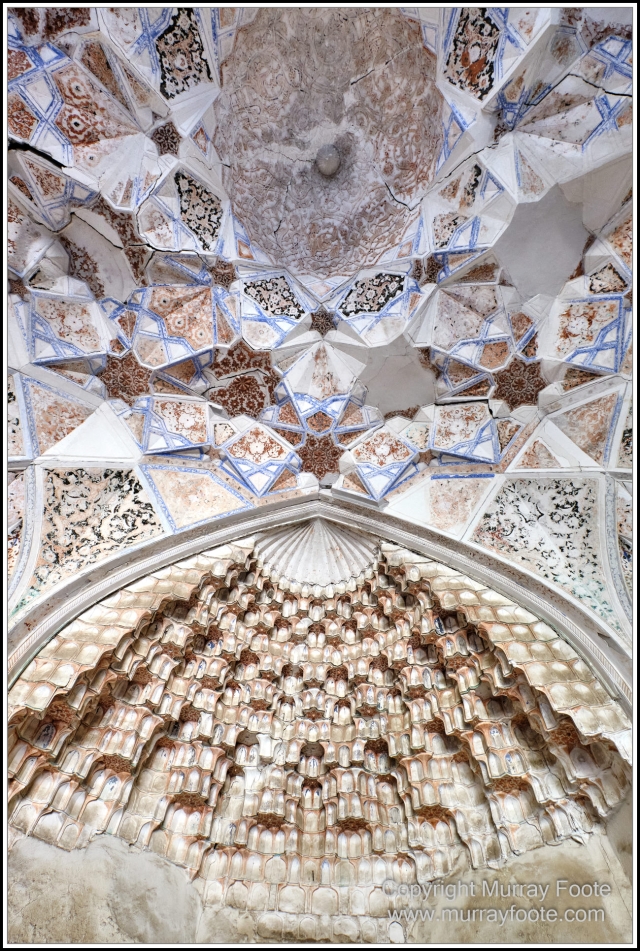 This image and the following eight are looking up at the ceilings within the madrassah. 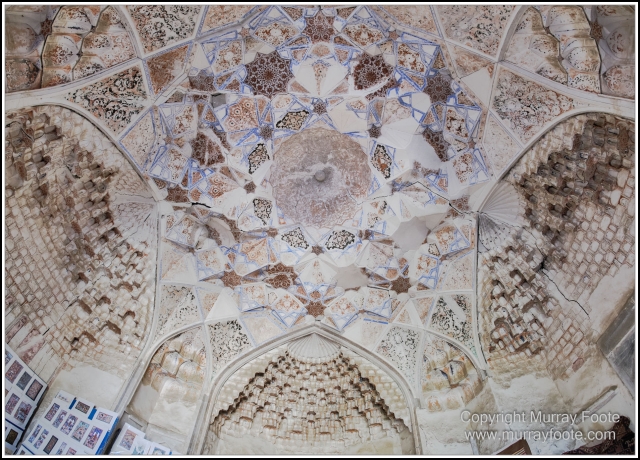 Though they are different views of the same interior they nonetheless show great variety.

Many other instances of muqarnas are on display.

(I’ll just let you talk to the images for a while). 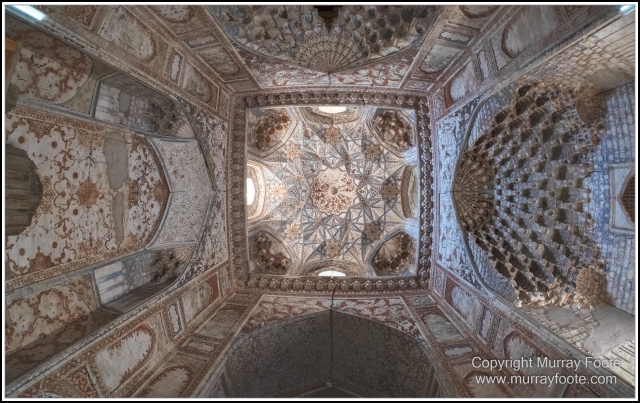 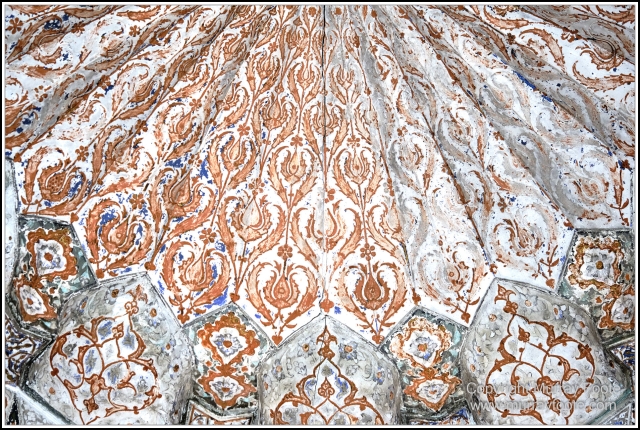 Now back in the open, looking west and heading back to the nearby Trading Dome Toqi Zaragon.

There have probably been trading domes in Bukhara for as long as there has been the Silk Road but Bukhara itself has been wiped away from time to time.  For example, Genghis Kan, a hero in Mongolia but possibly the world’s most genocidal ruler, razed it to the ground in 1220.  So the five surviving trading domes are more recent than that.  Toqi Zaragon dates from 1570 while Toqi Tilpak Furushon, which we visited earlier, dates to the later sixteenth century.  Historically, the entrances to the trading domes were large enough for a fully-laden camel to pass through, though seemingly much larger these days.

In the far background is the Kalon Mosque and the Kalon Minaret (next post). 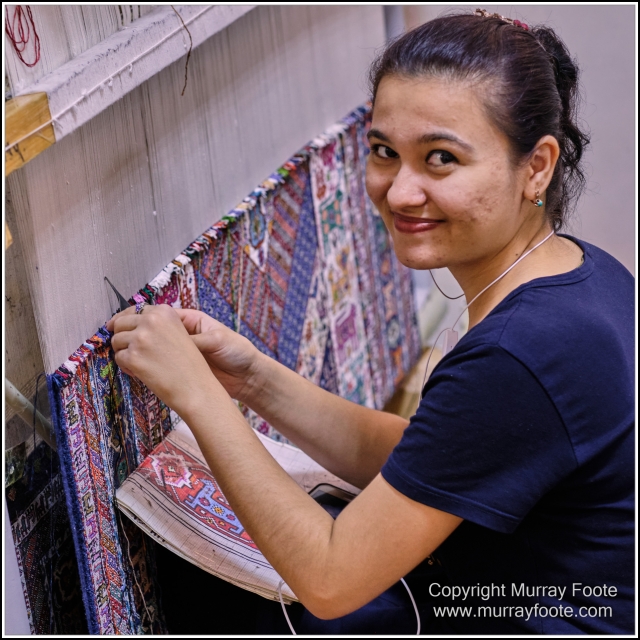 Inside the Trading Dome we see women weaving carpets by hand with incredible skill and meticulous attention to detail. 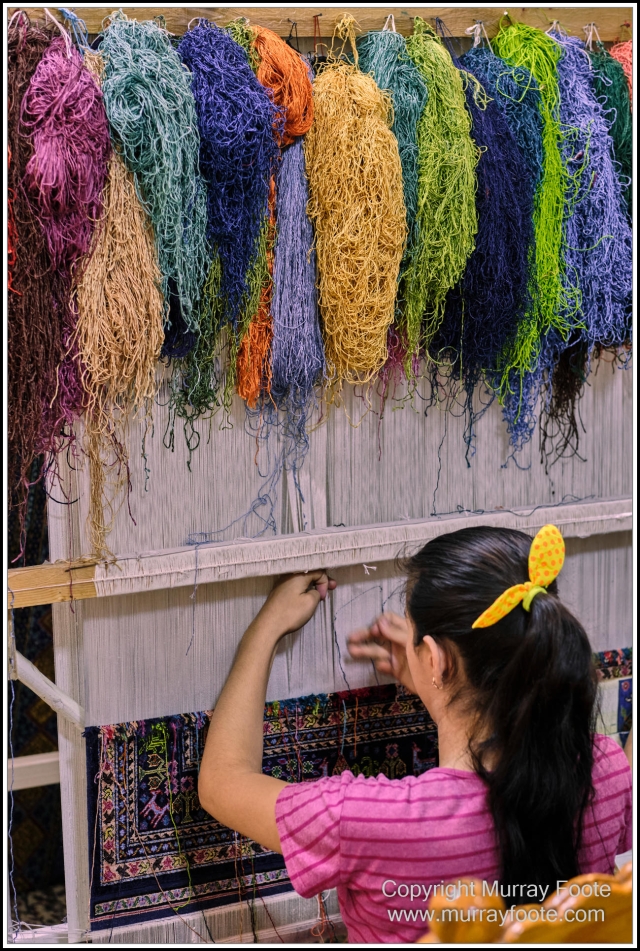 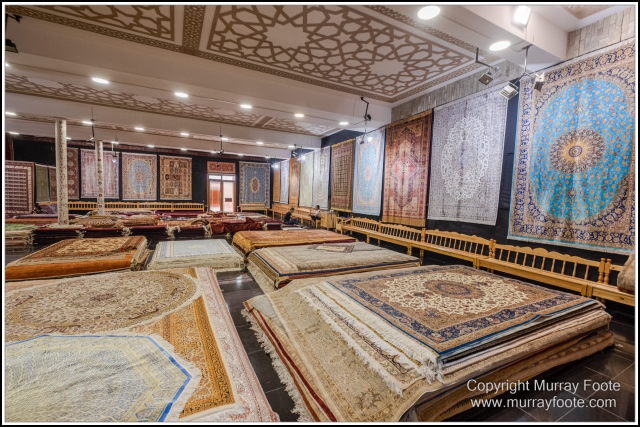 You can of course buy carpets, with a huge array on offer.  You just need lots of money including for shipping it back home.