A truck on the road between Khiva and Bokhara. Likely advice to any pedestrians on the right side of the road – run! 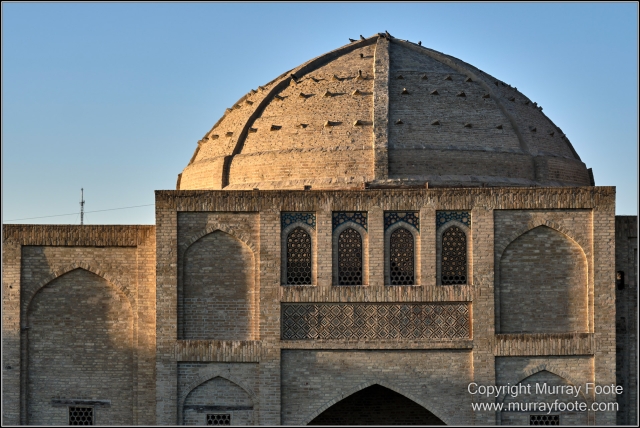 A dome in the late afternoon light in Bukhara. 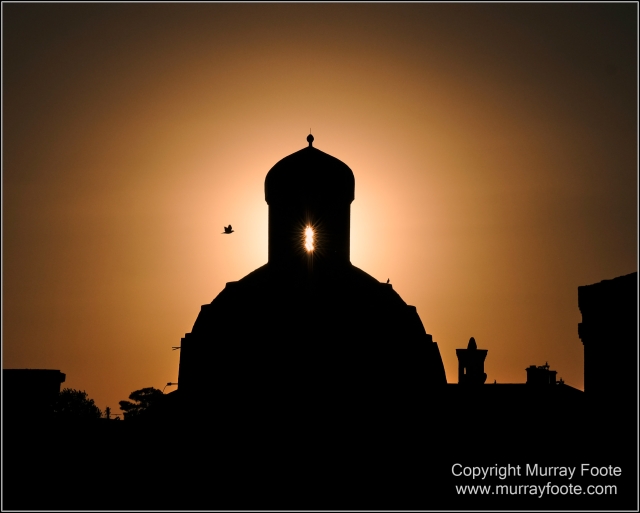 This looks like a sunset but the sun is well above the horizon, so it’s an exposure directly into the sun which is shining through the window in the cupola. Rather than a low light exposure, it is actually 200 ISO, 1/8,000 sec, f11.
. 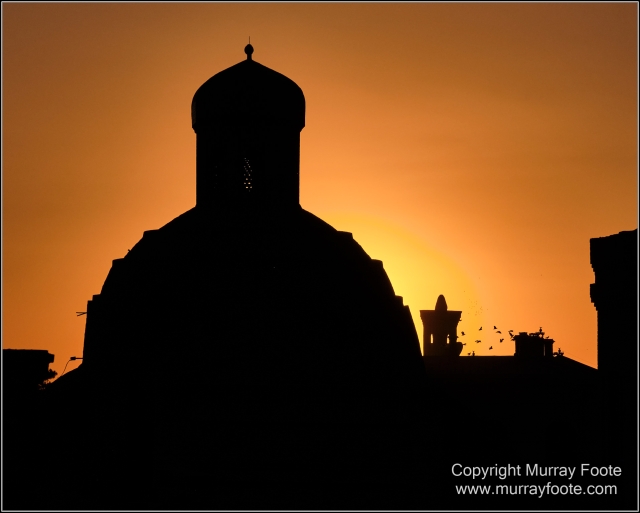 A little later with a cloud of birds in the distance. These two were probably taken at dinner.
.

An hour later, a wedding group on the streets.
.

This is above the main portal of the Nadir Divan-begi Madrasa.

It was built as a caravanserai (prosaically, if you like, a motel with camels instead of cars) but either dedicated as or later converted to a madrassah (or school, often religious) and the architecture more resembles a caravanserai than a madrassah. It was built during the reign of Imam Quli Khan (1611 to 1642, a time of prosperity and peace) and built by his Vizier Nadir Divan-begi, after whom it is named. In the image above, the sun has a face as do the serpents below him. Traditionally, Islam strongly disapproved of depiction of humans and animals but this was relaxed in the Persian-influenced world in the early seventeenth century.

This image and the next eight are also in the Nadir Divan-begi Madrassah.
. 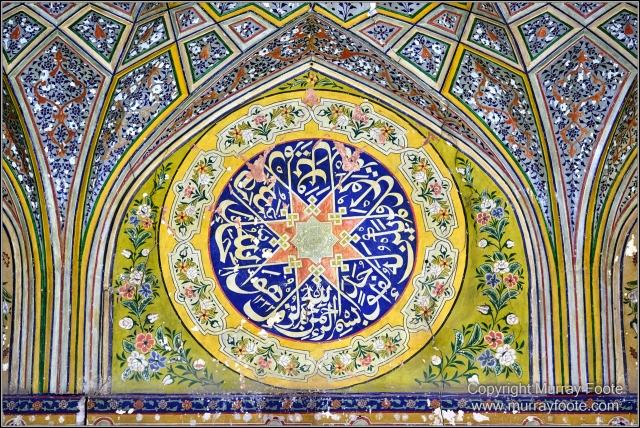 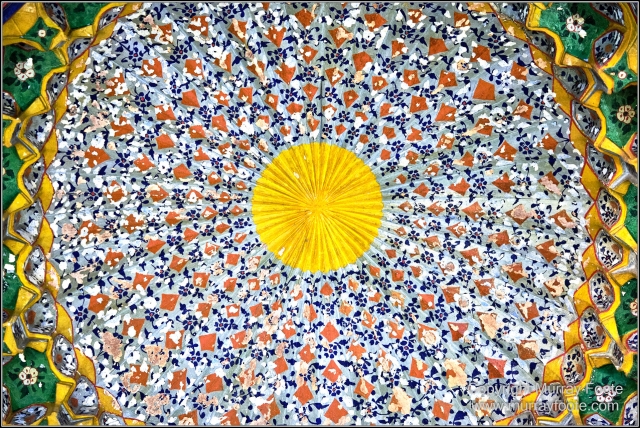 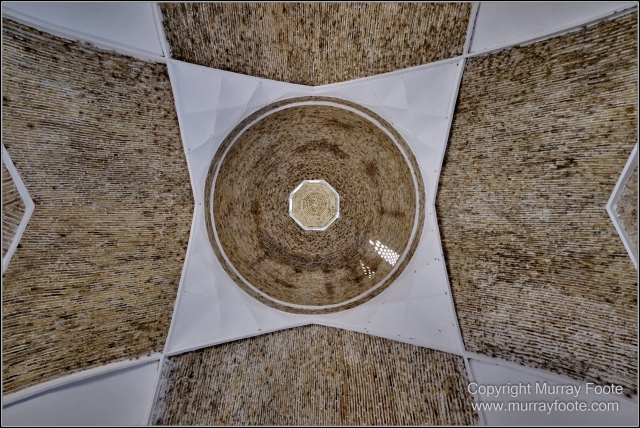 A variety of textile wonders on offer…..
.

This is the ancient Magoki-Attori Mosque.
. 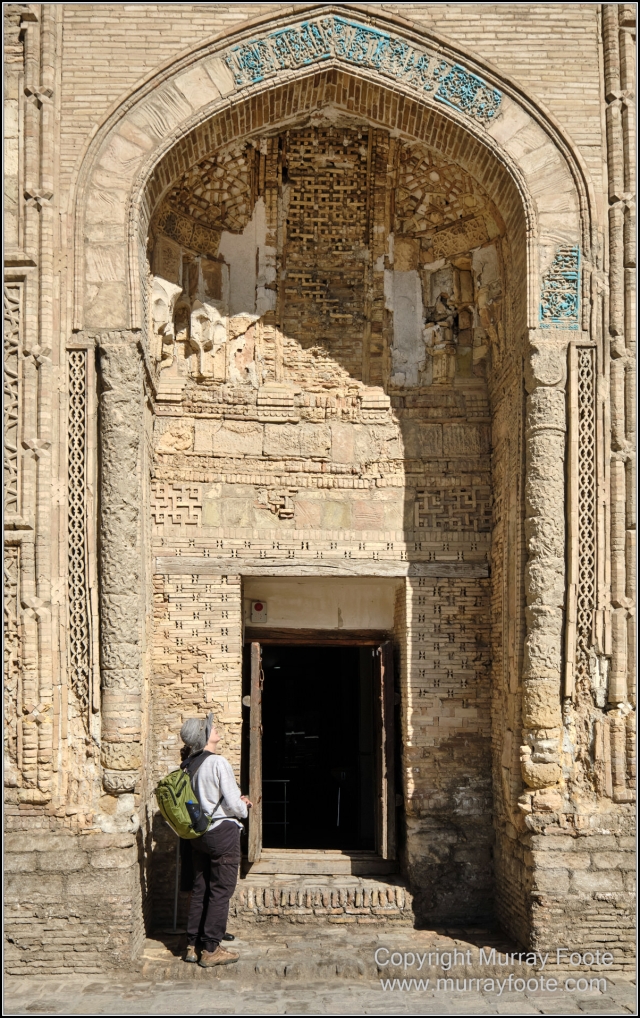 This southern entrance dates to the 12th century and you can see the trace of carved blue majolica tiles.
.

There was originally a Zoroastrian fire temple and later a Buddhist temple. The Moslem religion arrived about 650AD but its takeover was gradual. At one time both Jews and Moslems were said to have worshiped here concurrently though this may have been at different times of the day. Bukhara burnt down in 927 and the mosque was built or rebuilt at this time. It was rebuilt in the 12th century using the design of the previous mosque and restored in the 14th and 17th centuries and the 1930s and 1970s. It had to be dug out in the 1930s because over the years it had sunk below rising levels of sand.
.

It is a UNESCO World Heritage site and one of the oldest mosques in central Asia.
. 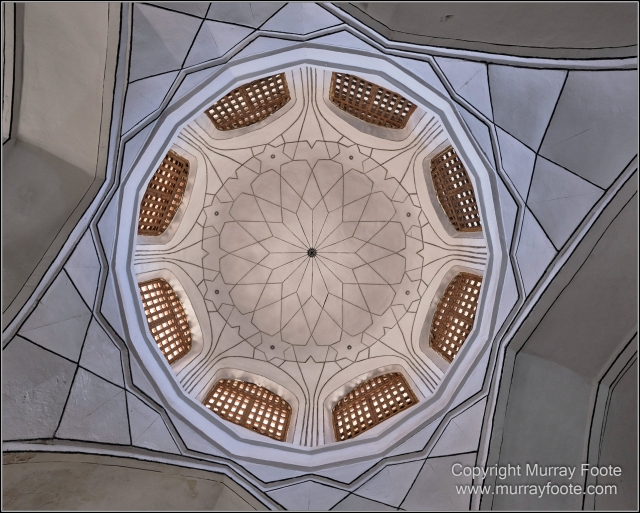 Not far away is the foundations of an ancient structure but I can’t remember what our guide said and I can not find information on what it was.

(The edge of the Toqi Telpak Furushon Trading Dome is in the background at the far right. We go there in the next post.)
.