(Click images for a larger view, as for all posts).

It’s early morning and this is the old city of Havana from the other side of the harbour.   There’s a fair amount of smoke coming from a factory funnel.  They probably don’t have the best pollution controls in Cuba so probably for the best that it’s not highly industrialised.

A merchant ship beside some mostly derelict wharves. 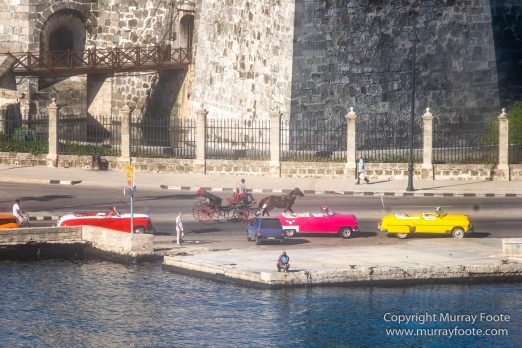 Some people, old cars and a horse and carriage in front of the Castillo de la Real Fuerza (Castle of the Royal Force), and someone in the foreground fishing.

In 1959, this was Che Guevera’s home and command headquarters at a time when the revolutionaries captured the nearby Fortaleza de San Carlos de la Cabana (a little more on that below).

It is not generally known that the Portuguese explorer Christopher Columbus and his men were actually midgets and the castles that they built have been adapted for different uses today. 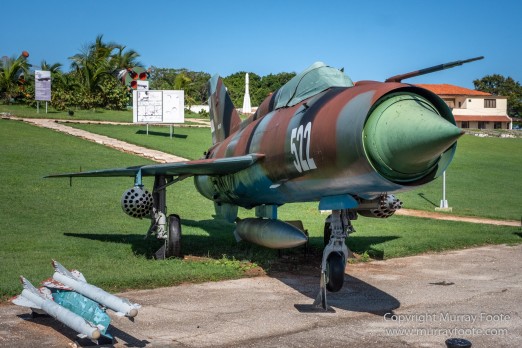 We are now in the Museo Historico Militar, dedicated to artefacts of the Cuban Missile Crisis and this is a MIG 21. 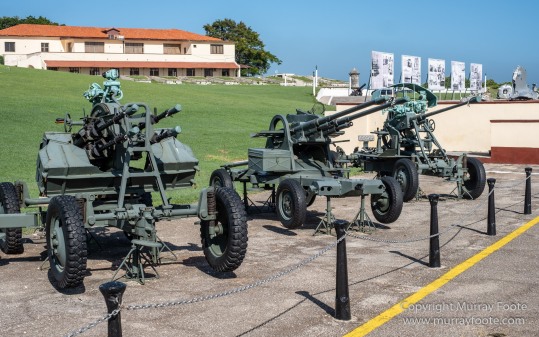 I think these must be anti-aircraft guns.

Younger readers may not be familiar with the Cuban Missile Crisis.  In October 1962, the US became aware that the Russians were building up batteries of ballistic missiles in Cuba, aimed at the US.  Kennedy resisted the military, and in particular the infamous Curtis LeMay and instead of bombing and invading Cuba, implemented a blockade.

Remains of U2 spy plane.

Then near the end of October 1962, the Cubans shot down a U2 spy plane (actually, the order was given by a Soviet Lieutenant General).  The world appeared for a while to be poised on the edge of a nuclear war.

More remains of U2 spy plane.

Fortunately, Kennedy faced down both the Russians and his own military.  Western media told us at the time that Kennedy’s machismo had forced Khrushchev to capitulate and withdraw but what actually happened was that there was a secret deal that the Soviets withdrew their missiles from America’s border in Cuba while the Americans withdrew their missiles from the Soviet border in Turkey. 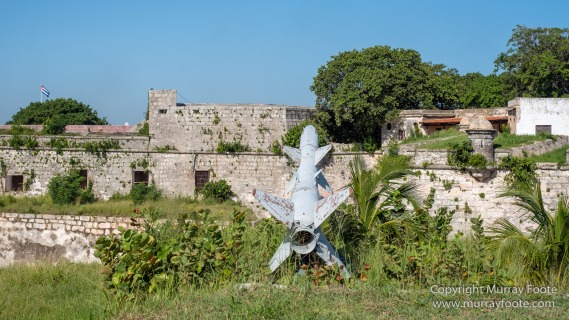 There was another noteworthy incident during the Cuban Missile Crisis.  US ships sent practice depth charges (with negligible explosive) near a Soviet submarine to try to persuade them to surface.  They sent messages to the submarine saying what they were doing but the submarine did not receive them.  Two of the three officers on board assumed that war had broken out and wanted to launch nuclear missiles.  The third and most senior officer vetoed the other two.  The submarine surfaced and steamed back to the Soviet Union.  Nuclear war did not happen that day.

Some musicians playing outside a Government Cigar Shop.  . 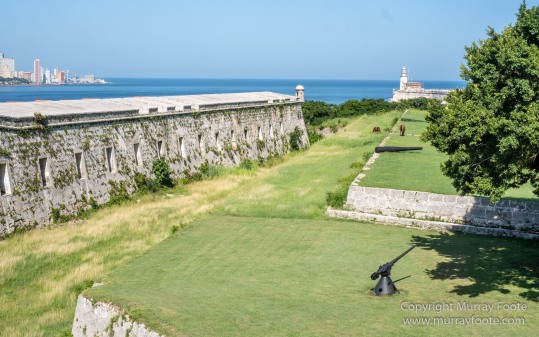 The British occupied Cuba in 1762, during the Seven Years War.  In taking Havana, They demonstrated the vulnerability of the fortress of El Morro to an attack from the land.  However, a year later, under the Peace of Paris, they swapped Cuba for Florida. The Spanish then built La Cabaña between 1763 and 1774. You can see El Morro in the distance, where the lighthouse is. 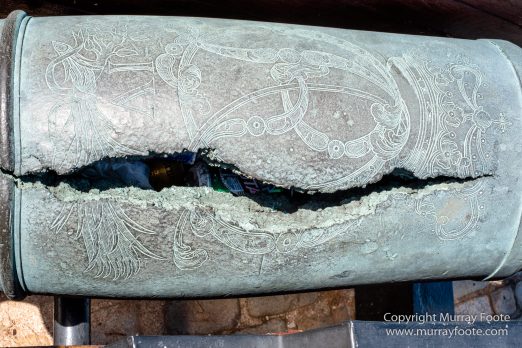 Sometimes cannons are not all they’re cracked up to be.

We have moved along and this is now El Morro including the lighthouse Faro de Castillo del Morro.

El Morro was built in 1589 (the year after the Spanish Armada failed to reach Britain) to protect Havana from raid by privateers, French Dutch and English.

Looking down on a gun emplacement, part of El Morro though outside the walls.

Objects to purchase at a roadside market including wooden boxes, horses and cars. 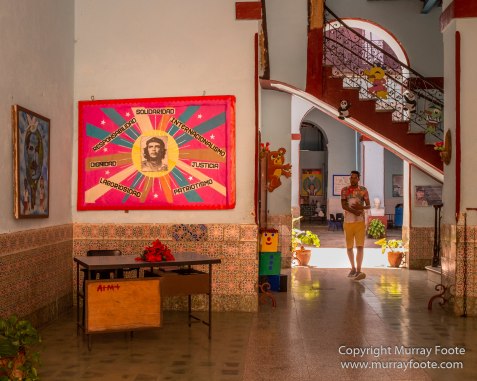 Maybe the door of the hotel.

(The comment under the sixth image is an illustration of how internet memes start).

6 comments on “Relics of the Cuban Missile Crisis”