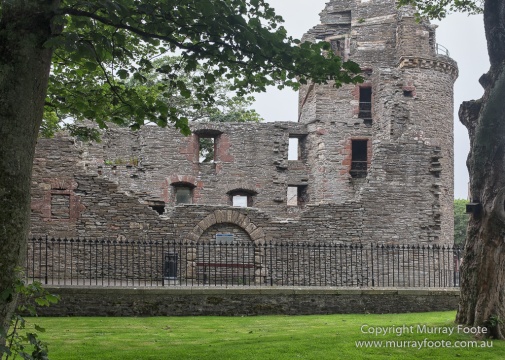 This is the Bishop’s Palace in Kirkwall, as seen from the ground of the Earl’s Palace.  Earl Rognvald Kolsson constructed the Bishop’s Palace for Bishop William the Old in 1137 or shortly after, at about the same time he started building the St Magnus Cathedral.  Originally, the Palace had a Great Hall for meetings and a tower for the Bishop’s quarters and possibly a chapel.  The remains of the original building are still visible in the lower walls of the surviving Palace.

In 1163, King Haakon of Norway came here after the inconclusive Battle of Largs which nonetheless lead to the loss of Norwegian sovereignty over the Western Isles.  The illustration at the right shows what the Palace looked like at the time and depicts the arrival of King Haakon.  He fell sick and died here, in the Bishop’s Palace.

By 1320, the Palace had largely fallen into ruin through neglect.  Then in 1541 Bishop Robert Reid began an extensive programme of restoration and reconstruction. A noticeboard at the site is confused about this.  It says “By that date, the mediæval palace had fallen into a sorry state, but it was imperative that Bishop Reid be able to defend himself and his property, particularly from his neighbour, the infamous Earl of Orkney”.  Yet there was no Earl of Orkney in 1541, Robert Stewart was only eight, he didn’t visit Orkney until 1567 and he didn’t become Earl until 1581.

The main addition Bishop Reid made was to build the round tower, known as the Moosie Toor.  You can see that in the picture above and the diagram to the right.

This image shows a section of the Moosie Toor including holes for firing from, probably with longbows, arquebuses or muskets.

We have already seen an outline of the later history of the Bishop’s Palace, in the previous post for the Earl’s Palace.  Robert Stewart gained control of it in 1568 (he was not yet an Earl).  His son Earl Patrick Stewart was commanded to give it up in 1607 along with the Earl’s Palace he had just built and was forced to actually do so in 1610.  Patrick’s son Robert briefly seized it during a rebellion in 1614.  The Bishops retained control until 1638.  In that year the Covenanters gained religious and political power in Scotland after militarily defeating Charles I.  They abolished Episcopy and Bishops along with that, so there were no Bishops to occupy the Palace.  In 1653, the Bishop’s Palace was used to house Cromwellian troops.  After the Restoration, Charles II restored Episcopy and therefore the Bishops.  A Bishop returned in 1671 but 1688 saw the final abolition of Episcopy and the gradual falling into ruin of the Bishop’s Palace. 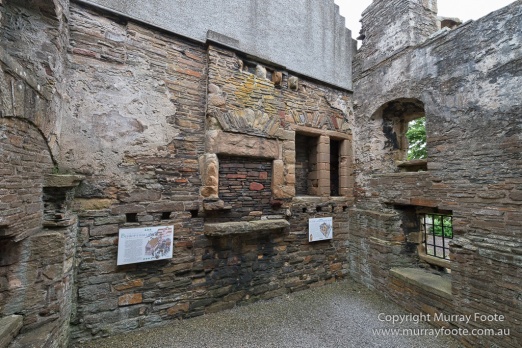 This is the entry chamber, with entry from the street at the left.  The modern concrete at the top is part of an adjoining house.  You can see the holes for the beams where an original floor would have been.  The feature in the middle looks like a bricked-in fireplace for which the chimney no longer exists.

This is the Great Hall of the Bishop’s Palace.   There would have been a wooden floor (now missing) over a lower level.  There appears to be holes for beams along much of the wall so there was presumably another floor up there.  We are looking towards the end where the Bishop’s table would have been.  The original tower with accommodation for the Bishop was to the right at the end, though that tower no longer exists.  The remains of the Moosie Toor is at the end to the left, where there would have been extra accommodation.  The spire of the St Magnus Cathedral is in the background. 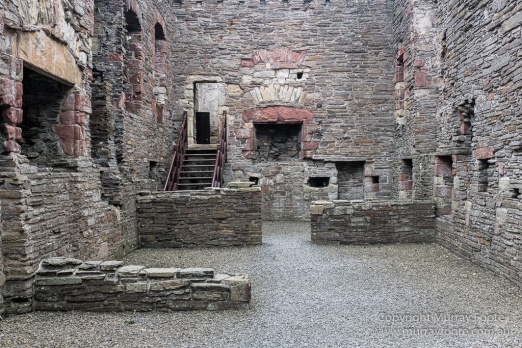 This is the view looking in the opposite direction, towards the public entrance.

The drawing shows this view at the time of Bishop Reid and there is a wooden partition before the end of the hall.  After Earl Robert Stewart too over the Palace, he partitioned the Great Hall into multiple rooms for ancillary accommodation.

This is a room inside the Moosie Toor at first floor level.