We made a special return to the Met to catch the opening of an Islamic Art exhibition.

After a seven-year search for the future Shah, the persistent Iranian knight Giv finally discovered the prince Kai Khusrau.  Faithful to the story, the painting features an idyllic spring landscape, the remoteness of which is indicated by the barren hill in the background.  The black pool next to Kai Khusrau and the stream flowing away from it would have originally been silver, which has now tarnished.

Shah Shangul asked Bahram to rid the world of a monstrous rhino-wolf, which tore the hearts from lions and the skin from leopards.   Bahram strung up his bow and sped towards the rhino-wolf, pouring a mighty hail of arrows onto the beast.  In this painting, the image of the rhino-wolf breaks through the rulings of the painting into the marins, lending the composition dynamism and suggesting the extension of the setting beyond the confines of the page. 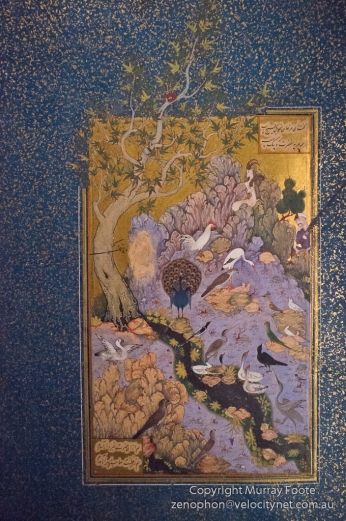 The Concourse of Birds
by Habiballah of Sava c. 1600

The poetic text of ‘Attar’s @Mantiq al’Tair comprises a series of parables narrated by the Hoopoe, who leads a gathering of birds on a difficult journey to find the mythic Simurgh.  Perhaps the best known image from the manuscript, this folio illustrates the small, crested hoopoe bird addressing his companions before their departure. This charming painting is one of four added to the original manuscript in the early seventeenth century at the court of Shah ‘Abbas (r. 1587-1629) and is signed by the painter Habiballah.

5 comments on “Islamic Art Exhibition at the Met”