We knew when we signed up for the tour that there was no guarantee that we would see a snow leopard.  It was also not a good year for the purpose because there had been unusually light snowfall so the snow and the snow leopards were much higher and further away than usual.  However, this was the day when we found the missing “S” and “W” to turn “No Leopards” to “Snow Leopards”.

We were just emerging from our tents for breakfast after our first night in the new campsite at the head of the Rumbak valley when the cry of “Snow Leopard!!!” rang out from the small plateau about thirty feet above us.  So we grabbed cameras and raced up there (relatively speaking and perhaps inadvisedly, given the altitude).  Three of our guides were up there with spotting scopes and we were able to take turns to look through them and see snow leopards.  There was a mother and two cubs and she was conducting a learning exercise in “how to hunt blue sheep”.  One of the cubs ran at the blue sheep too soon though, so the blue sheep ran away.  I didn’t see that but I did see a snow leopard run across my vision as I was looking through a spotting scope.

Here is an image containing a snow leopard (towards the top left corner) courtesy of expedition photographer and doctor Andrew Peacock (For his photography see footloosephotography.com).  He is using a high resolution full-frame Canon camera, a 600mm lens and a 1.4x teleconverter for a focal length of 840mm.  I estimate from Bing Maps and Google Earth that the snow leopard was about two kilometres away.  If you want to see it more clearly, click on the image.

In theory I could have got an image nearly as close albeit with a smaller, lower resolution sensor and not quite so stellar a lens but my lens was damaged and wouldn’t focus for far distances.

We could see more clearly through the spotting scopes which had a much higher magnification than 840mm, probably equivalent to 3000mm and perhaps 4000mm.  At other times through the scopes I saw blue sheep, golden eagles and a bird with a white head and black body that was described as potential food for the golden eagles and was probably a Himalayan Snowcock. 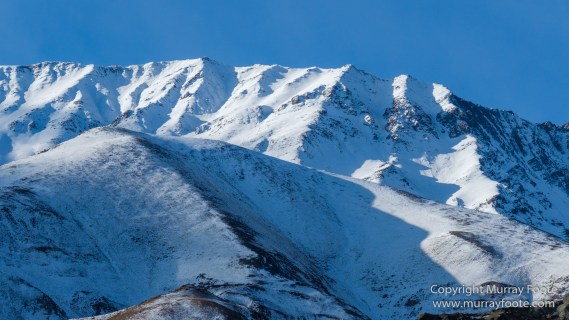 There were also more distant snow-capped peaks visible from where we were viewing the snow leopards.

This is a red-billed chough (not actually in focus at larger magnification).  It is similar in appearance to the white winged chough that we have in Australia (and in the reserve out the back from where I live) but they are only distantly related.

After lunch we took off seeking more snow leopard sightings.  From a similar viewpoint to where we views the snow leopards, here are some ponies returning to Rumbak village.

Footprint of a Tibetan wolf.

Where I have circled in red is either another snow leopard or probably the same one, though we are up a different valley and several kilometres from out first sighting.  This is at 560mm or a full-frame equivalent of 780mm, so the snow leopard is a long way away.  This is taken with my lens so it is out of focus.  Even so, at 1:1 I can just make out, though blurred, a head and ears above the rock line and a body and legs below.  You will not be able to see this even if you click on the image for a larger view.

A plant struggling to survive though covered by the icy river.

Apart from the snow leopards, there were also dramatic views available of mountains and coloured rocks.

This one has a chimney so it is clearly an old house and associated pen.

13 comments on “Glimpses of Snow Leopards”