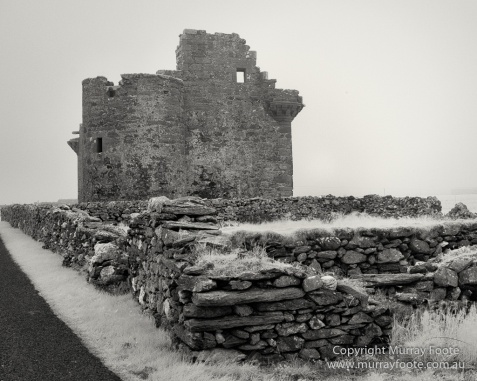 Muness Castle is named after Mu Ness, a nearby headland.  It was built in 1598 by Laurence Bruce, half brother to Earl Robert Stewart (sharing the same mistress of James V as mother). 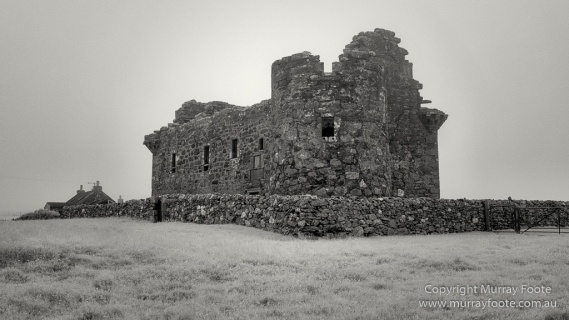 In 1571 Earl Robert appointed Laurence as Foud (anglicised as Sheriff) of Shetland.  Laurence developed an unenviable reputation for corruption and cruelty.   He undertook acts of piracy on passing shipping, changed weights and measures to increase his income and fathered 24 local illegitimate children by imposing feudal “rights” on local women.

He was removed from his post in 1577 after complaints from residents led to a Commission that visited Shetland and took evidence from 700 male Shetlanders.  Notwithstanding this finding and a prohibition by the Commission of his further living in Northern Scotland (i.e. north of the River Tay), Laurence returned the next year when he was appointed Sheriff-Depute by Earl Robert.

After Robert died in 1593, Laurence did not have such good relations with Robert’s son Earl Patrick Stewart and this led to building Muness Castle in 1598.  In 1608, Earl Patrick turned up with 36 men and artillery, intent on destroying the castle, but withdrew for unknown reasons before completing the task.  Laurence was amongst those who testified against Earl Patrick in his trial in 1610 and he died in his bed in 1617.

This is a cottage very close to the castle, with an adjoining dry wall shed that seems to have fallen into disrepair.

The castle was sacked by French raiders in 1627 and though rebuilt was no longer occupied by the end of that century.  It was finally abandoned in 1750 and the roof had disappeared by 1774. 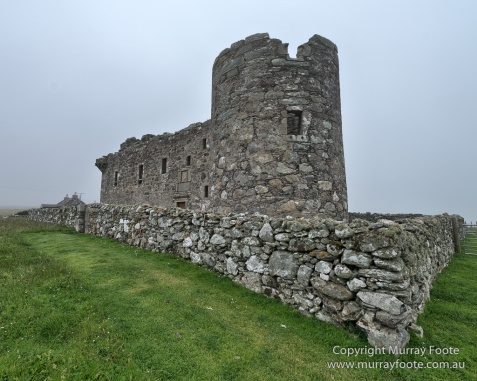 The way in to the gate is mown and you can see the entrance door behind the wall to the right of the gate.

This is how the castle may have looked in 1600.  The top floor and the roof are now missing.

Above the main door is a nearly obliterated coat of arms and an inscription that reads (after translation from archaic spelling):

Listen you to know this building who began
Laurence the Bruce he was that worthy man
Who earnestly his heirs and offspring prays
To help and not hurt this work always.

He had good reason to be nervous about the longevity of the castle. 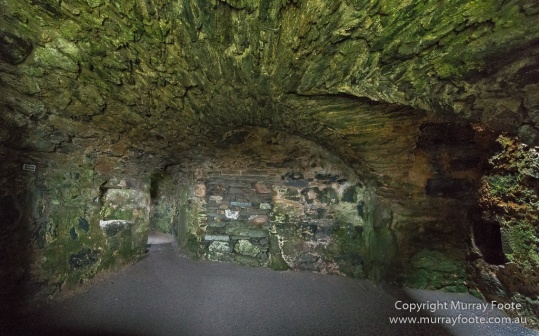 This is the kitchen, on the ground floor. 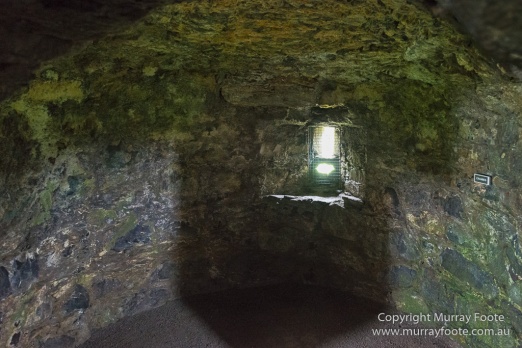 This is a chamber, or bedroom, also on the ground floor.  You can see from the circular walls that it is in one of the towers at each end of the building.

Stairway to the second floor.

This is the main fireplace in the great hall on the second floor.

Here is what that hall may have looked like when in use.  I would think that peat was a more likely fuel than logs, though.

This is a chamber or bedroom on the first floor, once again in one of the towers.  You can see where the floor was for the floor above.

This is probably the smallest window you are ever likely to see, on the first floor, intended for use by musketeers.

Looking through to the Great Hall, and the doorway to the room beyond.

The Lord’s Private Withdrawing Room, off the Hall with a private staircase leading to his chambers above.  The gaps in the surface of the wall are where the front of a chimney has fallen away.

A different “double window” in the larger circular tower.

Looking straight up in the tower. 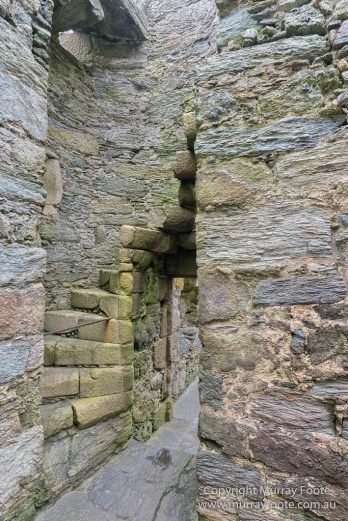 Probably the stairway to the no longer extant second floor.