When we returned from the St Kilda cruise to Oban, I was not far from my next destination but my rental car was still on Mull.  So I took the ferry to back to Craignure on Mull and drove back to Port Appin the long way.  This is Sgeir Bhuide Lighthouse taken from a Port Appin Hotel where I had a meal and near where I was staying.  It looks as though it is on the point but it is in fact on a rock some distance behind.

And this is Castle Stalker, which I had come to see.  You can go inside but the tours are once a week and did not coincide with my visit.

Loche Linnhe with Sgeir Bhuide lighthouse again, in the middle distance.  The original lighthouse was built in the late nineteenth century but this is a replacement one from 2002.

Castle Stalker was built in the mid-fifteenth century, replacing a smaller fortified building which had been built around 1320.  It is a monolithic keep, typical of early Scottish castles.

For nearly the first two hundred years, it was in the hands of the Stewarts, relations of the Scottish royal family.  Most of the lairds in the first hundred years ended up murdered by people from rival clans, which says something of the times and why they needed to have castles.

In 1620, the castle changed hands to the Campbells as a consequence of a drunken wager by the seventh Stewart laird, and in exchange for an eight-oared wherry (or cargo boat). 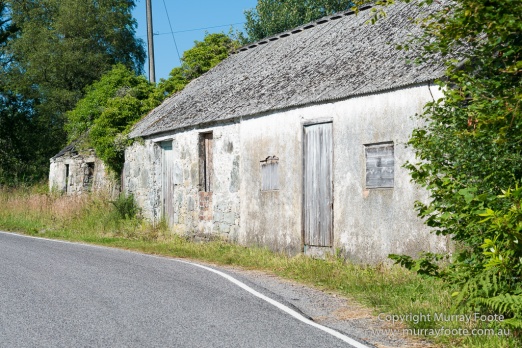 Old buildings beside the road

In 1689, the Stewarts retook Castle Stalker as part of a campaign for James VII of Scotland (James II of England) against William and Mary.  The Campbells regained it in 1690 following the Stewart defeat at the Battle of Dunkeld though it took a seige of several months.

In 1840 the roof either fell in or was removed to avoid roof tax and the castle was abandoned.

In 1908 a Stewart bought the castle back from the Campbells and the castle was restored in the 1970s.

This is a multiple-image panorama.  Click to zoom around in a much larger image.

The mountains in the distance are the far side of the Loch Linnhe (an estuary, not a lake).  The green area in the middle distance is the Island of Lismore on which there was a monastic settlement from about 563AD.  The land on the mainland on the left is Appin, from the Gaelic Apuin, which means “Abbey Lands”.