Late in the afternoon of the 27th we were near Ahu Akapu, north of Hanga Roa when we noticed that there were many unheralded petroglyphs on the rocks near both sides of the road.

This one is probably a frigate bird, with the head and beak at the top and the tail at the bottom.

The bird petroglyphs are clearly related to the tangata manu or birdman petroglyphs we saw when we visited Orongo, which is about 10 kilometres south. 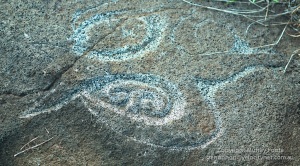 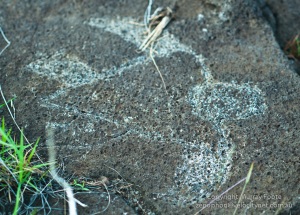 Perhaps an eel or a fish to the left; a turtle to the right.

Keeping humans off the petroglyphs is one thing, horses are another.  There are many horses and cows wandering around the island.

We visited the east coast petroglyph site Papa Vaka the next day.  Papa refers to flat lava and vaka is canoe.

This is Papa Mango.  You can see a tahi or tuna at top left and below and to the right, a mango or shark. 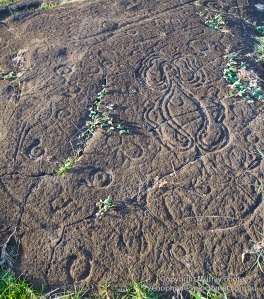 To the right is Papa Mangai.

Towards the top right you can see what may be an octopus, a crab or a mythical sea creature.  An octopus seems most plausible to me.

There are also numerous mangai or fish hooks.  Uniquely in Polynesia, some Easter Island fish hooks were made of stone.

Above and to the right is Papa Vaka, the largest petroglyph on the island at 12 metres long, with two long curved lines representing a double canoe.

I have been showing you the Rapanui moai, ahu, other constructions and petroglyphs.  The Rapanui had many other artistic expressions of their culture, probably little of which survives from earlier times.

There were wooden carvings made from wood of the totomiro tree or driftwood and these became more common and more numerous in the nineteenth century when metal tools and outside sources of wood became available.  Wood carving subjects included animals, human/animal blends (including birdman figures) and human representations.  Human representations could be highly stylised (such as the gaunt moai kavakava which may have represented spirits of dead ancestors) or surprisingly realistic (though still including subcarvings with stylistic and cultural references).  Bark cloth images were more highly prized because barkcloth was harder to come by.  You can see a few examples here.