Orongo was the focus of the Birdman cult on Easter Island. On the afternoon of the 21st of April, we went up to check it out but found the gates about to close. There were still some interesting things to see.

Orongo is on the lip of the crater of the extinct volcano Rano Kau.  This is a section of the crater lake.  It looks as though you could walk down there but in fact the “islands” are floating rafts of vegetation so it is not recommended (and prohibited, anyway).  This is also indirectly the main water source for Hanga Roa.

I was struck by this view as encapsulating the isolation of Easter Island.  There are thousands of miles of empty ocean out there…. 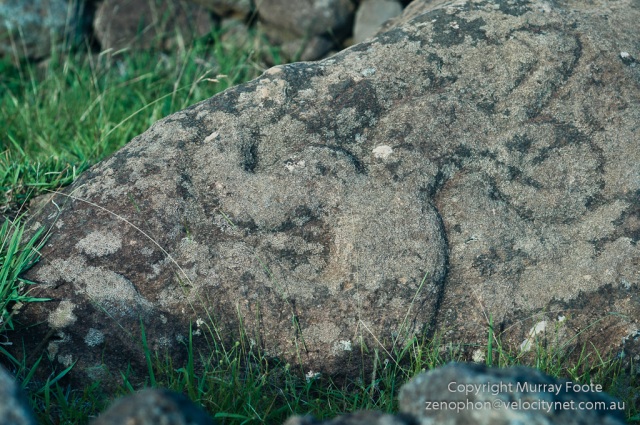 So there we were on Easter Island, at Easter, in the Chinese Year of the Rabbit and looking down near Orongo we saw what appeared to be clear evidence that the Easter Bunny originated in Easter Island….

Enough of the sacrilege.  In fact, it’s a representation of Tangata Manu, or the Birdman, the manifestation of Make Make on Earth.  It has the body of a man and the head of a frigate bird.  The hooked beak is at the top and the head and the eye is below that, at top right.

After the decline of the ahu and moai building age, between say 1500 and 1722, the Rapanui switched from worshipping the many ancestors to worshipping Make Make.  Orongo was the centre for this, involving some remarkable ceremonies.

In effect they replaced a situation of catastrophic violent competition between rival tribes with an annual selection of a paramount chief by a trial-by-ordeal process.  Every year in about July, the different competing groups provided candidates (hopu manu) who climbed down a cliff and swam out to an island where seabirds were starting to nest.  The first to make it back with an unbroken egg strapped to their forehead handed the egg to their tribal leader who became tangata manu (bird man) or paramount chief for the next year.

The tangata manu then became tapu for the next year.  He was painted white, lived in isolation in a special house and no-one could touch him for the year.  The hopu manu was also tapu in a similar way.  Tapu means sacred or taboo and can apply to places and food resources as well as people.  The same word exists in Maori, and probably throughout Polynesia.

The bird associated with the cult appears to have originally been the frigate bird, which no longer nests on Easter Island.  By the later period of the cult the bird became the manutara or sooty tern.

… So next morning, after the gates opened, we turned up at Orongo.  Unfortunately photographing there at sunrise or sunset is not possible.

This is one of the restored houses at Orongo.  There would have been quite a few people living in them while the competition was going on and there were originally around 50 houses. They date back as far as 1500AD.  A small basalt moia removed from one of these houses in 1868 is now in the British Museum. 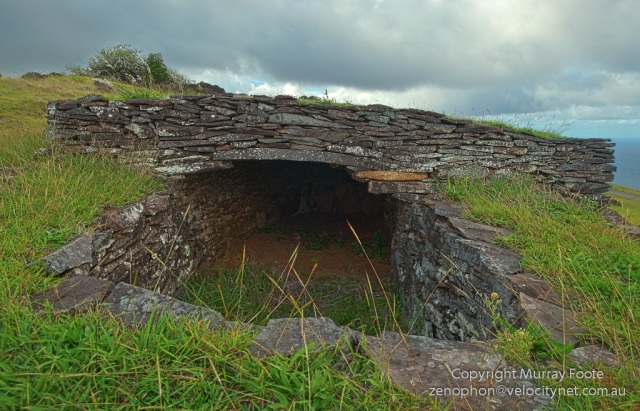 An Orongo house in cross-section

Here is one that is left in part-restored condition so you can see the method of construction.  They would have been quite dark inside. 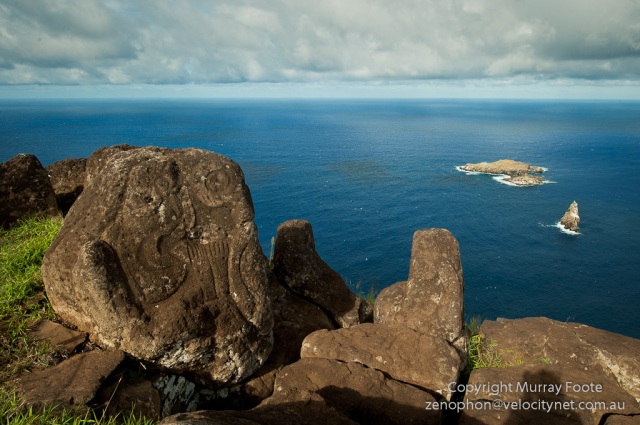 Petroglyphs and the islands - the swim

The petroglyphs on the large rock include I suspect a manutara on the left and a depiction of make make to the right (wrapping round the rock out of sight and with an eye near the top right corner).  There are around 1800 petroglyphs at Orongo.

The hopu manu descended the cliff near here and then swam out to Motu Nui, the largest and furthest of the three islands.  The cliff is about 300 metres high and the swimming distance is about 1.6 kilometres.  Hazards included falling off the cliff, sharks and other competitors.  They stayed perhaps for weeks on the island, sheltering in caves until the birds started laying eggs.  Then the swim back with an egg….

Moto Nui is the far island above. There are more than 20 small caves on the island, 8 with paintings or carvings.  There are the remains of an ahu on the island and there was once a small moai.  It is possible to visit by boat but there is no safe landing point.

Click on the Moto Nui image to get a good idea of the scale from a boat and divers at the right end of the island.  This launches to a new tab with full detail.  There will be three icons at the bottom right:

Also, if you click on the image of Motu Kao Kao to the right and zoom in, you can see five birds that appear to be manutaras on the very top.