Walking past the twin domes of the mausolea at Dor-ut Tilovat.

Shakhrisabz is one of the oldest cities of Central Asia, at more than 2,700 years old.  It was called Kesh and was one of the capital cities of Sogdia (or Sugd), and Kesh was the capital city of all Sogdia at some times.   Sogdia, though, was more a loose confederation of cities than a centralised state.  In terms of current borders, it was in Eastern Uzbekistan and Western Tajikistan, with some encroachment into Kazakhstan and Kyrgyzstan.   Other Sogdian Capitals were Buhkara, Afraysiab (now Samarkand, which we will visit next) and Khujand in Tajikistan.

Sogdia was independent during the first half of the first millennium BC until it was conquered by the Persian Emperor Cyrus the Great around 540BC.  It was then independent again from about 400BC, when it freed itself from the weaker reign of Ataxerxes II.  This was at the time of the unsuccessful rebellion of his brother Cyrus the Younger, who died in a battle that he otherwise would have won.  Greek historian Xenophon, one of the leaders of the ten thousand Greeks that supported Cyrus, wrote Anabasis, an account of the battle and the subsequent story of the Greeks fighting their way back to Greece.  Egypt revolted at the same time and the last native dynasties retained independence for nearly 60 years (Persia had occupied Egypt since 525BC).  Ataxerxes was probably too busy unsuccessfully trying to retake Egypt, dealing with the later Satrap’s Revolt, and interfering in the conflicts of Greek city-states to focus on retaking Sogdia.

Walking through the gardens, no doubt to an ancient plan but recently planted.  Gardens are always an essential part of Islamic public architecture.

Alexander the Great then conquered Sogdia in 327 BC.  At this time, the last Archmaenid Emperor, Darius III is said to have been murdered near Kesh, retreating to the edge of his empire after military defeat.   Alexander’s famous paramour Roxane was also a Sogdian princess.  Sogdia became part of a succession of various empires, including Selucid, Greco-Bactrian, Kushan, Hephalite and Sasanian.  It still retained its identity and culture.

The birth of Sogdia was also associated with the formation of the Zoroastrian religion but Sogdia came to be an area of religious tolerance, also allowing Buddhism, Manichaeism, Judaism and Nestorian Christianity until Islam slowly took over from the eighth century AD. 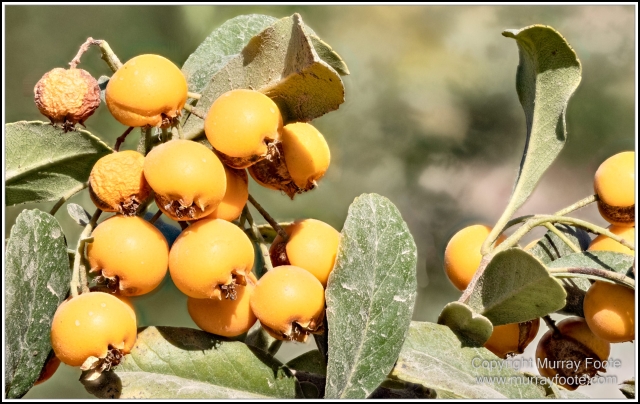 The Sogdians were also great traders, travelling the Silk Road from China to Byzantium and becoming prosperous as a consequence.  In 128BC, in the declining days of the Greco-Bactrian Empire, the Chinese succeeding in pushing through to Sogdia and successfully besieged the capital Alexandria Eschate (Fergana Valley, present-day Uzbekistan). They were after larger more robust horses so they could successfully combat and defeat the Xiongnu Khanate, a massive Mongolian empire of the ancestors of the Huns. This helped to open up the Silk Road, including for Sogdian participation. 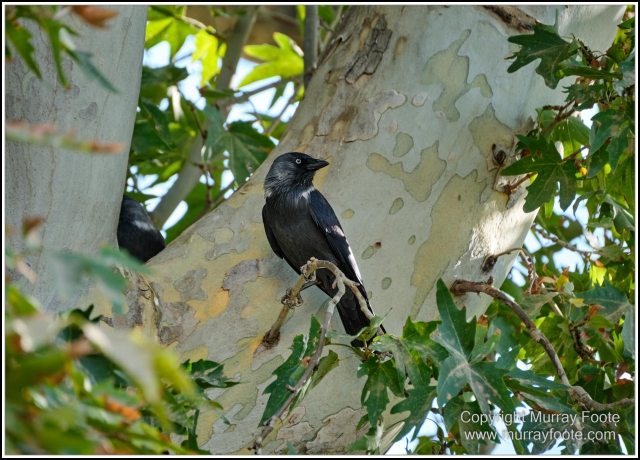 The Han dynasty did not remain in the area for long but in the first half of the eighth century AD, the Tang dynasty had expanded so it was bordering on Sogdia.  However in 751 they were defeated by the Abbasid Caliphate (Persian-based Moslems).  Then in 755 came the An Lushan Rebellion which ultimately failed but hugely weakened Tang China. There had been a significant Sogdian community in China for many years, including some in influential positions.  But because An Lushan was part Sogdian, a Sogdian identity became less politic and they blended into the general population.

While Sogdians were of Iranian origin, the Uzbeks are Turkic, so Sogdia gradually faded away after the Islamic takeover and the current inhabitants of Shakhrisabz are not Sogdian and do not speak a Sogdian language.  However, over the border in Tajikistan, Sogdians survive in the form of the Yaghnobi people in the Sugh Province, who also speak a language descended from Sogdian.

Khazret Imam Mosque on the right (a working mosque we did not visit).

All the buildings we will see are from much later than Sogdian times.   Shakhrisabz was the birthplace of Timur the Great (Tamerlane).  He had magnificent building projects here and for a while considered making it his capital.  So the buildings are from the fourteenth to the nineteenth centuries.

Looking up inside the mausoleum. 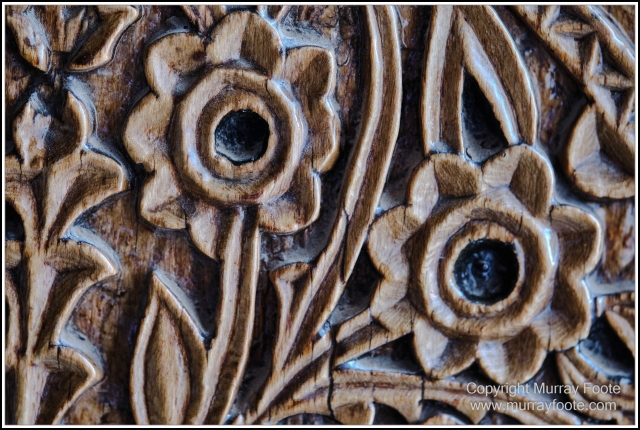 This image and the next are probably details of the same door. 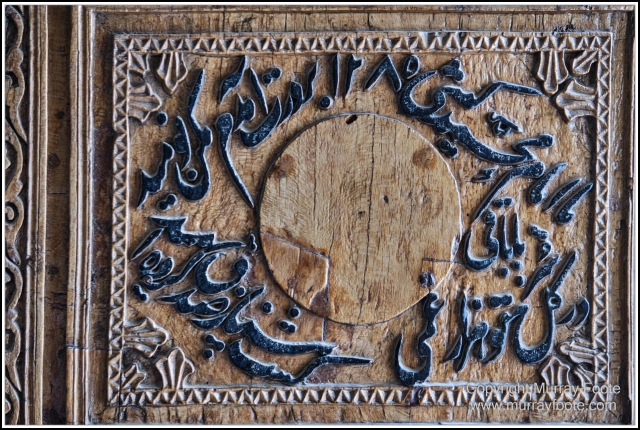 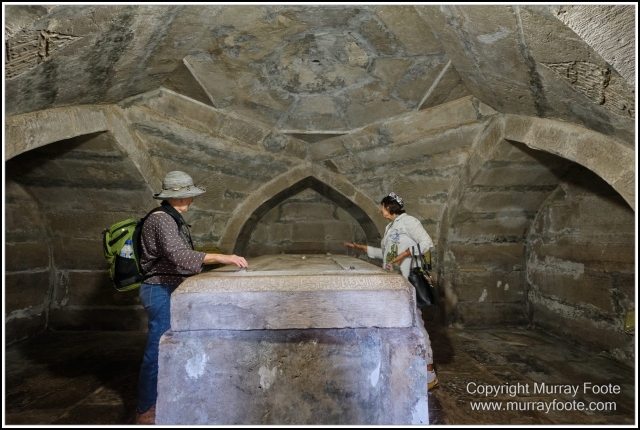 This was to be Timur’s tomb.  He wanted something small and simple but his successors gave him instead the magnificence of Gur-Emir in Samarkand (coming up, in a while).  He was never interred in this sarcophagus.

Dor-us Siyodat was to be the burial place of Timur’s family.  Construction started in 1379 and two of his sons were buried here but most of the complex was destroyed by Bukharan ruler Abdullah Khan II in probably the 1570s and only Jakhongir’s mausoleum survived. 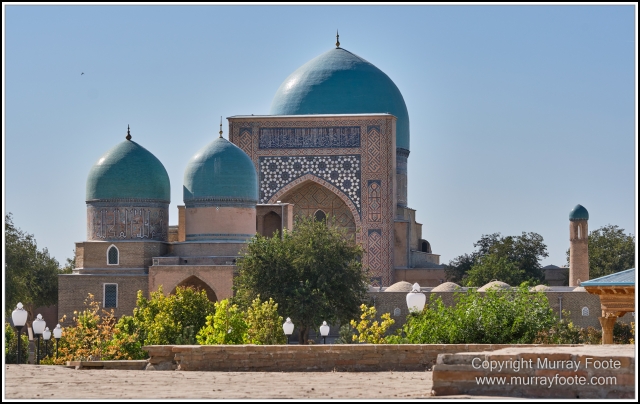 We are now inside the mausoleum of Shamsidden Kulol.   He was a potter, philosopher, theologian and scholar and the founder of Sufism.  He was also the primary spiritual and intellectual influence on Timur.  This is Timur’s testimony to him and and its elegance is breathtaking. 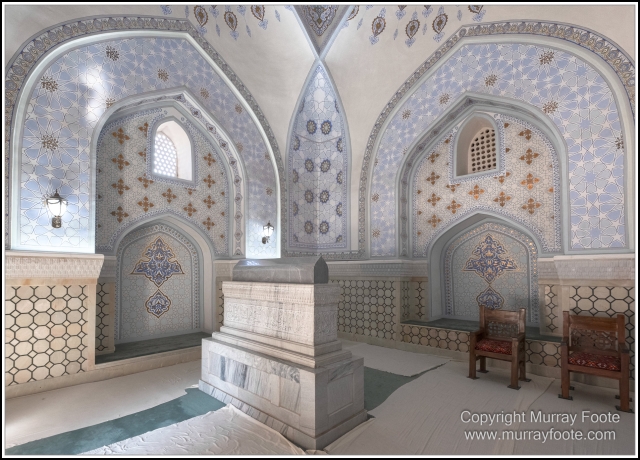 This is underneath the other cupola, built by Ulugbek for his descendants, though it is not clear whether any were ever buried here.

This image and the next two are details painted on the interior walls of the mosque. 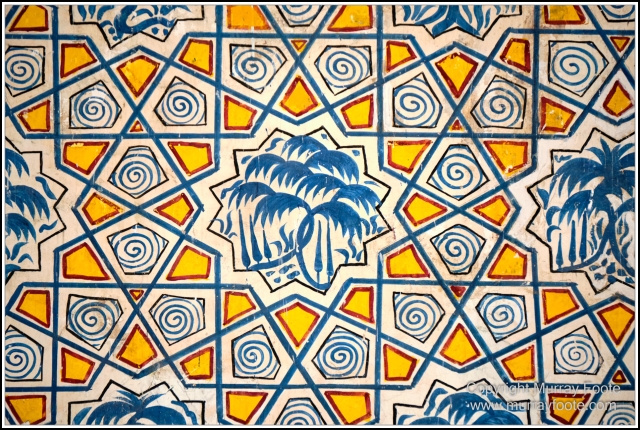 These palm trees are the calling cards of the original Indian and Iranian designers..

There is a large courtyard between the mausolea and the mosque.  We are looking across that courtyard, either to the madrassah or back to the mausolea. 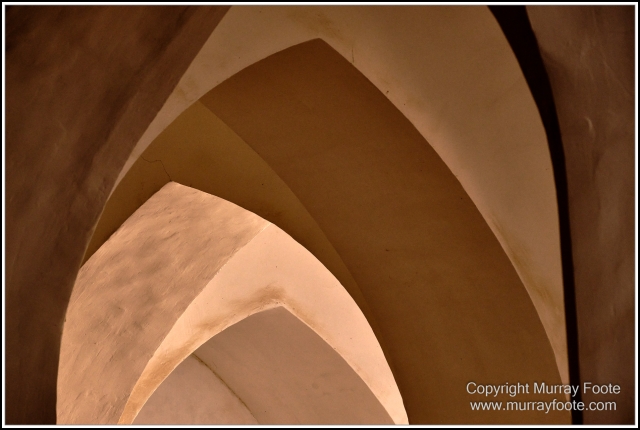 Arches in a corridor inside the mosque. 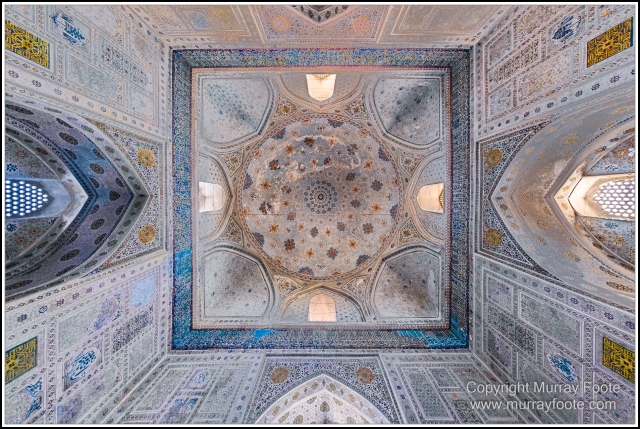 The three final images are inside the Kok-Gumbaz (Blue Dome) Mosque built between 1435 and 1436 by Ulugbek in honour of his father (and Timur’s son) Shah Rukh. 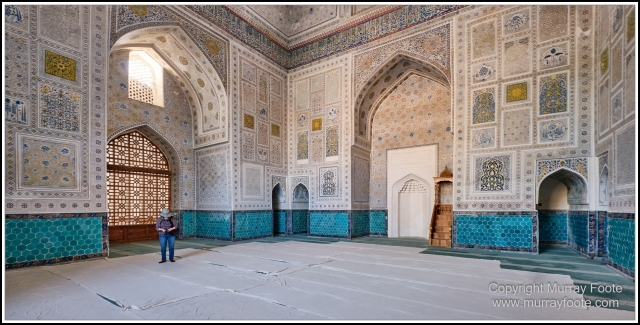 The recess in the white rectangle is the mihrab which indicates the quibla, or the direction to face in order to pray towards Mecca.  The minbar, or the imam’s pulpit, is just to the right of the mihrab.

It was built on the foundations of an older mosque from the Karakhanid era (900 to 1200) and originally had a much larger dome.  That collapsed in the late eighteenth century and was rebuilt two hundred years later.  Judging by the apparent imperfections of the interior of the dome, they must have used original materials where possible.

6 comments on “Kesh, Sogdia, Timur and a Sufi”