This is the pishtak (or portal) as viewed from the side.  It is 35 meters (115 feet) high, enclosing an arch 18 metres (60 feet high).  I don’t have an image of the pishtak from the front as we didn’t approach it from that direction.  Behind that entrance as you walk through it (i.e. off beyond the left side of this image) there is a large open space and then the Bibi Khanum Mosque.  There are two small mosques on each side and it is all enclosed by an outer wall. There was also a considerable enclosed area between the open space and the enclosing walls, though this is now gone. 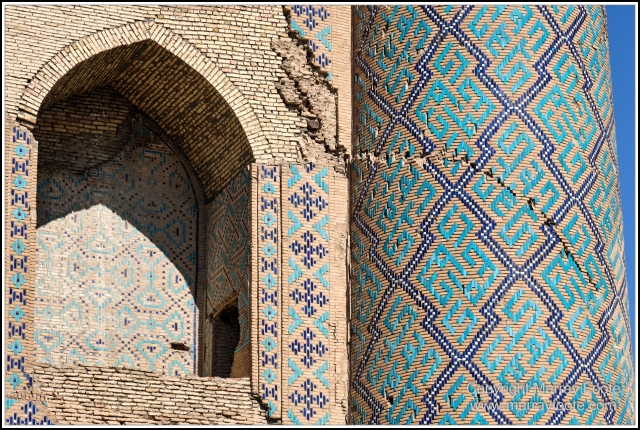 This is a seismically active area and here we may be looking at the handiwork of the earthquake of 1897. 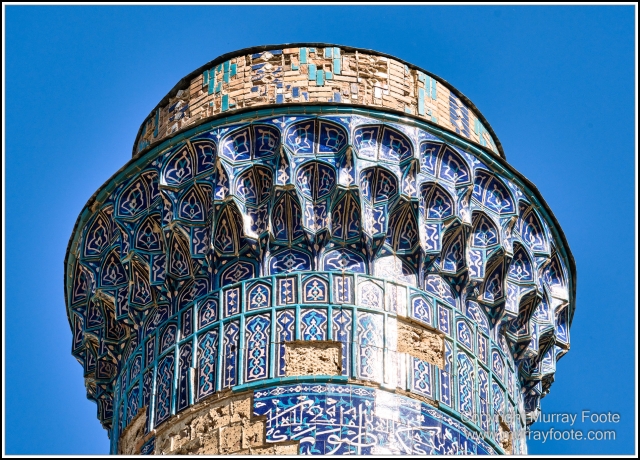 Looking up at the top of that minaret. 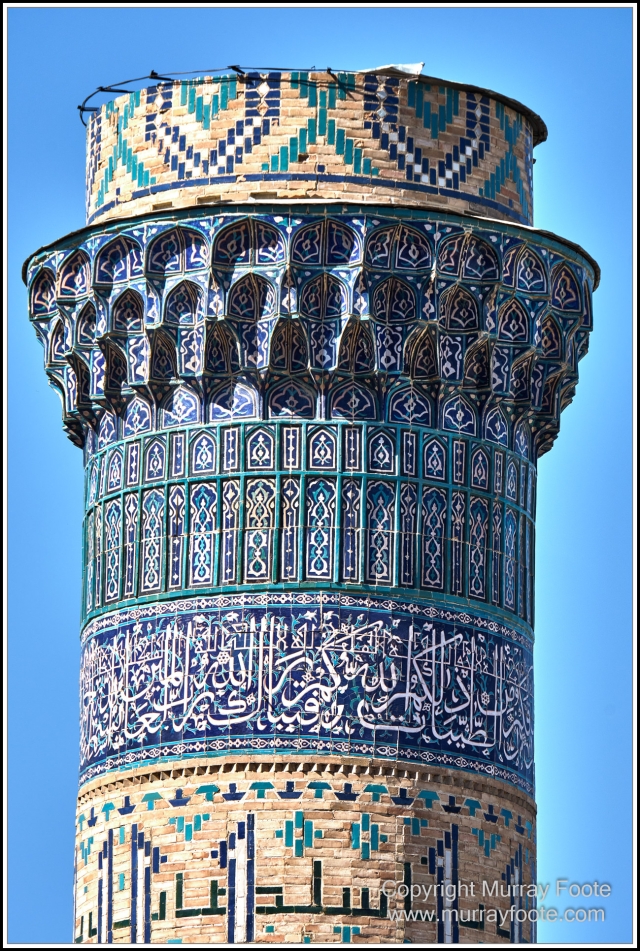 The top of another of the minarets.  I’m not sure which one.  There are four. 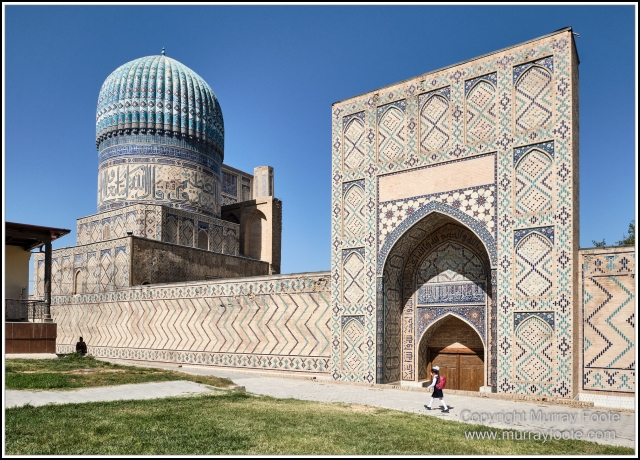 This is the dome of one of the side mosques, seen from its rear. We must have entered to the left of here somewhere.  There were several periods of reconstruction though none in the eighteenth or nineteenth centuries.  You can see that much of the door is below ground level.  This is not the original wall; that presumably matched the door and the surrounding ground level has raised significantly, perhaps due to sand blowing in from the desert.

Detail of Majolica tiles on a wall. 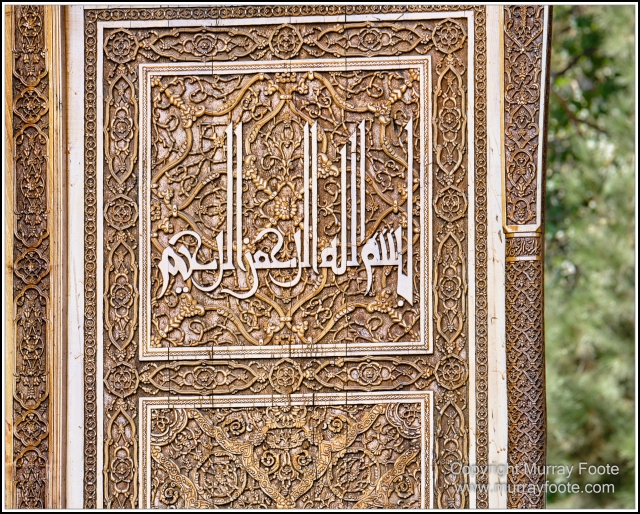 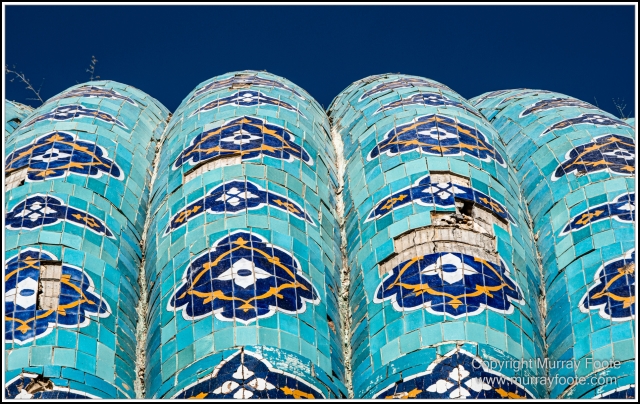 Looking up at the dome of the one of the minor mosques at the sides. 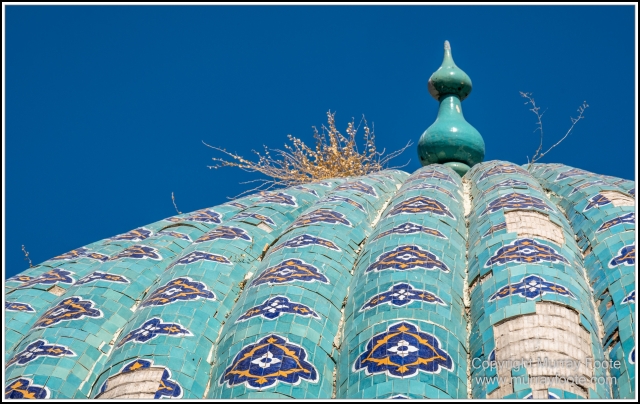 The top of the dome of one of the minor mosques.  I don’t recall climbing up there for a closer view so my guess is that this was taken from the ground with a telephoto lens.  I will probably not recoil from this hypothesis even if someone can produce a photograph of me with my camera on top of the dome.

This is the dome of Bibi Khanum Mosque, from a distance.

The mosque is the largest in Central Asia and was easily the tallest building in Samarkand until the twentieth century.  Construction started in 1399, using plunder from the capture of Delhi in 1398.  In 1404 Timur decided the main pishtak was not high enough, ordered it torn down and rebuilt and executed those who had been overseeing the construction.  He took charge of the construction himself and directed it to proceed in all haste.  Construction stopped in 1405, the year he died.  By then, bricks were already falling from the ceiling onto the worshippers.  The structure slowly deteriorated due to some combination of construction haste, insecure foundations, poor materials and inadequate engineering.  Ineffectual efforts to maintain it were made until the seventeenth century. Then it was slowly stripped of marble and other valuable materials by locals for their buildings.

The Mosque is generally said to have been named in honour of Timur’s favourite wife, Saray Mulk Khanum though it is also possible it was named for her mother.

A detail of the dome’s tiles. 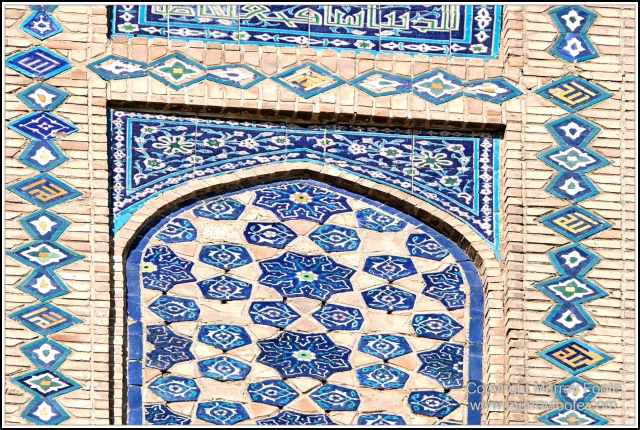 Details of majolica tiles and brickwork, probably from the vicinity of the main mosque. 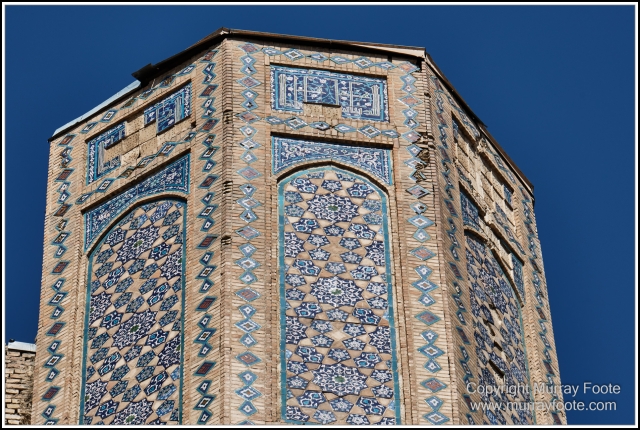 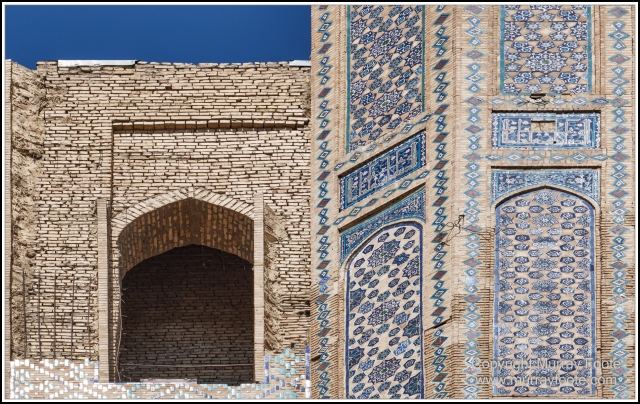 In the background is the rear of the pishtak or entrance arch for the Bibi Khanum Mosque (as distinct from the pishtak for the whole complex).  In the foreground is a Koran stand for a massive ancient Koran, donated by Ulugh Beg, that originally stood inside the mosque. That Koran was appropriated to St Petersburg by the Russians in the nineteenth century and restored by the Russians in the twentieth century, though not to the now-ruined mosque here. 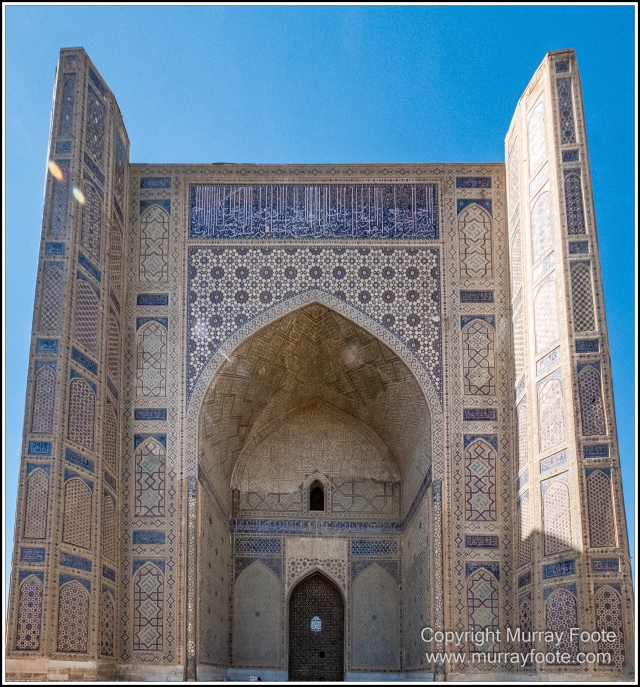 And here is a view of the pishtak from straight in front.

We saw the spectacular magnificence of the mosque in the Ulugh Beg Madrassah in the Registan in the last post, and of Gur Emir (Timur’s Mausoleum) in the post before.  This is the interior of the Bibi Khanum Mosque which is not quite in such a high state or restoration and preservation.  More like a renovator’s delight.  There are some tile fragments stacked on the floor at left and centre. 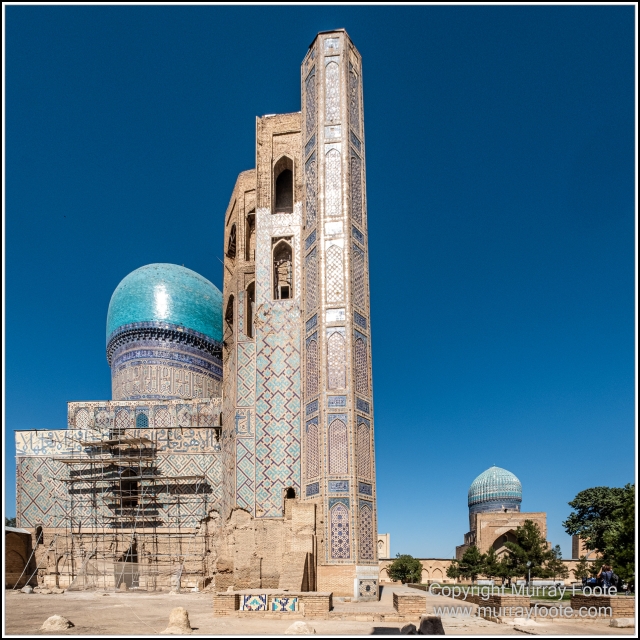 Here on the left is Bibi Khanum Mosque and its pishtak; one of the side mosques is in the background. 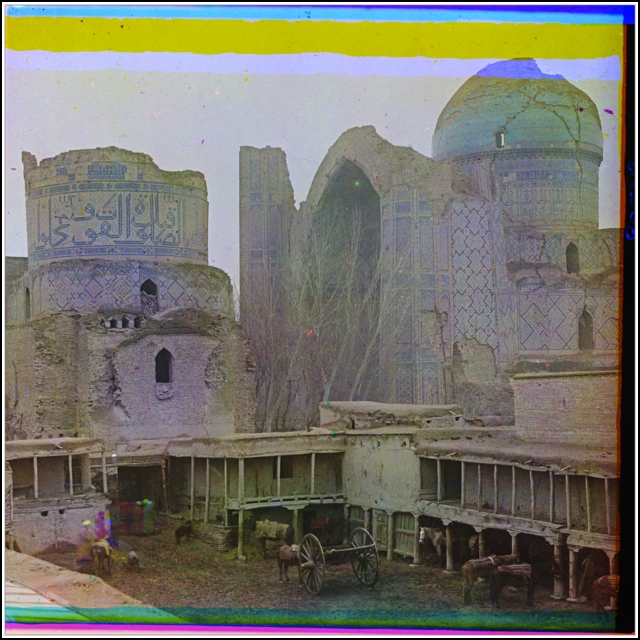 This is an image taken by Russian photographer Sergei Mikhailovich Prokudin-Gorskii in 1905, showing damage to Bibi Khanum Mosque, still unrepaired since the earthquake of 1897. This an early colour process, combining three images taken through red, blue and green filters, probably taken on glass plates.  This is why there are a few people in the foreground who have moved and appear as different coloured shapes.

The Soviets started the repair of the mosque but most was done by the independent Uzbek government since 1991.

I wasn’t going to include this image but the lone figure gives a good sense of scale. 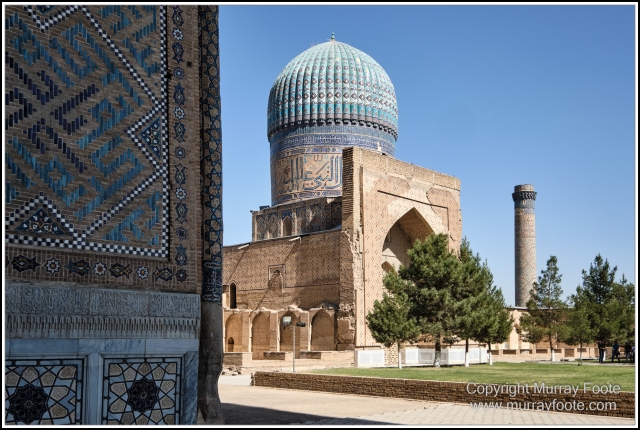 Here is a side mosque from the archway of the main mosque.  You can see a corner of the central open area, large enough to hold ten thousand people, and originally paved in marble.

Jools is photographing that same side mosque from the other side.  You can see here the extent of the enclosed spaces that lay between the open courtyard and the wall.