The last post was the last monochrome lighthouse post which also finishes a burst of fifteen monochrome posts on lighthouses and on Iceland.  So now I return to posting on my 2015 journey to Mauritius, Reunion, Madagascar, Falkland Islands, South Georgia Island and Atacama Desert.  For details and links of the whole journey, see the itinerary, which I shall update as I post.  This is the first post, of my first full day in Mauritius. 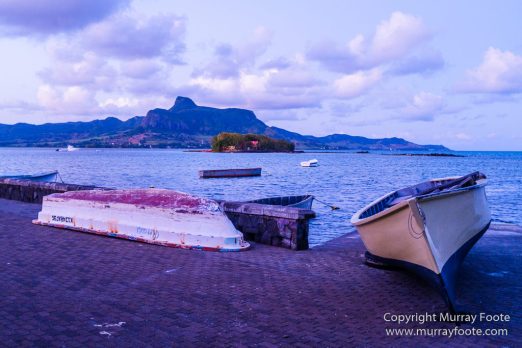 I had a long flight, from Canberra via Melbourne and a long stop on Kuala Lumpur, and arrived late in the afternoon at Mahebourg, the old capital, where I was staying.  This is down at the waterfront probably just after sunset.  There was a group of men nearby sitting round a table playing rummy. 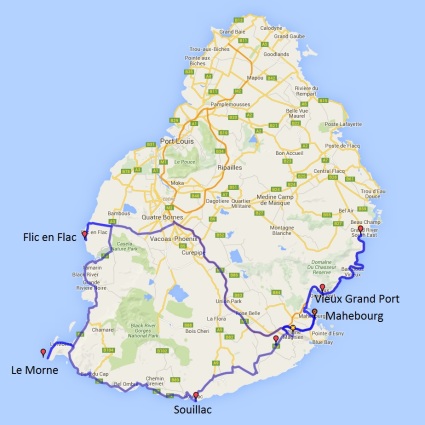 This is a map of my travels for the next day.  I went up the east coast but my way was blocked so I doubled back and drove along the south coast, then came back inland.

Soon after I left in the morning, this is the remains of Vieux Grande Port, the site of the original Dutch Fort from the first settlement on the island.  The ruined buildings we see though are actually French, from a later date. 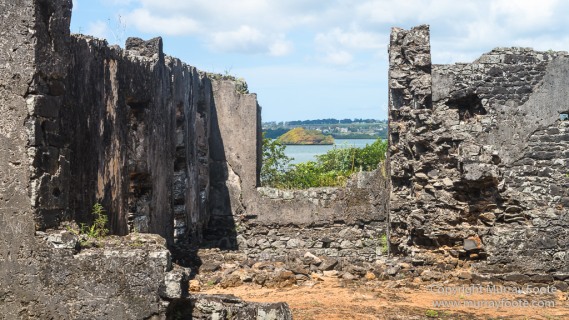 The original Dutch fort was built in 1638, a simple defence work surrounded by earthen walls and a pallisade.  It had to be rebuilt each year after the cyclone season.  The fort burned down several times, including in 1694 by maroons, or escaped slaves. 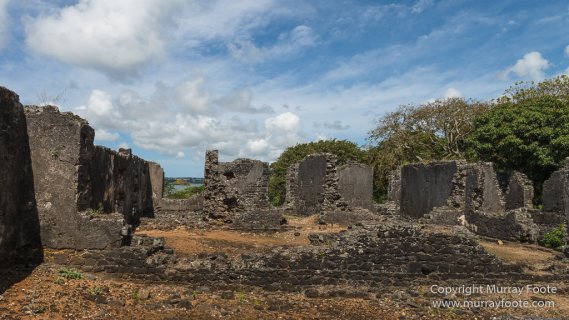 The remains of a Dutch lodge built by the commander Diodati in 1698 lie under the later French lodge.  The Dutch abandoned Mauritius in 1710 and burned down the fort before they sailed away. 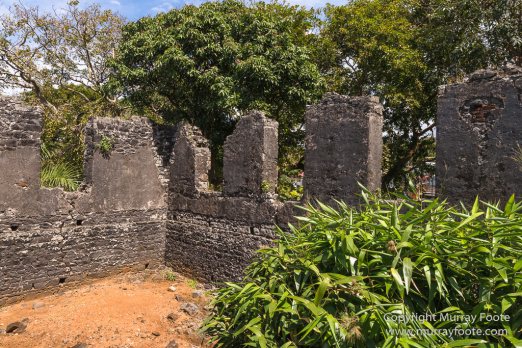 The French arrived five years later and named the island Isle de France.  The French buildings we see here were built between 1753 and the end of the eighteenth century.  The fort was abandoned in 1805 and much of the stone used in the construction of Mahebourg.

Explorer Matthew Flinders stopped off in Mauritius in 1803 as his ship needed repair but France and Britain were at war and he was interned.  In 1810 the French won a naval battle near here but the British successfully invaded three months later.  Flinders was influential in persuading the new administration to allow the inhabitants to retain French language and law.  Consequently, Mauritian Creole (derived mainly from French) is the main language and French is more widely spoken than English.  The British also conquered nearby Reunion in 1810 but in 1815 they gave back Reunion to the French while retaining Mauritius. 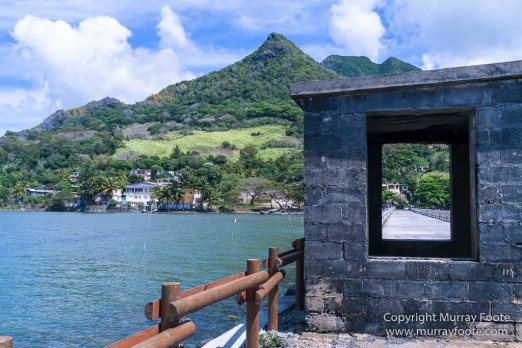 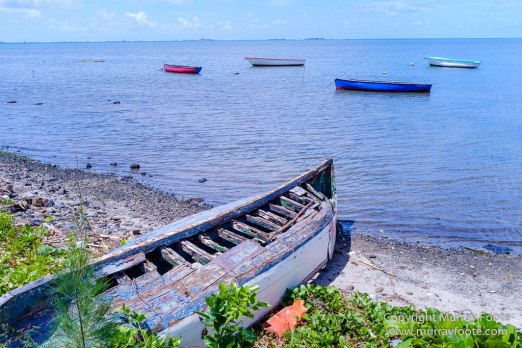 It was not possible to go for a sail in this boat as there was no-one around to ask. 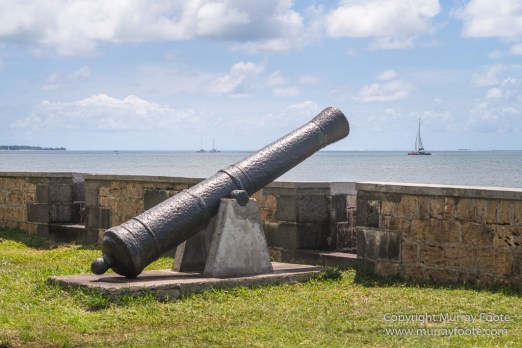 One of a couple of cannon at Pointe du Diable, part of a battery presumably dating from the Napoleonic Wars. 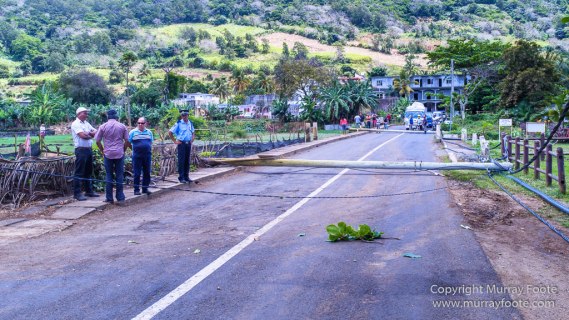 Driving up the east coast, this was as far as I got.  A power pole had fallen over the road.  No one was going to get through for some hours.  Already the traffic was backed up.  Where my car was there was no turning area off the paved road but I was driving a very small car and able to do a U-turn.  Not so easy for most of the others. 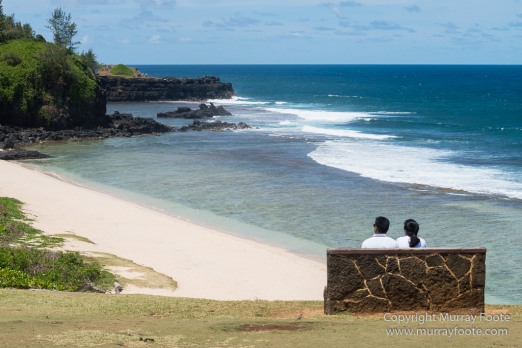 Much later, we are now on the south coast near Souillac. 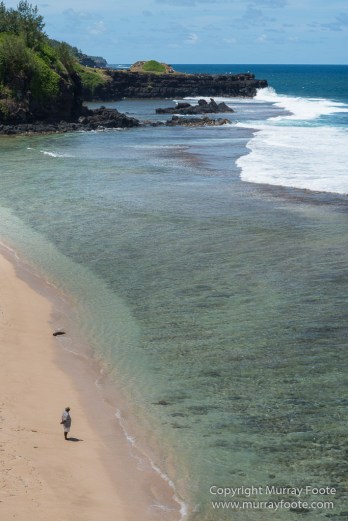 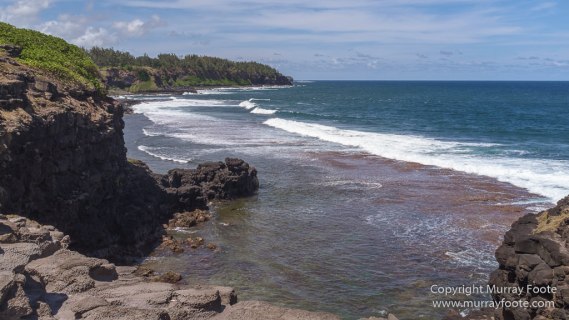 I also had an excellent lunch at a restaurant near here. 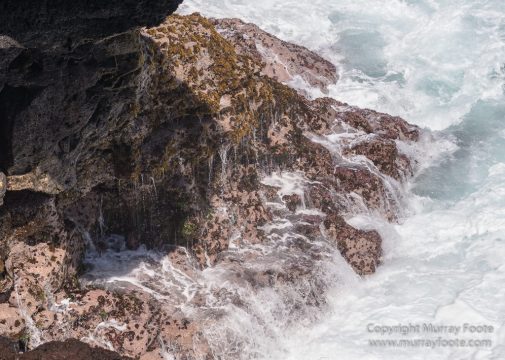 Also nearby is La Roche qui Pluere, where the water from the receding waves give the appearance of tears. 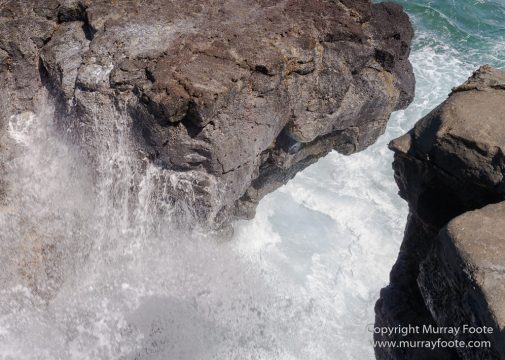 There is also a natural rock formation here, said to resemble the poet Robert Edward Hart, who spent his last years at Souillac.

This is a section of the south coast, somewhere not far before Le Morne. 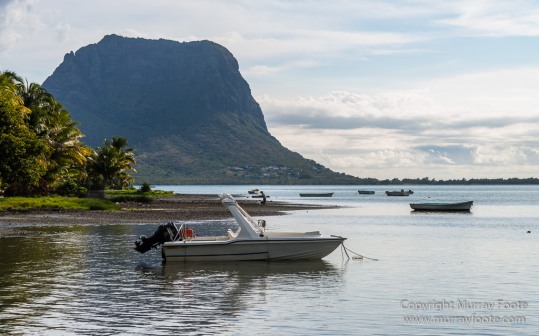 And in the distance we see the monolithic peninsula of Le Morne.  This was a haven for runaway slaves up to the early nineteenth century.  When slavery was abolished in 1835, a contingent of Police headed there to tell the slaves they were free.  However, their intention was misunderstood and many threw themselves over the cliffs to avoid being captured. 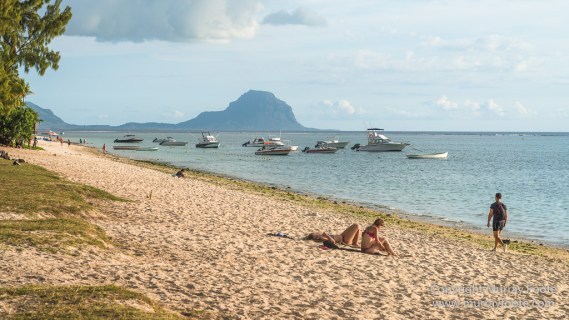 Considerably further north on the coast, this is the beach of Flic en Flac and le Morne is still visible in the distance. 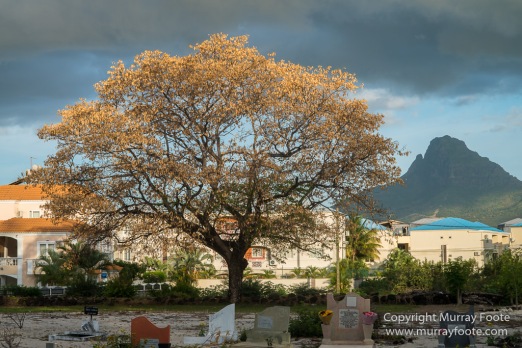 A tree in an old cemetery at Flic en Flac in the late afternoon light.  The cemetery was closed though, so I was unable to go in.