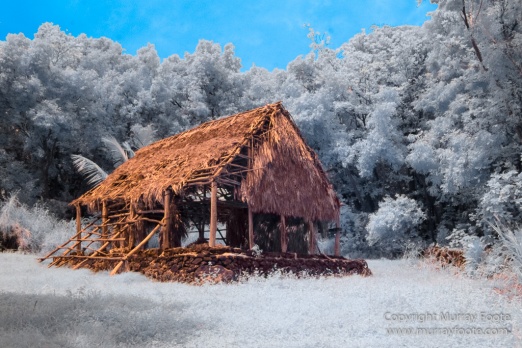 Later in the afternoon we visited the Kipahulu area of Haleakala National Park.  Haleakala is the huge mountain that comprises the southern part of Maui and this part of the National Park is not at the summit, rather on the flanks of the mountain on the southern coast, incorporating Waimoku Falls.

The image above is of a Hale Ku’au, a house for displaying, storing and trading.  The thatch stands out so much from the surrounding vegetation because this is an infrared image. Live plant material emits infrared light and the thatch is not living vegetation so it is quite a different colour to the trees behind. 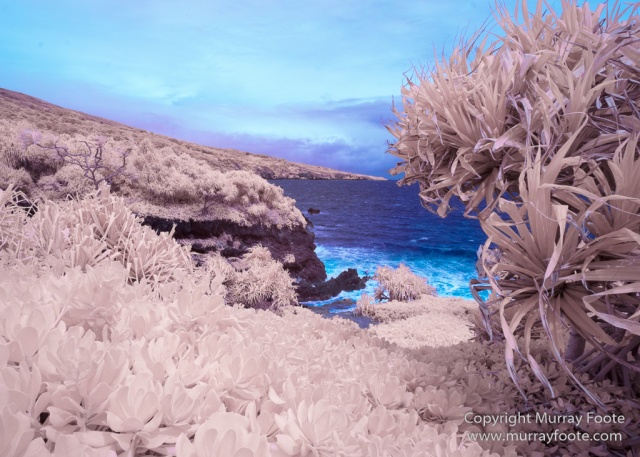 A glimpse of the coast.  The horizon is actually level; it’s just the sloping background that makes it appear otherwise. 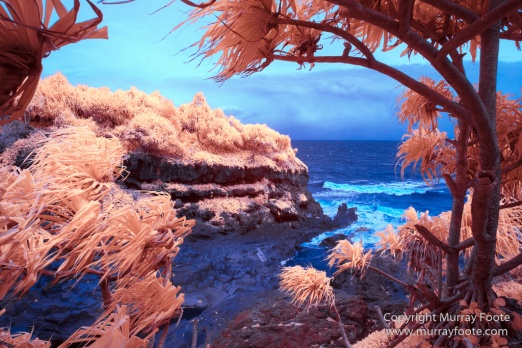 Other coastal views from a similar location. 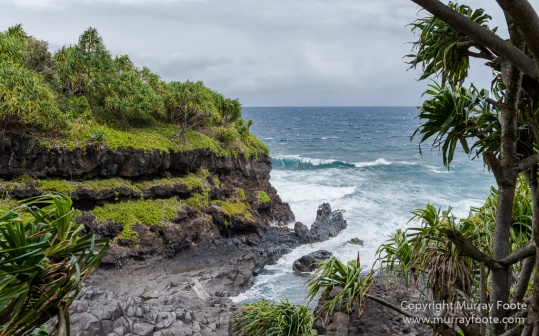 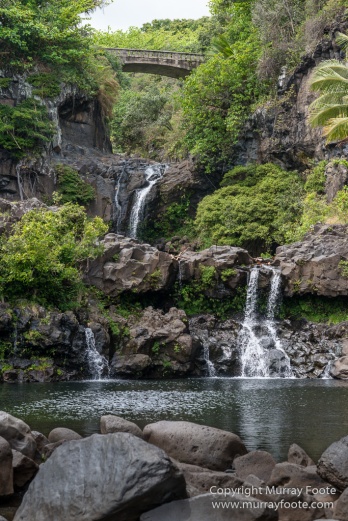 This image and the next one are at the Oheo Pools.  I carefully boulder-hopped up the river bed to get here. 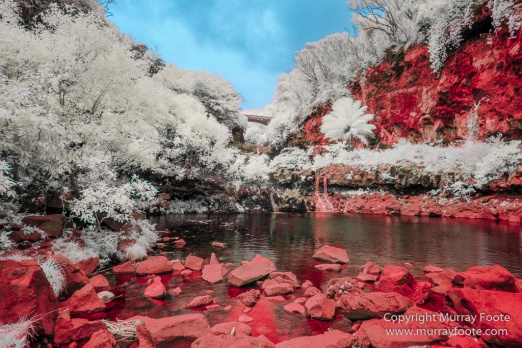 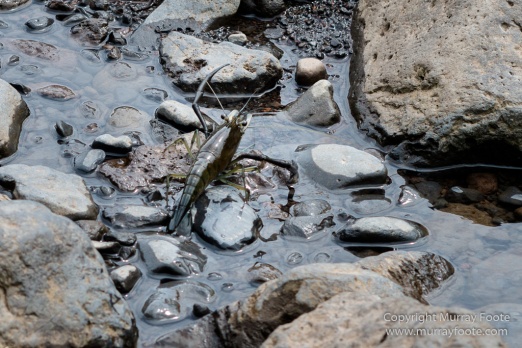 I came across this creature out in the open, moving from one body of water to another.  I thought it might perhaps be a crayfish and perhaps a rare native Hawaiian species.  It is in fact a Malaysian Prawn, a giant prawn inadvertently introduced.  They were being farmed in a creek and a flash flood swept them out to sea.  What the fish farmers had not considered was that they can swim in the sea so they spread and are now a pest. 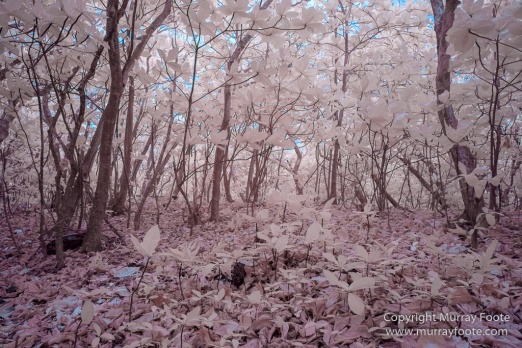 Back up above the Oheo Pools, here are some of the trees and undergrowth nearby. 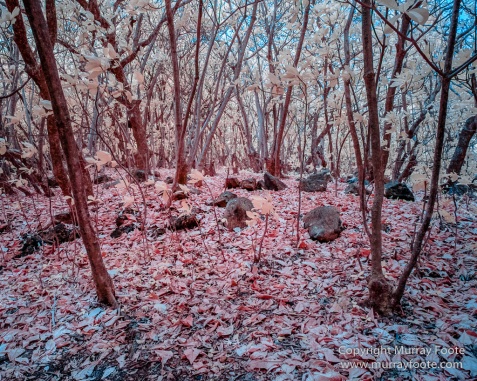 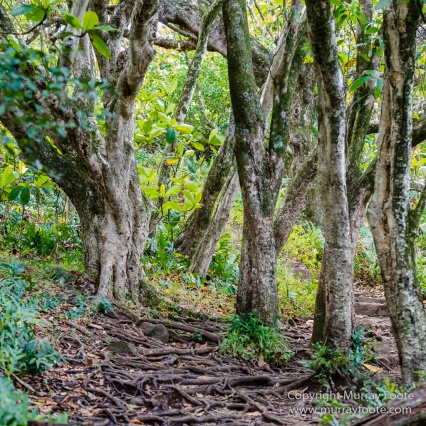 We went for a walk up towards Waimoku Falls, although rain was on its way, it was getting late and we did not expect to go all the way. 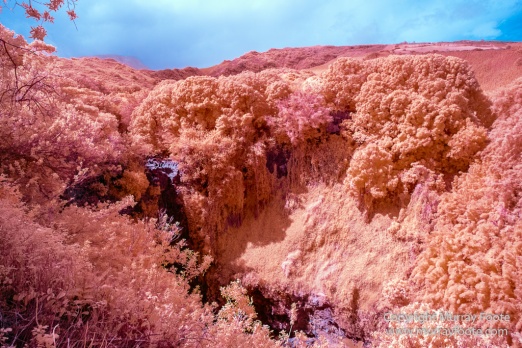 A view from the track.

Here is a shot of a massive Moreton Bay fig, stretching out a great distance with some almost horizontal branches.  It is a three-shot panorama using a 24mm tilt-shift lens, which should produce perfect registration.  Not entirely successful, though because the light was too bright, resulting in too much light and shadow.  This sort of shot works best under heavy cloud cover. 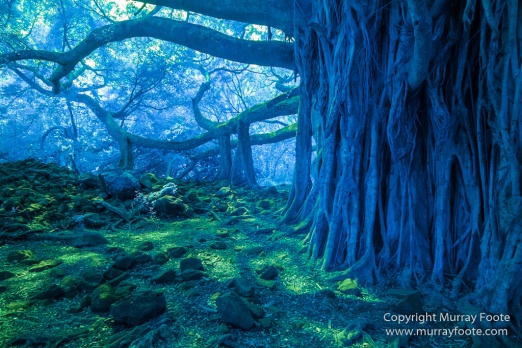 However, this infrared image of the same tree works just fine.  The highlights on the ground seem less of a problem in IR.

It almost looks like a set from Lord of the Rings.  One almost expects to see some Menehune sitting around.  Menehune were mythological small people who lived in forests.  This may refer to the original settlers from the Marquesas, displaced hundreds of years later by a new wave of settlers from Tahiti. 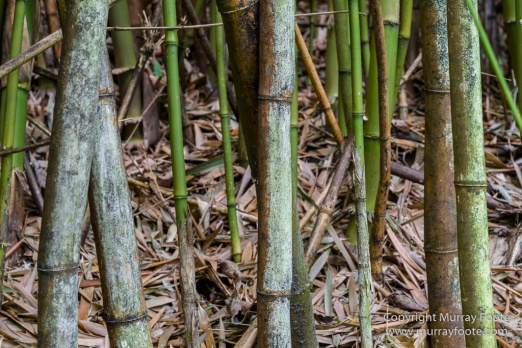 We went as far as the cane forest, though I must admit that did not impress me greatly.  A nice walk nonetheless, even if we did not get as far as the waterfall. 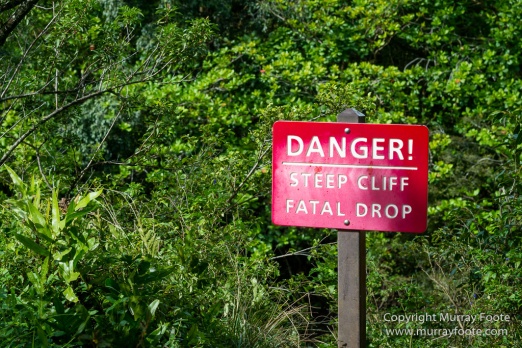 This is a sign one has to take some notice of.  People have fallen over the cliff, concealed perhaps by vegetation, and died.  A father and son also ignored signs and climbed down to the creek.  A flash flood swept them away and they drowned, as mother and daughter watched. 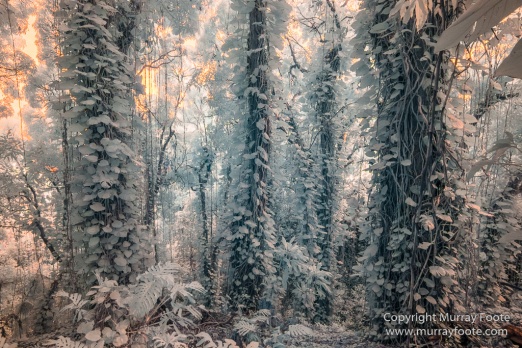 Perhaps this overgrown environment is suggestive of a cold forest with a forest fire behind. 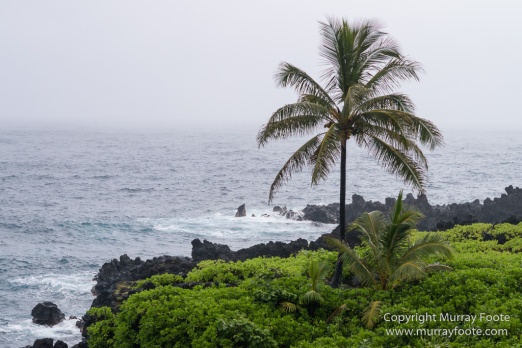 Out of the National Park now, we are at a black sand beach and the weather has closed in.  We will return here the next day.

The drive back to our accommodation was along the somewhat notorious Hana coastal road (on the eastern coast).  Curious little stretches of one lane road and blind corners with the prospect of having to back.  The south road is like that too, in parts.  It was also dark and raining but there was not much traffic.  Actually I found it rather fun.