On the long drive to Broken Hill, here I am waiting at a road works.  I’m waiting for the trucks and cars coming across the horizon from the right, along the stretch where the road is being rebuilt. 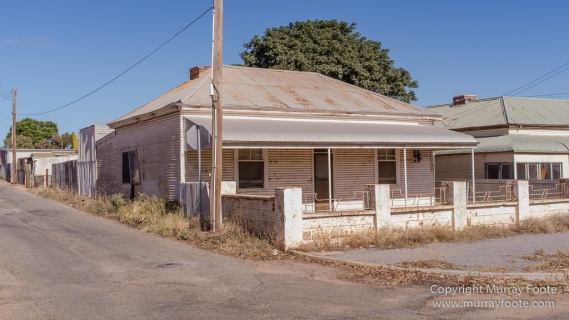 Broken Hill is a mining town, founded on massive deposits of silver, lead and zinc that originally came to the surface.  Although it is in New South Wales, it is closer to Adelaide than Sydney and keeps South Australian time.  In 1885 it gave birth to the massive Australian mining company BHP (Broken Hill Proprietary), now BHP-Billiton. 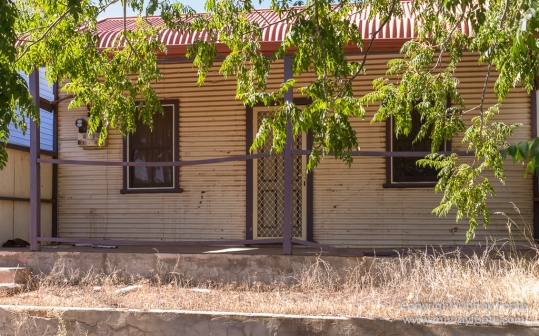 One of the intriguing aspects of Broken Hill is the old houses with walls of corrugated iron, dating back as early as the 1890s.  Corrugated iron is a common roofing material in Australia and New Zealand, but not for external walls.

There is no wood growing in appreciable quantities anywhere near Broken Hill though stone and brick may have been possible locally.  The original inhabitants of the cottages would have been BHP workers and I presume BHP corrugated iron, produced in Broken Hill, was available to BHP workers at discount rates.

Broken Hill is pretty much a desert environment and it gets pretty hot in summer.  Average temperature in January is 33.5ºC (92.3ºF) and maximum January temperature is 45.3ºC (114ºF).  So corrugated iron seems a strange choice, especially in the old days in the absence of air conditioning or evaporative cooling.  One hopes the houses were built with effective insulation but my guess would be that this was not originally the case.

There is a woman behind the fly screen door who asked “Can I help you?” to which I answered “I’m just taking photographs of the old houses”.   What she was really asking was “What are you doing hanging round in front of my house?  You’d better have a good explanation or I’ll call the cops”.

By and large they are humble worker’s cottage that just happen, somewhat curiously, to be built of corrugated iron.

Some aspire to be grander than that, which is fine, but somehow faintly comical and incongruous given the building materials. 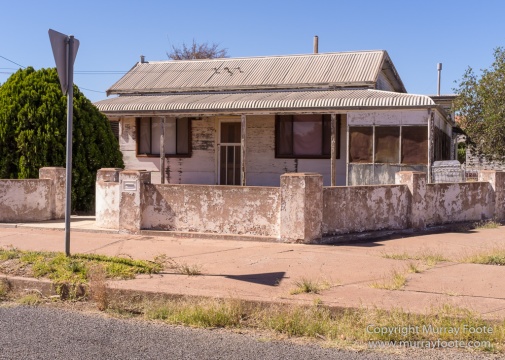 Others have no pretensions and are all the grander for it.

Most are neat and well kept.

This one seems to have something of a problem with the roof. 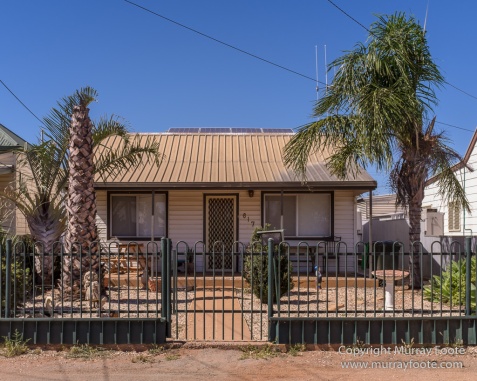 This one has elegant plantings of palm trees, one of which unfortunately seems to have died.

Clearly, someone of an artistic and creative temperament lives in this one.

This one appears very neat with a mainly paved front yard, faintly reminiscent in that to the house in Mon Oncle but probably not in anything else.

This is a brick shop on a corner with a plaster facade.  However, the sheds behind it are corrugated iron and so is the awning.  The sides of the awning and the posts are metal and so is the fascia at the top.  The sign at the top says “Microwave TV Video Repairs” but there is a much older sign under that including the word “Repairs”.  Evidentally it used to be a different kind of repair shop.  There were probably older signs under the traces we can see.

This store is clearly of corrugated iron construction although the fascia is probably wood. 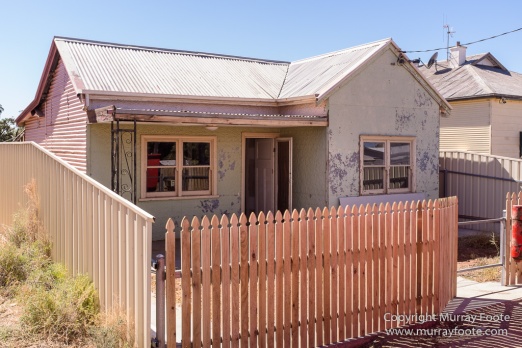 An old house with a new picket fence, as yet unpainted. 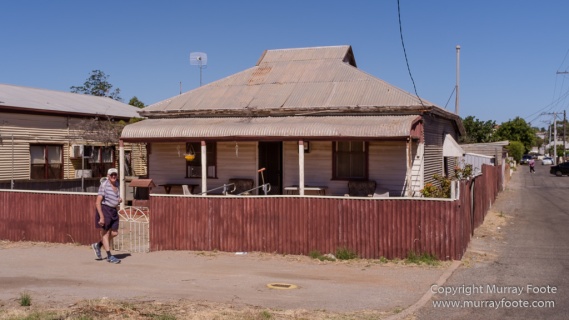 A pedestrian passes by an old corrugated iron house.

Here is a front view of that house, including a wooden fascia.