Some lovely dawn skies. Missed the best of them, caught by surprise while changing location. Saw lots of condors and cara cara but no photos worth showing. So far on the journey have also seen guanaco, rheas and a skunk.

This is the line of mountains including Mt Fitzroy, from an observation point just before El Chalten.

Further out of town and just after dawn. This is probably Co. Huemul.

Later in the morning we went for a day trip to Laguna de Desierto and the nearby tarn Laguna del Huemul. Very lovely forest, river, tarn and views. The road was rough in parts but not too bad really though the 2WD drivers would doubtless not agree.

Here we are at or close to the road, about halfway to Laguna del Desierto. We are looking along the Rio Electrico valley towards Co. Marconi Norte.

Following images are at or near Laguna del Huemul, which in turn is close to the start of Laguna del Desierto. The huemul, incidentally, is a very rare Patagonian deer which unsurprisingly we did not see. 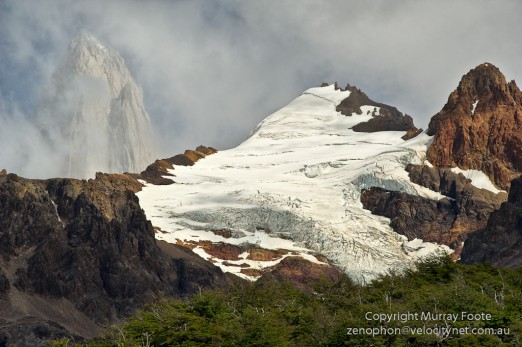 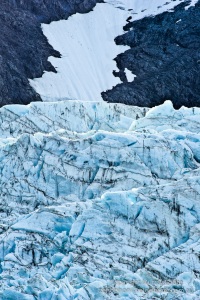 The glacier at Laguna Huemul

Tree with Mt Fitzroy in background from near Laguna Huemul

Mt Fitzroy from near Laguna Huemul

Dinners at hotels and restaurants in Argentina have been usually wonderful but often time-consuming. So when we returned, we thought we would save time by having a pizza in town and went to a place with the strange sign outside “Free pizza – all you can eat” (maybe that’s when you purchase alcohol). Rather than saving time, the pizza took an hour and a half to arrive and was then quite forgettable. We were not impressed.