Close by La Brea Tar Pits, we next visited the Pavillion for Japanese Art at the Los Angeles County Museum of Art (ACMNA).

Haniwa are terracotta clay figures buried with the dead as funerary objects.  They are from the Kofun period of 3rd to 6th century AD, when horses were first domesticated in Japan and this would have been from the grave of an important person, probably in Southern Honshu.

Chest of drawers from the 18th century.  Lacquer over wood with gold and silver flakes.

It is decorated with several views around Lake Biwa and was made for the lord of Hikone Castle.

Due to a close association of Shinto with the Imperial Court, such figures were shown in court robes as real people and were kept in close shrines, not viewable by devotees. 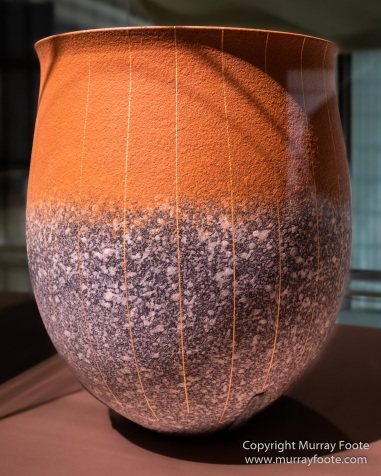 (No description.  I didn’t photograph the label).

Daruma was the semi-legendary Zen Master who brought Zen from China to Japan in the early 6th century.  Torei Enji was himself an eminent Zen Master who wrote a description of Zen practice, still read today, entitled “The undying Lamp of Zen”.

Kanzan and Jittoku were enlightened people who lived on Cold Mountain (Hanshan) in China in about the 9th century and they are symbolically represented in this drawing.  Here is a poem by Kanzan (or Hanshan to the Chinese):

Men ask the way through the clouds,

High summits are of naked rock.

Behind you green peaks, and in front,

To east the white clouds, and to west –

Want to know where the cloud way lies?

It’s there, in the centre of the Void!

(No description.  I didn’t photograph the label).

This is the first of the netsuke.  Three others follow.  They are unique to Japan and because kimono had no pockets.  Instead, the Japanese used inro or segmented hanging boxes.  They were on a cord which went through the netsuke and attached to the obi or kimono sash.  The netsuke prevented the inro and cord slipping out from beneath the obi.

They needed to be light and small yet strong and support a hole through them so they are masterpieces of miniature design. 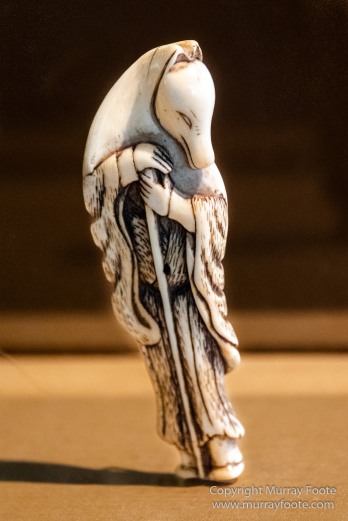 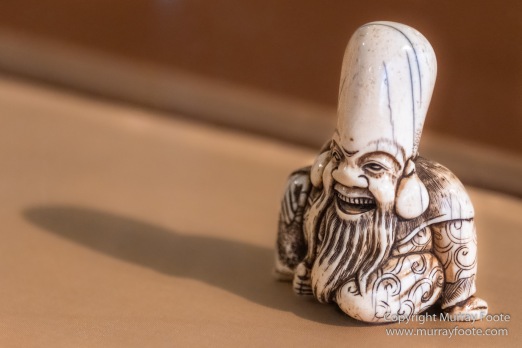