Clickimin Broch is now surrounded by a suburb of Lerwick, the main town of Shetland, as you can see in this image, taken from a road at the side.

This is the path in.  Originally there was an island and around the 6th or 7th century BC, a small family farm with a fence to enclose the cattle and sheep.  There was a large circular farm house from around the 5th century BC.  In the 4th or early 3rd century BC, the wall was enlarged as a defensive wall and a blockhouse was built

I presume the feature parallel to the path is the original stone causeway and entrance path.

The stones in front may be the remains of a small wall and gate at the end of the causeway, though with most of the stone removed over time.

This is the entrance way through the outer wall.

Just beyond the main entrance way, this is the blockhouse, originally much higher than now.  The broch is behind but hidden by perspective.  We will later see this blockhouse from the other side.

Rather than continuing straight through to the broch, I first walked around between the broch and the outerwalls.  There are the remains of many dwellings here. 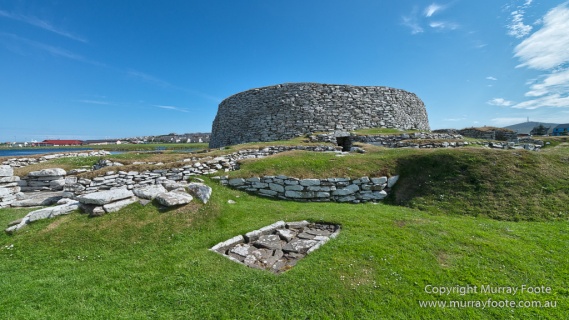 Looking back towards the broch.  I think that is probably a hearth in the foreground.

The entrance of the broch, from the inside looking out.

Looking down on some of the steps within the broch, perhaps the steps from the ground floor to the first level.  Not available for traverse in any case.

A view from the top.  We can see remains of prehistoric houses, the outer wall, the lake and the town beyond.

The broch was built around 100AD.  It was originally 12 to 15 metres high (much higher than it is now).  In the second and third centuries AD the need for such fortifications reduced and a wheelhouse was constructed inside the broch.

Sometime between 500AD and the arrival of the Vikings in 800AD, the broch and surrounding dwellings were abandoned. 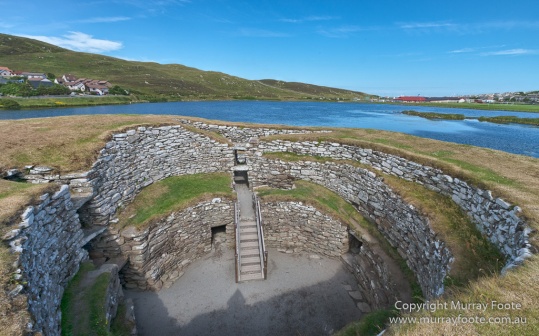 The stairway in the centre of the broch here is not an original feature but the stairs inside the walls are not open for use.

This is the back of the blockhouse, as seen from the top of the broch.

A couple walk past the remains of old dwellings. 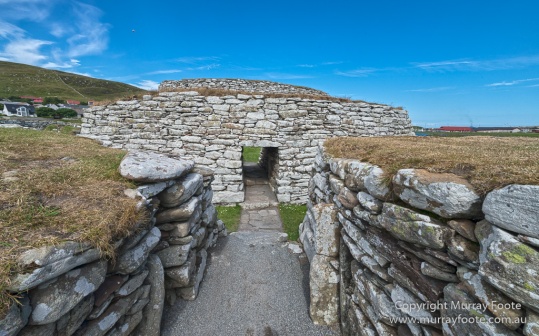 Walking out through the blockhouse.

A final view from the road, looking back.