On Thursday 21st April, our first full day in Easter Island, we got up at dawn to photograph the Tahai Complex.  This is just on the edge of Hanga Roa, the only town in the island, and shows many of the elements that made up a Rapanui village hundreds of years ago. 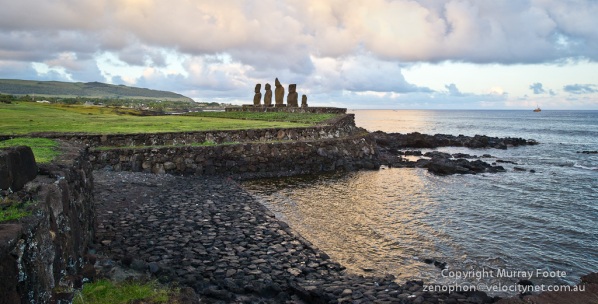 In the front above, you can see a sizeable stone boat ramp.  Fishing would have been an important activity as long as there was enough wood to make and maintain canoes.  Behind the boat ramp is Ahu Vai Uri with five somewhat eroded moai.  In the cove behind that, you can make out some of the buildings of Hanga Roa.  Out to sea is a small freighter.  Ships are the main source of outside supplies for the island, though there is no dock for them.

This is a hare moa, or chicken house.  The story is that the entrances could be blocked up at night and someone from another tribe trying to steal chickens would make too much noise to get away with it.

However, it may not be so simple and it seems they may have earlier been called tupa.  Germans excavated some in 1882 and were told by islanders that they were burial chambers for ariki (chiefs).  They had two doors so if bad spirits came in one door, the spirits of the ancestors could escape out the other.  After the period when the moai were toppled, ariki were buried under or near the ahu and the tupa became hare moa (or chicken houses).

Another theory is they may have been used to store plants (crops such as kumara, (sweet potatoes) perhaps?) so it is not certain how the Rapanui used these structures.

Note that the image above was taken with an ultra-wide lens and has perspective distortion which I have been only partially able to correct.  It is actually rectangular. 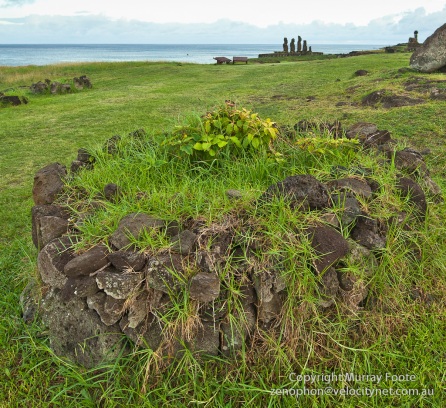 This is a small manavai, a stone enclosure for plants that protected against high winds and salt spray.  they were used in conjunction with lithic mulch, or using stones for mulch.

They may represent an adaption to more exposed cultivation conditions following deforestation and erosion.  Larger manavai could be up to 1.5 metres high and 10 meters in diameter. 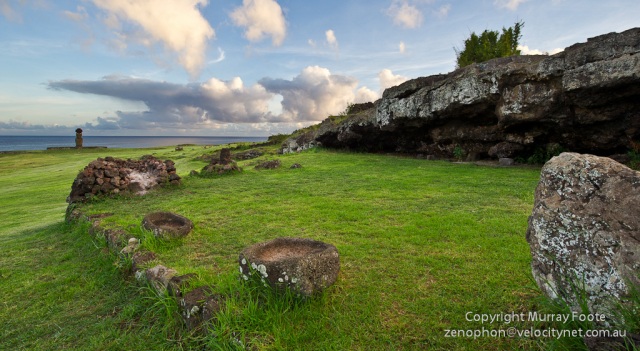 I think this has to be an umu (or oven).  There appears to be a fireplace at centre left and in front of that a couple of large grinding bowls.  The area under the nearby overhang allow for cultivation of plants, as you may be able to see if you look closely. 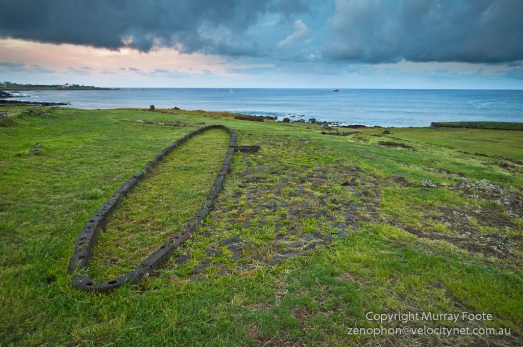 This is an image from dawn the next day, when we also went to the Tahai Complex.  It shows a Hari Paenga, a house for an ariki.  The oval stone foundations have holes where the Rapanui inserted curved wooden poles as the basis for a thatched roof.  They have a single low door opening out to a crescent-shaped stone courtyard.  There are 3,000 such foundations around the island and some could sleep many people.  The largest is 40 metres long.

Here is an image that shows more of the context of the Tahai Complex.  At the front is the same hare paenga that we saw above.  To the right is a corner of the hare moa we discussed above.  The along the sea coast from left to right, we can see Ahu Vai Uri (with the five moai and probably space for more), the boat ramp, Ahu Tahai with a single smallish moai and behind that, Ahu Ko Te Riku with another lone moai.  We can also see that the door of the hare paenga opens directly towards the moai Ko Te Riku. 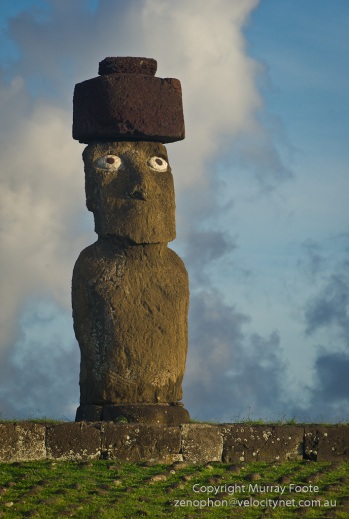 This is the moai Ko Te Riku, the  only moai in the island restored with eyes.  Originally, most or all of the moai had eyes but they were likely destroyed when the moai were overturned because the eyes would have been a prime source of the mana (prestige, power) of the moai.  Only one eye has ever been found and that is in the island’s museum, which is located not far from this moai.

There are many mysteries on Easter Island but who built the moai and the other constructions and what was their basic level of technology are not among them.  Easter Island was isolated for a long time and developed in a unique way but there are equivalents to the ahu throughout Polynesia and there are also stone sculptures in the Society Islands and the Marquesas.  No other cultures are likely to have had significant input and no aliens from outer space ever landed on Easter Island unless perhaps you count Erik Von Daniken.

However, that’s not to say Easter Island was completely isolated.  It is likely there were occasional voyages to other Polynesian islands, especially in the earlier period.  Also, the Rapanui do not appear to have possessed the kumara (sweet potato) when they arrived but acquired it later, probably between about 800AD and 1000AD.  This originated in South America and spread right across the Pacific, including to New Zealand and even New Guinea.  Since the Polynesians were very capable navigators with their ocean-going catamarans whereas the South Americans had reed rafts which would eventually sink, it may well be that a Polynesian voyage made it to South America and brought the kumara back.