In the distance is St Ninian’s Isle.  I originally hoped to stay in one of those houses overnight and perhaps get some dawn shots, but a room was not available.

The island you can see on the horizon is Fair Isle, halfway between Shetland and Orkney.

(While if you click on any image in this Blog you will see a larger one,  in some cases I have been able to offer a huge image you can scroll around in.  However, I can no longer create such images because Microsoft has killed its free Zoom.it service and I’m not aware of any easy alternatives.  This also means 64 such images in this Blog will become unavailable in their expanded form on 15th September, in about a week).

The island is connected by a sand causeway or tombolo.  The remains of a 12th century chapel are just to the right of the end of the tombolo.  Older ruins lie beneath.  The island may have been used as a domestic residence from the first century BC and as a Pictish burial ground from the third century AD.  There are Christian burials there in a graveyard that was used up till the nineteenth century as well as earlier Pictish burials from prior to the arrival of Christianity.

Excavation in the 1958 revealed a wooden box containing a cache of twenty-eight silver objects from the 8th century, the “treasure” of St Ninians.  This included bowls, weaponry and jewellery and is thought to be personal items rather than ecclesiastical.

From the view in the previous image I am now looking to the right.   The strip cultivation suggests continuation of ancient forms of land tenure.

Here we look from that tiny village back towards the island and the tombolo.

If you click on the image for a larger view, you can make out a few people walking along the tombolo, which is 500 metres long. 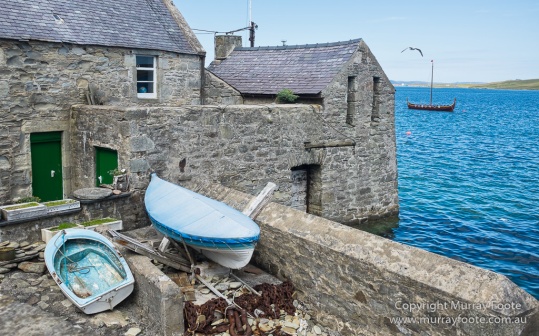 From St Ninian’s Isle I went to Lerwick, the main town in Shetland.  This is The Lodberrie, the best preserved of a series of Lodberries that used to front the Lerwick shoreline.  Dating from the eighteenth century, they were merchant houses and docks for loading and unloading produce from ships.  Hence the two boats in the foreground are on a stone sea ramp and the door behind opens onto the sea.  The globe in the window is in context with the historical significance of the building and in the background there is a seabird in flight and a Viking galley.  You can pay to go for a row in that galley if you’re there at the right time.