I flew from Orkney to Shetland in the late afternoon, picked up a rental car and headed off to my accommodation for the night.  After finding a place for a bite to eat, I headed for Sandwick for a night-time voyage to Mousa Broch.  The purpose of this trip for most people was to observe the storm petrels returning to the broch.  For myself, it was mainly to photograph the broch by moonlight as it was just past a full moon that night.

All of these photographs were taken in darkness and this was a 15 second exposure.  The sun had set at 10pm and the boat left at 11pm.  These images were taken in the two hours after that.  The main light source is moonlight and it is so far north that there is still some residual light after dark in summer (“the simmer dim”).

There are no people in this image.  We had stopped for a talk and I took advantage of that to make an exposure before the people arrived.

Moonlight is actually the same colour as daylight though we see it differently because in very low light we use our rods rather than our cones.  Exposures range from ½ second to fifteen seconds.  I could have processed these images to look as bright as full daylight but that is not how it was.

A little bit later, there are now people around the broch.

Mousa Broch is the largest and most complete broch of them all, around 2,000 years old, and still stands to a height of 13 metres.  It is thought that this is close to the original height.

There is an account of this broch in the Orkneyinga Saga.  Erlend the Young had requested marriage to Earl Harald Maddadarson’s mother Margaret and been refused so he kidnapped her and they eloped from Orkney to Mousa Broch in Shetland.  Harald pursued them and beseiged the broch but found it impossible to attack and it was evidently well enough provisioned to withstand the seige.  Erlend then persuaded Harald to accept the marriage in exchange for his support, which Harald might come to need in likely conflicts with the other two Earls, so they reconciled and sailed off together.  This would have been in 1156 so the broch would have probably been over a thousand years old at the time. 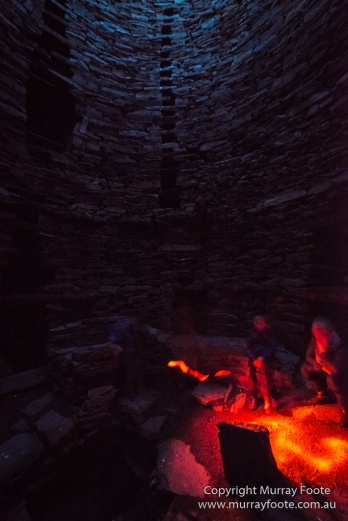 The inside is now an empty shell but there were originally five floors.  The light at the top is the moonlight seeping in; the light at the bottom is torchlight.  We were instructed to use red beams, less disturbing I think for the petrels.

The base of the broch is solid, from four metres up there are two walls with a circular staircase between them.  There is a steel grid covering the top of the broch so no children fall in from the top.  What you see in the sky is the moon, not the sun.

Here people are using their torches to try to detect the petrels as they return to their nests. 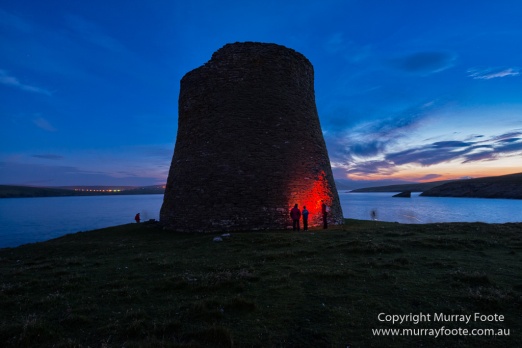 The petrels are small and very fast.  They have been out fishing by day and return under cover of darkness to the chicks in their nests so they can evade predators.  The nests are in the cracks between the stones of the drystone walls of the broch.

There are moving people on the right and at the left a still person casting a light on the broch.  Here there is also the shadow of a bird on the broch.  You won’t be able to see it even if you click for a larger web image so I’ll show you a blow-up section.

The shadow is easy to see; it’s diagonal with one wing dipping into the red patch of the torchlight.  The bird is visible too.  You can see one wing better than the other though it’s clearer if you click on the image for a larger view.  It’s about halfway between the torch and the shadow and there is a white flash from its tail feathers.

It took me a while to work out what has happened here.  It’s a long exposure so the figures of the other people are blurred.  The birds are very fast but here is one and its shadow in focus.  The person by the broch must be holding a camera as well as a torch.  The torch is the red light.  The white light is the flash which just happened to go off during my exposure.