Early in the morning, as determined by opening hours, I visited the Broch of Gurness, not far from where I was staying.  The image is level, the broch is just built on sloping ground. 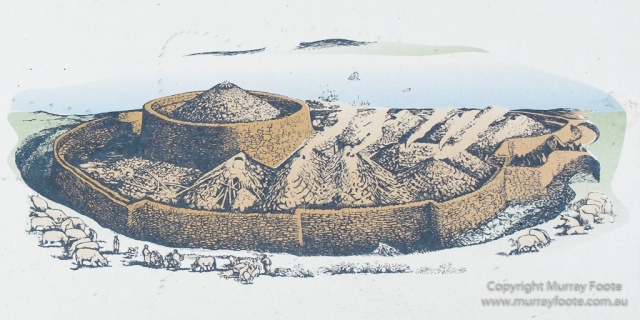 This is what it would have looked like two thousand years ago, from the information board at the site.  Brochs are always circular stone towers.  This differs from most others, especially those on the mainland, in that it was surrounded by a fortified village.

Here we can see the remaining lower part of the external wall.  In 1929, before excavation, there was just a large grass-covered mound here though there was rumoured to be a broch underneath. 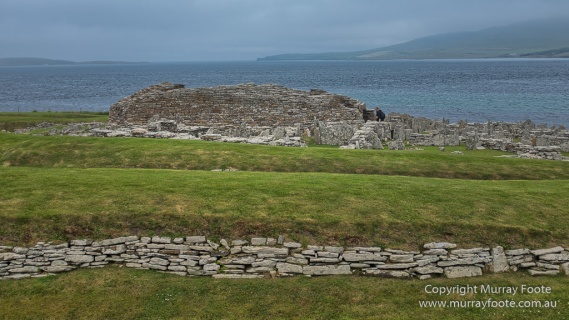 The sea was the highway of ancient times.  The broch is on the edge of Eynhallow Sound, between Mainland and Rousay.  I think the land in the distance on the left must be the small island of Eynhallow.

Coming in a bit closer, we can start to see the remains of the village that surrounded the broch.

There was a small fortified settlement here in 400BC, but the main period for the broch was between 200BC and 0AD.  From 200AD to 600AD, the community had gone and there was just a single family farmhouse on the site.  Perhaps the threat of attack and the need for fortification had diminished.  A Viking grave from around 850AD was discovered near here but by that time the site was deserted.

This is the “Shamrock House”, a later Pictish dwelling with small radiating rooms.  Originally one of the dwellings adjoining the broch, it was painstakingly moved to near the Visitors’ Centre to allow excavating structures underneath.

And this is what it may have looked like when in use, including a low thatched roof.

The remains of a dwelling adjoining the broch, though I am unable to describe what we are seeing with any precision.  Perhaps the light brown stone square is a hearth.  Perhaps the recessed box beside it is a well, though the guidebook does not mention it.  There is a well within the broch, with steps down to water, but this is not usually open to the public.

The path into the broch.

This is what it may once have looked like. 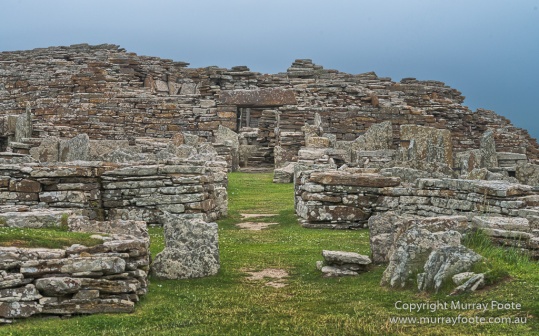 Past the houses to the door to the broch itself.

Because it is surrounded by a fortified village, the door to the broch is taller than doors to brochs that stand alone.  They usually require that a person stoops as they enter. 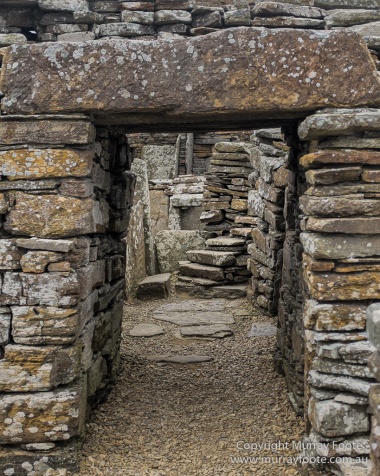 This is the interior of the broch.  Much of what we see dates from a later period.  There originally would have been a wooden ceiling above here for an upper floor, and a thatched roof above that.  The wall would have extended much higher.

The rectangular corner on the very front left is part of the hearth.  I would presume the trees were long gone and they had to burn peat or turf, maybe cattle dung as in India today.  The rectangular hole in the ground behind it is the well.  There are steps going down but access is closed.

A trough for cattle and sheep, perhaps?

Elegant stonework on the interior of the broch wall.

2 comments on “Broch of Gurness”