I may make very few posts during the next six weeks or so.

My main data drive was a RAID 5 array with four 1TB drives.  This means that three of those drives were for storage, with “striping” or writing across drives for speed, and the remaining drive was for backup.  My backup system is a Drobo S, with five 3TB drives, functioning similarly to RAID 5.   I had a lot of spare space there so when the drive failed it just rebuilt to the remaining four drives but that made it unusably slow for backing up for several days in the meanwhile.

Then, when one of the drives in the RAID 5 data drive failed,  I managed to backup Antarctica, Japan and New York and just two TIFF files from the North Atlantic trip before it died completely.   This was good because I had no backup of the images I restored and for the travel files I didn’t manage to restore, I still had all the RAW files on the laptop.

I now have all backups restored.  I lost about 250 TIFF files from the North Atlantic trip where I worked in Photoshop CC, Vivesa, Silver Efex Pro, SNS HDR or AutoPano Pro.  Those I can always regenerate from the RAW files though.  However, it appears I failed to create a backup for Blues Festivals in 2011 and 2012 and I have lost all those images, about 7,000 in all.  The best 1,000 or so are published to the web on JAlbum (in reduced size) but losing the source files is unfortunate and there’s no redress. 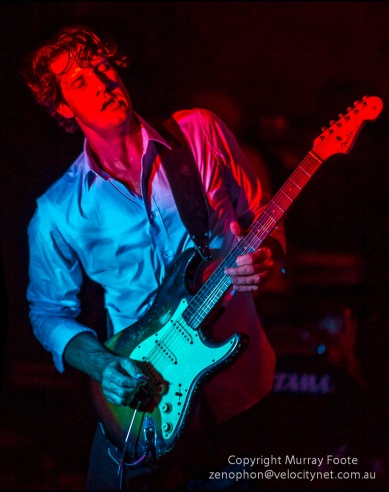 The original file for this image is now lost. This is Darren Jack at Thredbo Blues Festival 2012.

The conventional wisdom is that you should have three copies of your data, including one in a remote location in case say your house burns down.  I thought I could get away with two because they were both in systems that can usually cope with drive failures.  I almost did get away with that but then the main problem was that I was missing a backup.

I have rebuilt the data drive with four new 2TB drives as a RAID 10 array.  This means that two of those drives store data while the other two are backups (mirroring the data).  The drives are also “striped”, writing between each other for speed.  That can cope with losing up to two drives, provided they are not both drives of a mirrored pair.

I have many spare internal drives and a “disk caddy” to access them.  So I will create a second set of backups on those drives.  Finally, I will backup selected images to the Cloud.  These will probably be those with three stars or more in Lightroom, only essential images to minimise expense.

It’s also important to have a backup of your computer’s image, i.e. your C Drive including all the hidden system files.  You can use that to restore all your functionality and programs if you get a virus or your C Drive crashes and even (with a higher version of Acronis) to a different disk that replaces your C Drive.  This didn’t come to play in this situation but has a couple of times in the past.  I have saved images from both Acronis and Windows.  There’s a link here that shows you how to do it on Windows 8 which also has the benefit that Windows will use this image if you elect to Refresh PC.  Otherwise refreshing the PC just wipes everything.

I lost ten days with all of that.  I had about ten posts prepared in advance but not any more.  I’ve started preparing posts on St Kilda where I took about 400 images and another 420 sailing around the islands.  This will take a while and there’s also a lot to say.  Then this coming weekend I’m off to cover the Thredbo Blues Festival and it will take me at least two weeks to process the images I take there.  After that I’m in India for most of February (more on that soon).  I may not get much opportunity to post from there.  There may be very few posts between now and early March.