The small village of Stein on the Vaternish Peninsula. 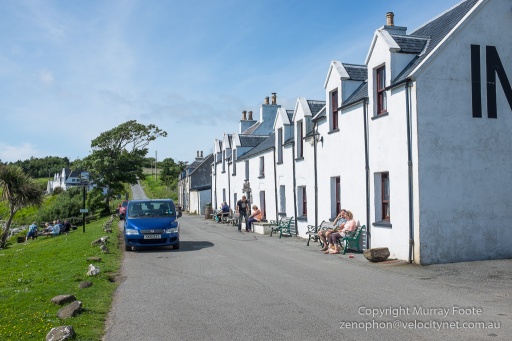 Cottage at Lusta, above Stein

A currently occupied thatched stone cottage at Lusta, near Stein.

Ardmore Bay.  Site of the massacre of the MacDonalds in 1578.

In 1577, the MacLeod clan had massacred 395 MacDonalds, trapped in St Francis Cave in Eigg.  The next year, a couple of galleys of MacDonalds landed at Ardmore Bay and surrounded this church, full of MacLeods, who all burned except one girl who escaped.  She raised the alarm at Dunvegan Castle and a party of MacLeods sallied forth.  The MacDonalds found their galleys had been stranded by the fallen tide.  They were all caught and massacred.

A very old gravestone behind the fence at Trumpan Church.

Rachel Chiesley or Lady Grange was buried in this church though her grave was never marked and there was another funeral in a different church as a smokescreen.  She was kidnapped on orders from her husband, a leading Scottish Aristocrat and held in captivity, mainly on the remote island of St Kilda, for thirteen years.  More on this when I post on St Kilda.

The large stone in front is the Trial Stone, used in mediæval justice.  There is a hole in the rock, I think the one at middle top.  An accused person was blindfolded near the rock and then set free.  If they were able to immediately put their arm through the hole they were innocent, otherwise guilty.