Central Park is a huge space in the middle of Manhattan, occupying 3.4 square kilometres or 840 acres.  We had already passed it through several times, usually on the way to and from the Met (Metropolitan Museum of Art).  It contains many pathways, several large artificial lakes and many quite different environments. 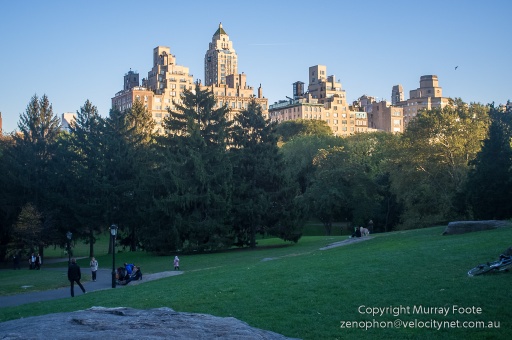 Elegant multi-storeyed apartment buildings line both sides of the park on the west and east.  This is in the late afternoon and looks towards the east.  On the other side of the park, we often came out near the apartment block outside which John Lennon was gunned down thirty years ago. 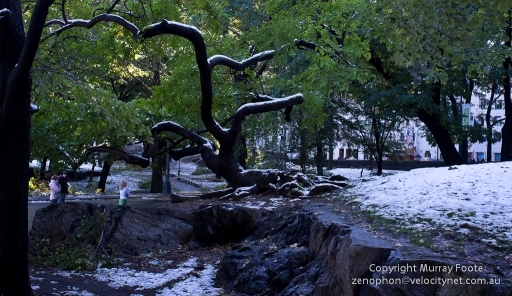 On the 30th of October, though, we came to the park to see it in snow after the heavy falls of the previous day.

Central Park opened in 1857, after the eviction of about 1,600 poor residents who had been living there in several villages.  The roads and lakes were laid out according to the winning design of an 1858 competition.  In the early 1930s a “Hooverville” developed here, a shantytown of people dispossessed by the Great Depression, until they were evicted in 1934.  In the 1970s and 1980s, Central Park developed a reputation of a dangerous place to go especially after dark but this is no longer the case following the crackdown on crime in the 1990s.

Usually when there is heavy snow here, it is winter and the trees have lost their leaves.  Since it was still autumn and the leaves had not fallen, much more snow was trapped in the branches than would usually be the case.

This lead to numerous cases of large branches falling down, as we see here.  Many parts of the park were roped off and closed for safety reasons.

Paddling on the lake didn’t seem to be a popular choice, notwithstanding the bright sunny day.  Possibly the fact that the canoes were locked up and fenced off may have been a factor.

Activity on the boulevards was returning to normal.  I suspect there wouldn’t have been many people running past the previous day. 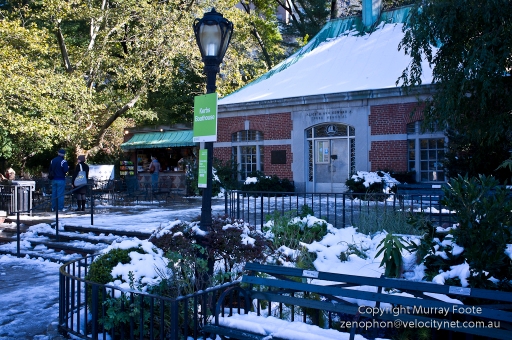 This is the Kerbs Memorial Boathouse, which apparently contains an impressive collection of model ships but was closed at this time. 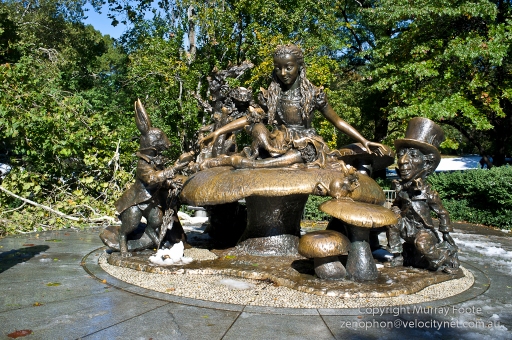 Just behind it, a bronze Alice, absorbing the afternoon sun, had already managed to shake off most of the snow.

Tai Chi in the background. 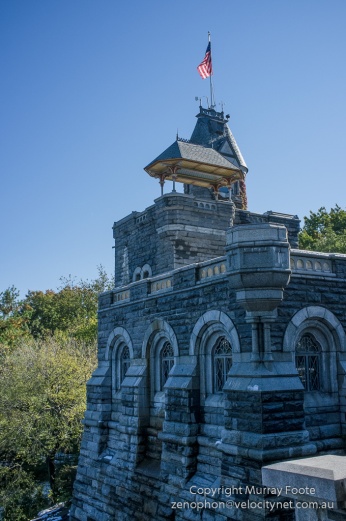 This is Belvedere Castle, a Victorian folly built in 1868.

And here is a view from the “castle”, looking over Turtle Pond approximately to the east, with the Met hidden behind the trees.

And by way of contrast, we encountered this strange sight in one of the streets on the eastern side of the park.  Halloween was approaching.