In the changeover from one trip to another, here are some local images from the last year.

There are two groups of images. The first is from a Nikon-sponsored event on Black Mountain Peninsular, late one afternoon. 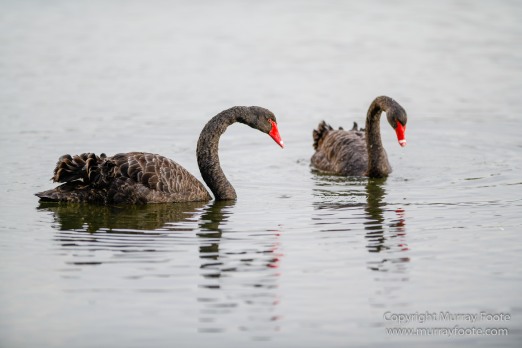 No prizes for identifying these birds.  They were cited in the second century AD by Roman poet Juvenal as an example of something that could not exist.  They were originally believed to be a hoax when reported back in Europe by the Dutch in 1697.

After a while, I mainly focused on semi-abstract details.

There was a prize of a canvas print for best image of the afternoon.  I won that with this image.

The remaining images are out the back of where we live, in Canberra Nature Park, or in the case of the first image, in the back yard.

Kangaroo in the back yard, through the dining room window.

Over many months towards the end of last year there was a severe drought and there was no grass left for the kangaroos on Mount Ainslie.  The kangaroos would come down at night to eat on the roadside grass verges.  At the same time our back fence had disintegrated so we had kangaroos coming in at night as dinner guests.  This is one still there in the morning.

Before we left on the Uzbekistan trip at the end of September, there were many kangaroos on the mountain and we would often see mobs of twenty or thirty.  One time I counted and we saw one hundred and thirty kangaroos on our half-hour morning walk.  They were under pressure at this time and we found two discarded kangaroo fetuses in our back yard.

Close up of young kangaroo.

When we came back from the trip there were none, or so it seemed.  They had either found alternative pasture, perhaps beyond the other side of the mountain, or I suspect more likely, there had been a mass starvation event.  Numbers recovered a bit and we now usually see between three and ten kangaroos on our morning walk.

Canberra has a controversial annual kangaroo cull.  Kangaroos have greatly increased in number due to clearing of forests with European settlement and there are around fifty million of them in Australia.  The Australian Capital Territory Government says that without a cull there will be greater kangaroo population explosions and crashes, while rare plants are threatened when the kangaroos feel pressured to eat everything in sight.  Animal rights groups are opposed to this and demonstrate against the Government.  If I correctly interpret these events, the Government may have a sensible strategy.

On our walk every morning we go past a hollow log where a family of Cunningham’s Skinks live.

If it’s warm enough they come up on top of the log in the sun, perhaps also to catch passing insects.

This is a small one. 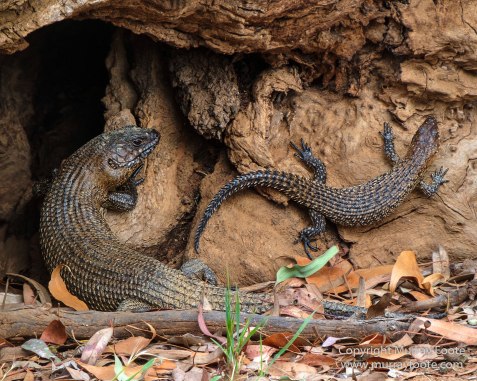 They are much larger than a garden skink.  They grow to 40 centimetres (16 inches) and are viviparous (give birth to live young).

All of these Cunningham’s Skink shots are focus stacked, in other words, multiple images combined for depth of focus.

(No, really, that’s what they’re called).

Superb parrots are a bird of inland New South Wales and Canberra is on the edge of their range.  They are increasing in Canberra but this is partly because they are being pushed out of their normal habitat by climate change and land clearing, and they are classified as vulnerable.

They prefer to nest in two species of eucalypts, Scribbly Gums and Blakely’s Red Gums with a trunk diameter of 1.1 metres or more, and 95% of their natural woodland environment has been cleared.

At one point in our morning walk there is a dead tree that forms an archway over the path.  I used to sometimes hit my head on it until it settled a bit lower.  One day there was a dragon stretched out on the top though pretty well camouflaged.  I went back for my camera and this image is also focus stacked.

Males grow to about 60 centimetres (24 inches) long and they are diurnal.