Where are we now?  Leh is in Ladakh, which is in the Indian State of Jammu and Kashmir.  The rest of India is to the south, Pakistan is to the west and north and China is to the east. The frontier with China is only about 100 kilometres away.  Kashmir is predominately Moslem but Ladakh was an ancient Buddhist kingdom and Leh was its capital.  Ladakh and particularly Leh had great significance through the centuries as a Silk Road entrepôt, one of the main routes for trade between China and India.

We had several days in Leh at least in part to acclimatise to the altitude (3,500 metres or 11.500 feet).  The temperature was cool but it is not possible to provide accurate figures because online data is inconsistent and implausible.  My best estimate is a maximum of -5ºC and a minimum of -20ºC (23ºF to -4ºF).

The first afternoon, the others wandered off to explore Leh but I stayed to rest, not because of altitude sickness or Indian gastric problems but from a heavy cold/flu I had picked up before I left.  The next day I was OK and  we left early for a dawn prayer meeting at Thiksay Monastery.  This dates from the mid 15th century and is the largest monastery in central Ladakh. 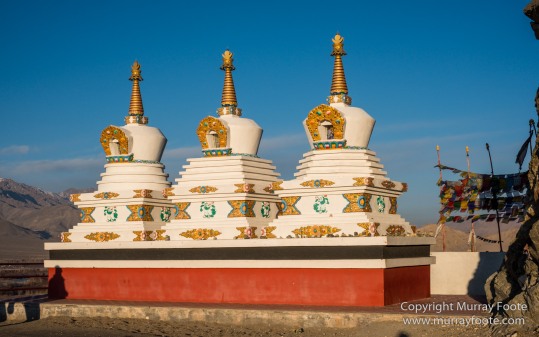 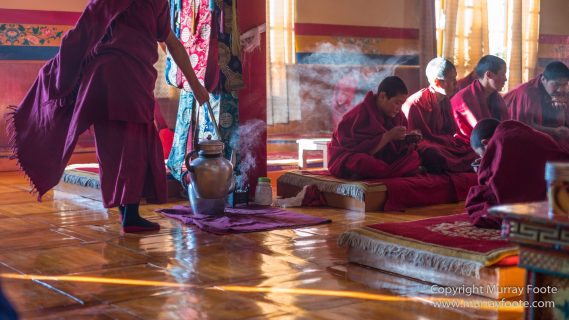 Although Ladakh is part of India, it is culturally part of Tibet.  Buddhism arrived in Tibet in the 7th century AD from both India and China but the Indian Mahayana form of Buddhism survived.  Tibetan script arrived at the same time, derived from Indian script.  This script is understood from Ladakh to Amdo in the east of Tibet, even where different dialects prevent effective conversation. 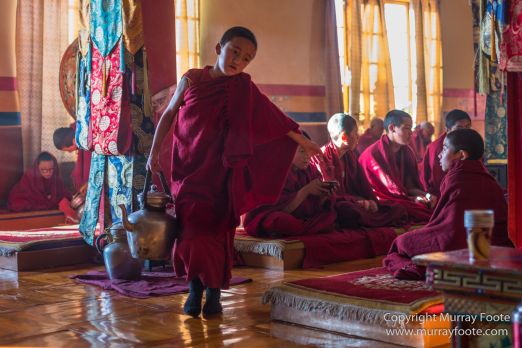 There was an earlier religion in Tibet called Bon.  This was incorporated into Tibetan Buddhism and 10% of Tibetans are still followers of Bon. 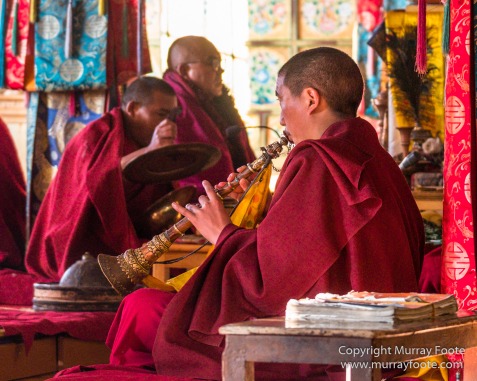 China advances the claim that Tibet has always been part of China and this is clearly nonsense.  From around 590 to 640, Namri Songsten and then his son Songsten Gampo formed a unified Tibetan kingdom.  For two hundred years after 640, Tibet underwent a remarkable military expansion that culminated in an empire that stretched from Mongolia to Burma.  It included Qinghai (to the current Mongolian border) and Sichuan in China, Bhutan, Nepal and Bangladesh, as well as parts of India, Myanmar, Pakistan, Afghanistan, Kyrgyzstan, Kazakhstan and Tajikistan.  In the process it swallowed up the old Zhang Zhung Empire in Western Tibet.

In 763 they sacked Xian, the capital of China.   The empire started to disintegrate from the end of the eighth century and in 842 the dynasty collapsed with the death of King Lang Darma. He was championing the dominance of the Bon religion and was assassinated by a Buddhist monk.  Buddhism collapsed along with the kingdom but survived in the Kingdom of Guge in the west as well as Amdo in the east and in due course regained hold over all of Tibet.

It was many years before Tibet was united again and political power lay directly or indirectly with competing Buddhist schools.  Initially, their leadership was hereditary but from the twelfth century they started to switch to succession by incarnation.  The Mongols raided Tibet many times in the thirteenth and fourteenth centuries but due to their respect for Tibetan religion, they became protectors rather than colonisers.  In 1578 Sonam Gyatsu arrived in Mongolia at the invitation of a Mongol Chief.  He stayed there for ten years and received the Mongol title of Dalai Lama, thus becoming the first Dalai Lama.

Initially, the positions of the Dalai Lamas were somewhat precarious because although they had the support of the Mongols, they were not from the dominant school.  However, from 1617 to 1682, the fifth Dalai Lama reunited and expanded Tibet, forming the first unified state since the monarchy.  He also established Lhasa as the capital and built the Potala Palace.  The next few Dalai Lamas were not as successful and Chinese influence (Qing or Manchu Dynasty) increased including a seizure of power by a General Phola in the middle of the eighteenth century.

The Qing dynasty became weaker during the nineteenth century and the thirteenth Dalai Lama, Thubten Gyatso (1876-1933) managed to retain Tibetan independence from Russia, China and England during the period of “the Great Game”.  England invaded in 1904 however, then withdrew after forcing a trade treaty to exclude Russia.  (See here for some remarkable photos and drawings from the 1904 invasion). The Chinese tried to use force to take control of Central Tibet from 1907 to 1911 but this ceased with the fall of the Qing dynasty.

Tenzin Gyatso, the current and 14th Dalai Lama, was born in 1935 and enthroned in 1940.  The Chinese invaded in 1951 and the Dalai Lama fled to India in 1959.  Apart from the first years on the 1950s when the Chinese were establishing themselves and a period of liberalisation from 1979 to 1987 under Hu Yaobang, Tibetan culture has been under siege, and widespread Chinese immigration encouraged and subsidised.

Ladakh including the area around Leh is not directly affected by Tibet’s current situation, being part of India.  Cultural Tibet is also much larger than what we normally think of as occupied Tibet (or Xiozang or Tibet Autonomous Region).  It includes a region about as large again to the north-east and east in Qinghai and Sichuan.  It also includes areas in Ladakh and Himichal Pradesh to the west in India, Nepal, Sikkim, Bhutan and Arunachal Pradesh to the north and north-east of Assam. 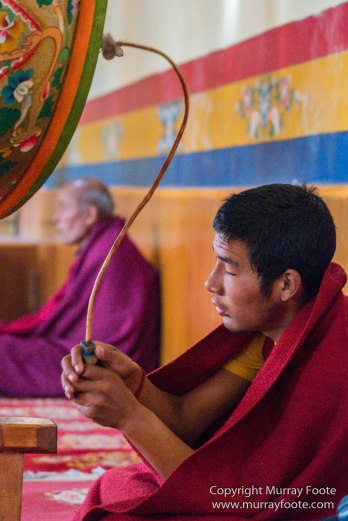 Humans lived in Ladakh from around 6,000BC and in Tibet from around 21,000BC.    From around 1500BC, Western Tibet became colder and drier so prior to that, Ladakh would have been more conducive to settlement.  Ladakh was part of the Zhang Zhung Empire (500BC to 650AD).  This was based south of Leh and just to the west of Nepal and followed the Bon religion, precursor of Buddhism in Tibet.  Ladakh was also part of the Kushan Empire (30-375AD).  This had Iranic, Greek, and Indo-Aryan origins and initially used Greek as it official language.  It stretched over parts of India, Nepal, Pakistan, Afghanistan, Uzbekistan, Kyrgyzstan, Tajikistan, Turkmenistan and China.

Some Buddhist influence reached Ladakh as early as during the time of the Indian Emperor Ashoka (268-232BC) and later via the Kushan Empire.  However, when the Tibetan Kingdom collapsed in 842, there was a large influx of Tibetan immigration and the pre-eminence of Buddhism in Ladakh probably starts from then.  It is also the start of a period of Ladakh as a significant independent state.

Descendents of the assassinated Tibetan king Lang Darma formed the Kingdom of Ladakh over much of Western Tibet and the first king was called Paldegon.  Its centre was Shey.   This is about 15 kilometres from Leh and just before the monastery of Thiksay that we are currently visiting.  However, I did not know this at the time and took no photographs of it.  There may have not been much to see from the road though as it is largely ruined.  This map shows the territorial extent of Ladakh during the reign of King Nyimagon, about 975 to 1000AD.

In the 15th and 16th centuries, Islam penetrated to Ladakh, first by persuasion and then by several invasions.  Ladakh’s second city, Kargil, and the surrounding area became Moslem.  In the last years of the sixteenth century, Ladakh king Jamyang Namgyal avoided violent takeover by agreeing that he and his subjects become Moslem.  However, the Moslem threat eroded and the area of Ladakh around Leh stayed Buddhist. 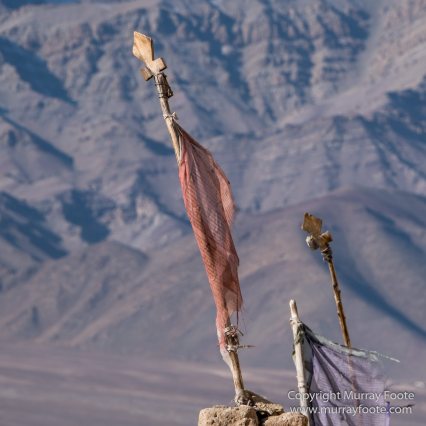 From 1470, during the period of the Moslem threat, the Namgyal dynasty became kings of Ladakh, based in Leh.  They expanded their territory greatly into Western Tibet, as shown in this map for the late 16th century during the reigns of Tsewang Namgyal and Jamyang Namgyal.  They lost most of their Western Tibet territories in the late 17th century after a war with Tibet. 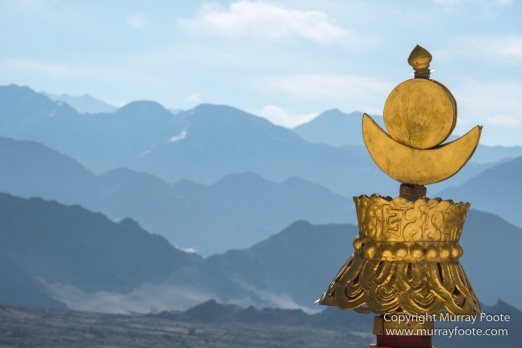 In the early 19th century it was the turn of the Sikhs who developed a Sikh Empire in Northern India.  They took Kashmir in 1819 and sought special privileges in Ladakhi trade.  Believing Ladakh was favouring the British, they invaded in 1834 under General Zorowah Singh.  In 1841, Zorowar Singh’s army advanced further to take Tibet but short of supplies in the Tibetan winter, they were surrounded and the army destroyed.  Raja Gulab Singh sent another army in 1842 and they retook Leh and made a treaty with Tibet.  The Sikh Empire was secular though, so Buddhism in Ladakh was not threatened. 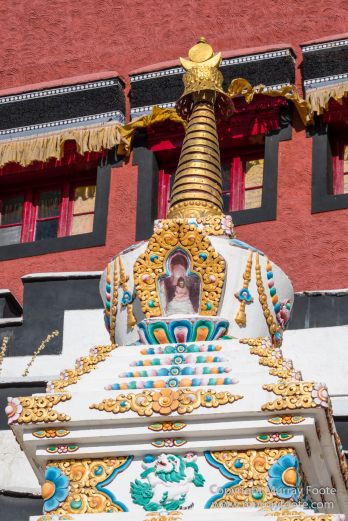 In 1849, the British defeated the Sikhs after two wars and took over their empire but Gulab Singh and his descendants became maharajahs of Jammu and Kashmir (which includes Ladakh).  When India became independent in 1949, the maharajah opted to stay with India but most of his subjects were Muslim, which led to the India-Pakistan War and Pakistan took over about a third of Kashmir in the north, including Baltistan in the north of Ladakh.  Another small part of Ladakh, around the Siachen Glacier, remains contested by Pakistan and India.

There was also border contention with China after it invaded Tibet and this led to the Sino-Indian War of 1962.  The main area of contention was an area called Aksai Chin, a dry uninhabited desert area.  The British had frequently redrawn the border here and China had already made a road through this area from Tibet to Xinjiang which India had not noticed for some years.  After the war, China had possession of Aksai Chin while it withdrew from its occupation of Arunchal Pradesh, north of Assam.  Some contention remains and there was a border incident as recently as 1999. 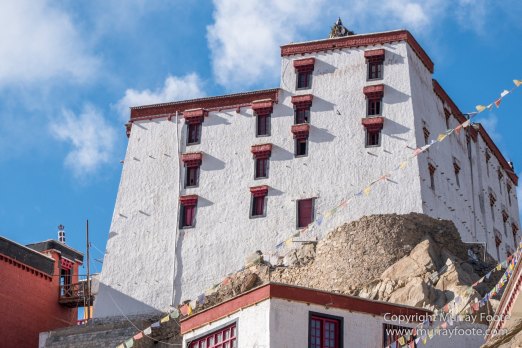 With this post, this blog has over 300,000 words of comment and description.  Some time ago I was reading the biography of Johanna I of Naples which has 323 pages.  I calculated 456 words per page and at that rate, this Blog could fill more than two such books.