At 11:30pm, we were summoned on deck for a sighting of a couple of blue whales.  It being very far north in summer, there was still plenty of light and the sun wasn’t intending to set.  We sailed along with them for some distance, although they were several hundred metres away.

Blue whales are the largest animal ever known to have lived, at up to 30 metres long and 180 tonnes in weight.  This is one of the reasons why you are most unlikely to see a blue whale in an Olympic-size swimming pool.  The largest dinosaurs may have been as long but their length is usually an extrapolation from just a few vertebrae and as land animals, their weight was a fraction of the blue whale.

It is much easier to photograph a blue whale than a humpback whale because they swim along in a straight line and surface several times before going down.  This means it is easy to predict where it may come up again and may also account for why they were hunted almost to extinction by the early 20th century.

Taking photographs of the whales is one thing, but including some of the setting gives another dimension of context. 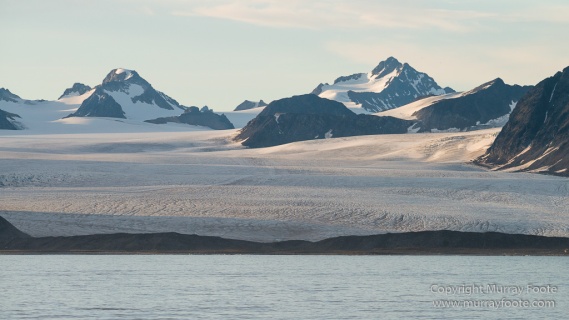 We were somewhere near the north-west corner of Spitsbergen.