The initial images are views from the 4pm ferry from Andenes to Gryllefjord.

From left to right:  First there is the ferry from Andenes to Gryllefjord.  Then there is a short drive to Hamn.  Finally, my route to return to Tromso the next day.

… continuing with views from the ferry….

The lighthouse gives you a sense of scale. 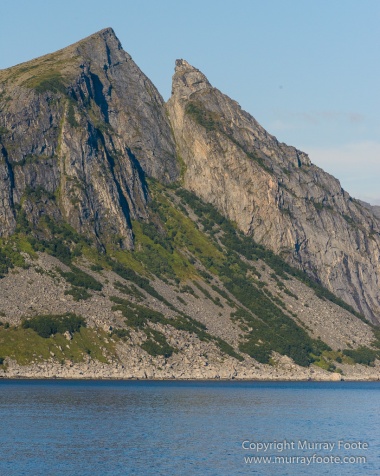 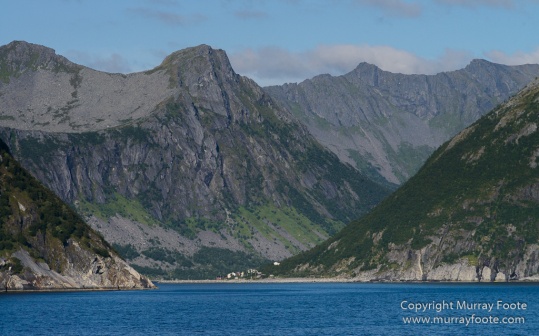 Gryllefjord is starting to appear in the distance.

This is still from the ferry.

Next, a couple of views from the drive to Hamn.

Having arrived in Hamn, settled in and eaten dinner, there was still time for photographs of the sunset. 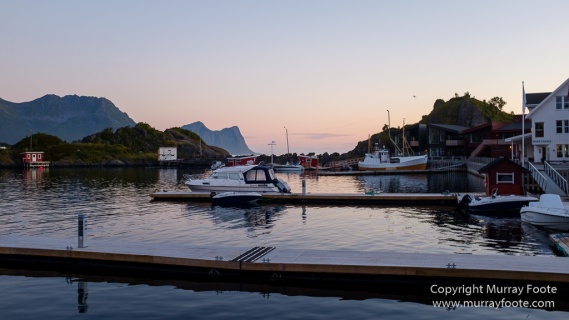 After sunset, some of the boats moored in the Hamn marina.

However, the next morning I woke up with a swollen leg and greatly reduced mobility.  I hobbled to the office and they pointed me to the nearest doctor available in a nearby town, which must have been Finnsnes.  The doctor performed a test which indicated that I had Deep Vein Thrombosis.  This is a serious condition that can produce a blood that causes a fatal embolism in the brain.  However the test was not conclusive and she booked an ultrasound for me at Tromso Hospital.  I was instructed to travel straight there by the highway and not stop to take any photographs.  When I got to the hospital I was whisked through with amazing speed and efficiency and fortunately I did not have deep vein thrombosis.  Instead, I had a Baker’s Cyst, a build-up of fluid behind the knee that would go away by itself in time.   In the meantime, my mobility was somewhat restricted.  I suspect it was due to pushing myself to far and too many consecutive hours spent on aeroplane or car seats.  Later on that day, I was on the plane, on my way to Spitsbergen.

In many ways I don’t think I did Lofoten justice.  Due to misadventure, I lost two and a half days out of five and a half, and had to drive past some wonderful vistas and light due to lack of time.  More than five and a half days would have been good as well.  At least was able to continue with my journey.

9 comments on “Andenes to Hamn”