We had now finished the Southwest Canyonlands Tour with Udesign Phototours.  We drove from the Grand Canyon to Flagstaff Arizona and all went our separate ways.

I had a flight from Phoenix to New Orleans to catch the next day and I would meet up again with Jools in New Orleans. She had left for a conference a few days previously. I picked up a rental car and headed for Phoenix via Sedona.

The road from Flagstaff to Sedona is rated as one of the most scenic in the United States.   It is certainly very scenic but the problem for a photographer is that it is a narrow road and there are very few places where it is possible to pull over and stop.  Here is the roadside stream at one such place.

Coming into Flagstaff there were a number of these magnificent formations beside the road.

Sometimes the seasons seemed to get temporarily confused but I kept on going.

…past a number of commanding buttes….

Sedona was not what I was expecting.  I thought it would be a little village in a wilderness area.  Instead, it is a large town of 10,000 people that sprawls out in a valley against a magnificent backdrop.  I did take a photograph of the town and its surrounds but I thought the town detracted from the view so I haven’t included it.

From Sedona I drove on to Montezuma’s Castle, as we see here.   It has of course nothing to do with Montezuma.  The first nineteenth century Anglo-American visitors probably thought the local Indians were not capable of being civilised.

Obviously, it is a highly defensible position but that is not the only reason for its construction there because in season the creek flooded and the valley became a flood plain.

Here is another dwelling structure in a cliff nearby.

After Montezuma’s castle I headed back towards Sedona, but not quite that far, to Red Rock Crossing and the view of Cathedral Rock.

This is a location that was recommended to me by Tour Photographer Glenn Tamblingson, who lives in Flagstaff.

I had all but missed the late afternoon light and sunset but that didn’t matter really as different opportunities presented themselves as the light receded. 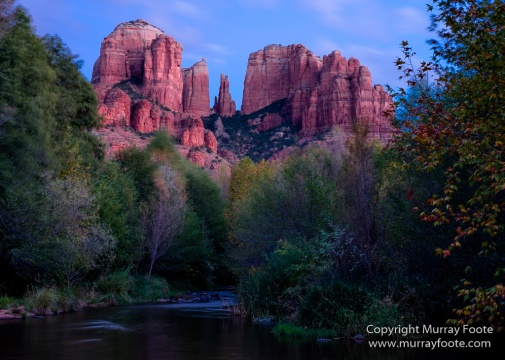 (Three of the images in this post were infrared.  Perhaps you noticed).