This was the day I was to catch a plane to fly out to Aberdeen but it was to leave mid-afternoon so I had plenty of time to visit some places first.

Very early in the morning this was the view where I was staying at Burrastow, with fog and no dawn colours.

I headed off to the west and this is Buxter Click Mill, on the western tip of Mainland.  The roof evidently used to be turf, perhaps atop stone slabs.  Hopefully someone will get around to restoring that to allow the wooden roof structure to survive. 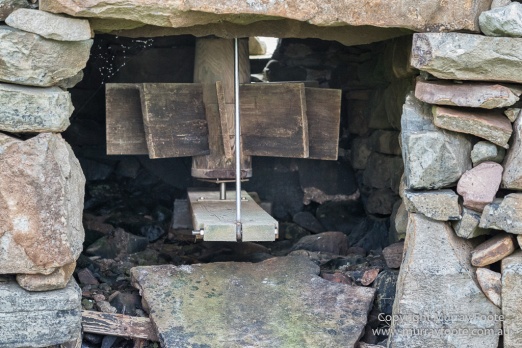 Underneath the mill,  these are the wooden blades the water turned to grind the barley.

Hours later, I have turned around and am heading for Sumburgh on the south tip of Mainland.  I stopped to visit the lime kins of Fladdabister but found they were a longer walk than I had time for.  These are abandoned crofting houses by the sea.

These two images are on the west coast, near Scousburgh.  The island is Colsay.  The second image is available larger than the usual expanded size if you click on it. 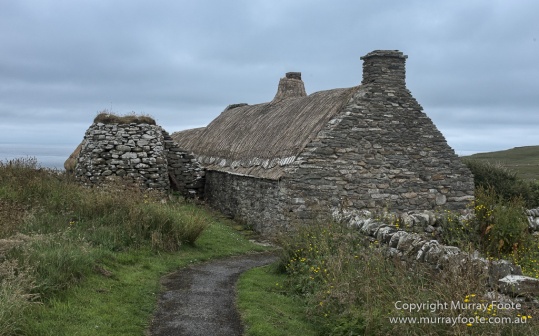 This is the Croft House Museum.  It is a nineteenth century ben and but house, such as we saw at Corrigal Farm Museum in Orkney, with living area, barn and byre under one roof.  Unfortunately it was closed, probably for lunch.

This is in Sumburgh at Old Scatness, a site under excavation with overlaid remains of iron age, Pictish Viking and Mediæval structures.  This includes an iron age village with broch, wheelhouses and later dwellings.  It was found during construction of an airport access road in 1975 which was then directed around it.  Unfortunately the site was also closed and all I can show you is two reconstructed structures.  I have no specific information on what they are, though I presume the roofed one on the left is an iron age house.  However, Jarlshof was open and that will be the next post….

7 comments on “Return to Sumburgh”