I flew in to Orkney on the 21st and en route to my accommodation, stopped by in the main town Kirkwall to briefly view the Earl’s Palace and the Bishop’s Palace.  I toured them in more detail later so I’ll include the images I took on arrival in a later post or posts.

Next day I was due to fly to the northern islands of Westray and Papa Westray.  This was to include the world’s shortest commercial air route between Westray and Papa Westray, early neolithic ruins on Papa Westray, massive bird cliffs and mediæval ruins on Westray.  I thought I could save time by flying there rather than taking the ferry but I didn’t count on the fog.  After more than half a day gone and with no plane in prospect, I abandoned that plan and arranged for a further night on Mainland (the main island of Orkney).

Next I had to decide where to go for the rest of the day, so I decided to visit the Brough of Deerness, which was near the airport.  I was caught out here as well, because I thought there might be a broch here, but no, it’s a different word.  A broch is a round stone tower from 500BC to 500AD and a brough is a headland or peninsula.  But having got to the Broough of Deerness I went for a walk.

This is the Gloup.  It is a Geo, a deep cleft in the cliffs.  It was once a sea cave but has mostly collapsed.  The sunlight on the water at the top is through a tunnel to the sea. 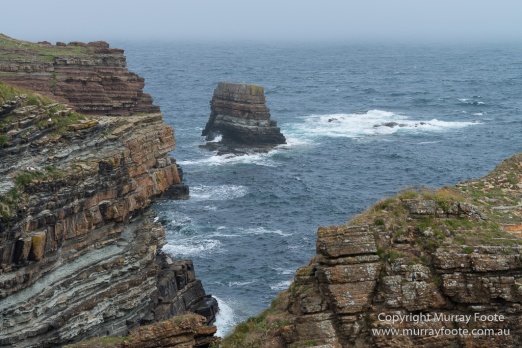 A view from the cliffs on the way to the Brough.

Sea cliffs and fog, near the brough.  The brough itself is almost an island and is off to the right from here.  There is a climb down the cliff and then a path up the cliff on the other side.

On top of the Brough is the remains of this ancient chapel.  It appears to have been a wooden structure before the arrival of the Vikings in the tenth century and was rebuilt in stone in the 11th or 12th century after the Vikings converted to Christianity.  We can see a stone altar against the back wall.  The chapel began to fall into disrepair from the 16th century but was a focus of devotion until the mid 19th century.

Nearby was a farm with hay bales all rolled up for the winter.

They have been making hay while the sun shines.