This is the entrance to the cemetery at Village Bay, Hirta, St Kilda.  It predates the village of the 1830s and may be many hundreds or even thousands of years old, though the wall may have been rebuilt several times.

Here we are inside the cemetery.  It is roughly oval, approximately 25 meters by 18.  The rocks you see poking up are tombstones of an unknown age.  There were probably never any inscriptions on them as few islanders would have been literate before the nineteenth century.  We saw the same thing at Baille Na Cille in Lewis, earlier in this blog.

In 1851 there were 105 people on St Kilda, comprising 40 aged 0-14, 28 aged 15-29, 20 aged 30-44, 10 aged 45-59 and 7 aged 60+.  There was a similar distribution and total in 1822.  The population had previously been higher than this as we saw in the last post, though it was to fall later.  The island was settled for 5,000 years and the main settlement would always have been at Village Bay where there is the best harbour and the best farm land.  If we assume an average population of 150 and a life expectancy of 40 for those who got past 5 years old, and if people were always buried here, then there could have been very approximately 3,750 burials here over a 1,000 year period.  Burying in damp soils with no coffins (due to lack of wood) probably meant that even the skeletons would disappear after some hundreds of years.

When the street replaced the old village in the early 1830s, a couple of “faerie mounds” were demolished.  These may have been prehistoric grave mounds.

Another view, this time in infrared.  The plaque in the left foreground was erected by a former islander, Alexander Ferguson, in the 1930s or 40s in commemoration of both his parents.  The infrared makes the stones stand out in a different way from the grass. 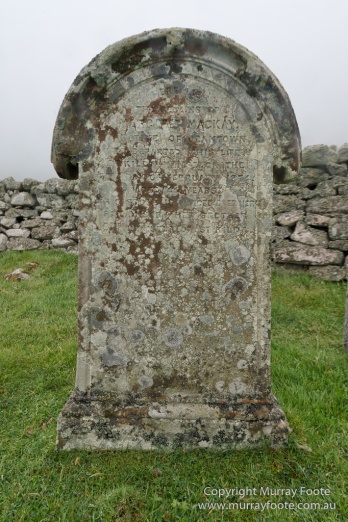 Here lie
the remains of
Margaret Mackay
native of Jeantown,
who departed this life
at St Kilda Manse on the
(?) day of February 1874
aged 44 years.
This stone is raised over her
remains by her brother
Minister of St Kilda.

So the most impressive tombstone in the cemetery was not for a native of St Kilda but for the sister of the Minister.  Jeantown is the old name for LochCarron village, on the shores of Loch Carron, on the mainland not far from Skye.

This one is for a native St Kildan, though.

“With Christ which is
far better”