Here we visit the tombs of Isa Khan Niazi and Humayan.

Isa Khan Niyazi was an official in the courts of Sher Shah Sur and his son Islam Shah Sur.  I know little of his life but he was made Governor of Multan in what is now Pakistani Punjab by Sher Shah Sur at the age of 78 or older.  His tomb was built from 1547 to 1548 and he died in 1548 at the age of 95.  I will provide some context of Sher Shar Sur when I talk of Humayan further below.  First though, I will discuss early Indian history (which is of such complexity that providing any kind of summary is a challenge) and then lead up to the period of these tombs. 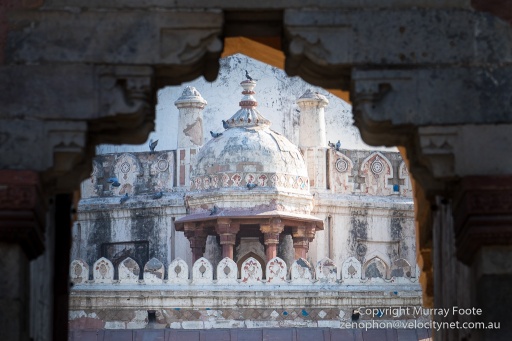 Humans have lived in India for a long time.  Homo Erectus was in India, perhaps as long as two million years ago.  Dravidian people from South Central India are related to Australian Aboriginals and therefore have probably been there for 60,000 years or more.

India (well, Pakistan for the main part) was also home to one of the worlds pioneer civilisations, Harappa.  It lasted from around 3000BC to 1700BC.  It was centrally organised with standardised urban planning, house design and construction.  It also had sewerage and relatively even wealth distribution.  It was not militarised; the mud-brick towns were not fortified and there have been no finds of weapons.  It was an agricultural society and in the end overwhelmed by a climatic event involving persistent floods.  They had writing but we cannot read it.  Where Delhi is now would have been just on its borders.

India is protected by the Himalayas to the north, jungle to the east, water to the south and the Thar Desert for most of the area between India and Pakistan.  Overland invaders come from the North-West, from Afghanistan or Persia.  New people coming in from the North-West after the fall of Harappa were herdsmen on horses.  Agriculture withered away.  Urbanisation didn’t commence again until about 600BC.  The next major state was Nanda, controlling the Gangetic valley for two generations from around 400BC.  Alexander the Great turned up in 327BC when it was in decline and the ruler had a huge army but was unpopular.  Alexander might have won or been annihilated but he turned back, just past the Pakistan border, after his troops rebelled.

The Nanda were replaced by the Mauryan Dynasty and the third Mauryan ruler, Ashoka, ruled over a vast empire from Afghanistan down to almost the southern tip of India.  Ashoka became a Buddhist and dedicated his empire to harmony and peace.  He was also influential in Sri Lanka and South-East Asia, particularly Thailand.  After his death the empire quickly fell apart. 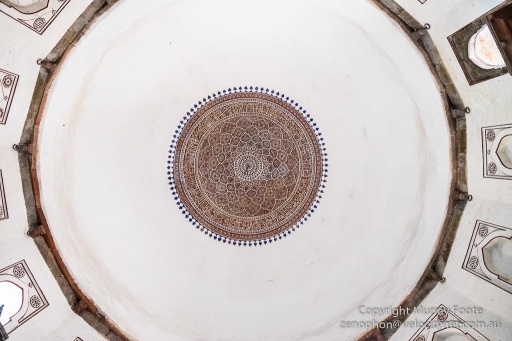 It was another 500 years before another large state appeared, that of the Guptas around 300AD to 400AD.  Based at Ayodhya below the western end of today’s Nepal, that empire came to include the Gangetic valley, stretched across to Gujarat on the west coast, and down the east coast almost as far as Sri Lanka.  The cultural influence of the Guptas is shown in the application of the name of the capital Ayodhya to Ayutthaya, the ancient Thai capital, and Jogjakarta or Ngajodya-karta in Java.  After an intervening period of disintegration, the Harsha Empire covered a similar area around 600AD, excluding the east coast. 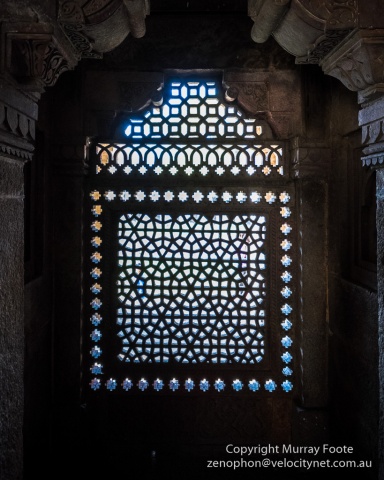 From 700AD to 950AD there was a fluctuating competition between three large states:  Pallas based in Bengal, the Gurjara/Pratiharas based in Gujarat and the Rashtrakutas based in the Deccan.   And from 950AD to 1100AD the Cholas built a substantial state based in Tamil Nadu, were very influential in South-East Asia and traded with China.

There were also many incursions from the north-west. The Huns were rebuffed by the Guptas around 450AD but defeated the Guptas and caused the downfall of the dynasty in the early 500s.  They then ravaged the north-west until finally expelled during the formation of the Harsha Empire.  The Arabs (/Moslems) reached the Indus in the early eighth century soon after conquering the Persian Empire but then stayed there for two centuries without greatly troubling India, contained by the rajas of Rajasthan.  At the end of the twelfth century, Moslem Turks from Afghanistan broke through and established the Delhi Sultanate.  After a few decades they controlled an area similar to that of the Harsha Empire.

The Mongols sacked Delhi in 1241 and they repeatedly invaded from 1298 to 1327 but they encountered the ferocious Ala-Ud-Din Khalji who repeatedly defeated them.  Under Muhammed bin Tughluq in around 1335 the Delhi Sultanate controlled most of India though many regions fell away in the latter part of his reign and especially in the succession struggle after his death.  His successor Firuz Shah Tughluq retained the Gangetic valley but after a defeat to the Mongols in 1398, the power of the Sultanate outside Delhi withered away.

Then in 1526 Babur (Zahir Al-Din Muhammed Babur) invaded from Afghanistan.  He was descended from Timurlane on his father’s side and Genghis Khan on his mother’s.  He had many years of experience, having previously taken and lost Samerkand three times.  He defeated two much larger armies near Delhi because as well as his 12,000 cavalry he also had firearms, specifically mortar, cannon and matchlocks and he was an astute military tactician.  He became the first Mogul Emperor, with an empire stretching from Afghanistan almost to Bengal and approaching Gujarat on the west.  However, he died after only four years, of natural causes. 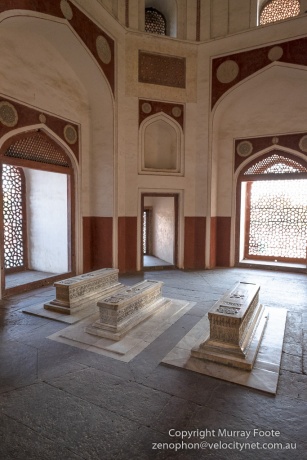 This now brings us to the two monuments I visited that we see here.  The second is Humayan’s Tomb and Humayan was Babur’s eldest son and successor.   He was talented and intelligent and a capable military leader but too much inclined to self-indulgence and opium.  This meant that periods of successful activity were followed by periods in which nothing much happened and where he left decisions to others.

Initially he had many threats to deal with.  First he defeated Mahmud Lodi, brother of Ibrahim Lodi, last of the Sultans of Delhi defeated and killed by Babur.  Then he conquered both Gujarat and Malwa.  At the citadel of Champaner in Gujaret, Humayan led the assault, scaling a seemingly inaccessible cliff with hammer and pitons in a “wildly audacious assault”.  Next he came to deal with Sher Shah Sur in Bengal.  Here he was roundly defeated and had to flee, first to Rajasthan for three years, then for much longer to Persia.  Sher Shah Sur was now emperor. 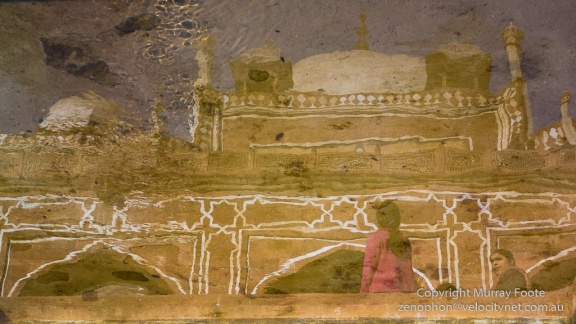 Sher Shah Sur had been an influential supporter of the Lodi Sultanate of Delhi and from his fortress base at Chunar, near Varanasi, successfully challenged and expelled Humayan. As imperial ruler he proved an exceptionally capable administrator.  For example, he reduced the prevalence of corrupt overly independent Governors by decentralising appointments with limited terms and treated all peoples and religions relatively equally.  He died of burns while successfully besieging a citadel in Gujarat when a rocket bounced off a wall and fired a pile of rockets he was standing beside.

We considered Isa Khan Nyasi’s tomb, towards the top of this post.  Isa Khan Nyasi was an official under Sher Shah Sur, as we described there.

Sher Shah Sur’s son was not as politically adept as his father.  When he died as well after a few years, the Empire degenerated into a succession conflict.

At this point Humayan stepped in again and after some battles regained his position as Emperor, after fifteen years of exile.  He saw off his three brothers who challenged him from their positions as regional Governors but he did not last long.   In 1556, within a year of regaining the throne,  he was on his roof to observe the rise of Venus, tripped on the stairs, fell and died.

Reflecting his period of exile in Persia, his tomb was designed by a Persian architect and incorporates Persian styles.

Nearby cricket.  Everywhere in India.