I went for a drive off Skye onto the mainland, using the bridge you can see here in the distance.  Skye is on the other side of the Sound of Sleat. 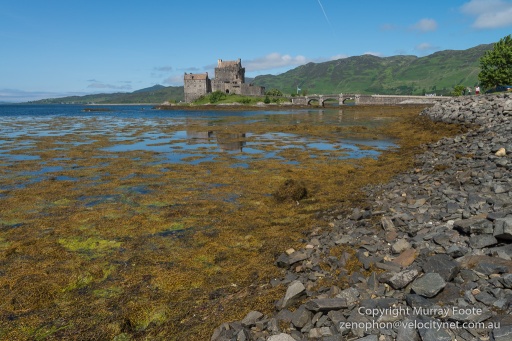 One of my main points of interest was Eileen Donan Castle.  the name refers to the Island of Donan, an Irish priest who arrived around 580AD.  There was probably a cell or religious community on the island from around that time but a castle was not built here until the thirteenth century.  At that time it was at a strategic sea-lane position between the Lord of the Isles and the Earldom of Ross.

There were four different castles on the site over the years and it was once much larger than it was now.  The area enclosed by walls was reduced to about a fifth of its size towards the end of the fourteenth century, probably to allow easier defending by a smaller number of men.  There have been many sieges and battles of the the course of the castle’s history. 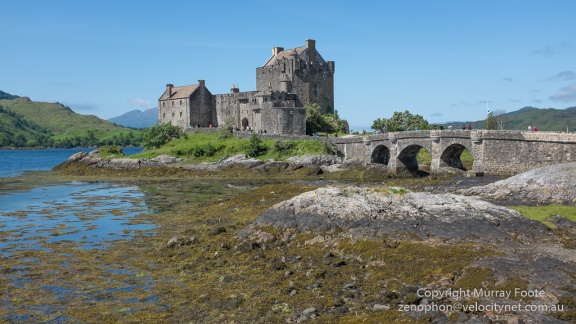 There were 46 Spanish soldiers stationed here in 1719 in support of the Jacobites.  They had a store of gunpowder and were awaiting delivery of weapons and cannon from Spain.  However, the English became aware of their presence and came with three frigates to bombard the castle for three days.  The castle still did not fall because the walls were fourteen feet thick in some places but a shore party took it.  The English then discovered the gunpwder and blew the castle up which then lay derelict for two hundred years.  Then in 1911, Lt Colonel John Macrae-Gilstrap bought the island and reconstructed the castle using original plans, finishing in 1932. 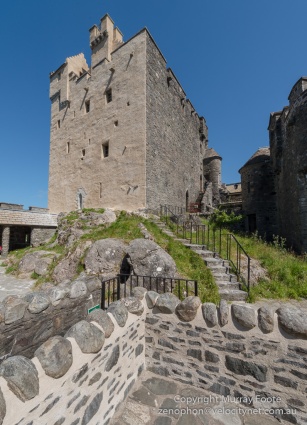 The keep of Eileen Donan Castle

The castle looks impressive from the outside and I am not able to show you images from the inside because photography there was forbidden.  This is perhaps understandable as it is quite small and there were many people.  However, although it is an impressive example of a small mediæval castle I was less impressed than I was expecting to be at the time, finding things like plastic chambermaids made it a bit too much like a mediæval Disneyland.

Looking back at Loch Duich from the road to Glenelg

From Eileen Donan I headed towards Glenelg and here is a couple of views looking back at Loch Duich. 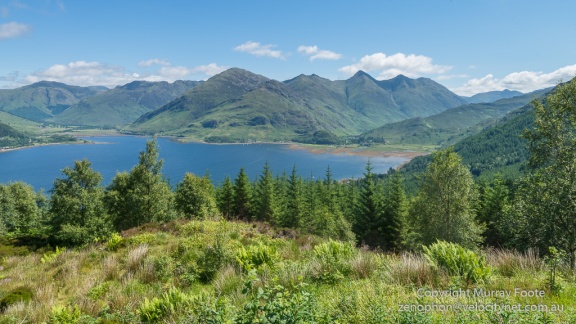 Looking back at Loch Duich from the road to Glenelg; the Five Sisters of Kintail in the background