From Cawdor Castle I drove back through Inverness and headed north.  I passed the battlefield of Culloden but didn’t have time to stop.  This was MacBeth country and the real MacBeth was little like the one in Shakespeare.  MacBethad mac Findlaich was Mormaer of Moray, a leading warlord and equivalent to an earl.

For several centuries the Scottish throne had alternated between cousins so that when a king died an adult warrior could take his place rather than an infant son.  MacBeth’s cousin Duncan I was the first to break this tradition in favour of primogeniture and MacBeth ended up killing him in battle.  By the standards of the time Macbeth had a long, peaceful and successful reign though he ended up killed in battle by Duncan’s son Malcolm.  His stepson Lulach succeeded him but only for seven months before he was killed as well.  MacBeth was effectively the last Celtic king of Scotland and succeeding kings from Malcolm III saw much more of of an English influence, with Gaelic no longer the language of the court and many changes to laws and customs.

I’m not aware of anything remaining in the area from the time of Macbeth.  Probably most buildings were wooden and later replaced by others on the same site.  However, Northern Scotland has a great wealth of remains much older than Macbeth’s time.  Amongst these are the brochs.

The first broch we encounter is Carn Liath, just south of Brora.  A broch is a drystone tower that was used as a fortified place of refuge by an extended family group.   The name of this one is a bit misleading because it means Grey Cairn.  A cairn is a funeral chamber covered in a heap of loose stones and it was thought to be a cairn until it was excavated and found to be a broch.

Carn Liath – the entrance from the inside

The walls originally extended much higher than shown here but we can see the characteristic low stone lintel over the door so that intruders had to stoop to enter, rendering them vulnerable as they came in.

This is the stone staircase in between the walls.  Brochs characteristically have two concentric dry stone walls with a stone staircase between them.  This enables construction that is lighter than a single solid wall yet probably just as strong.

Brochs are often located in strategic locations where intruders might be seen coming across the sea.  This is a view from on top of the remains of the near wall.  The broch probably had an internal timber structure with two or three floors and a roof.  It would have sheltered livestock as well as humans.  Some of the larger brochs had timber structures attached to the inside walls but with the centre left open. 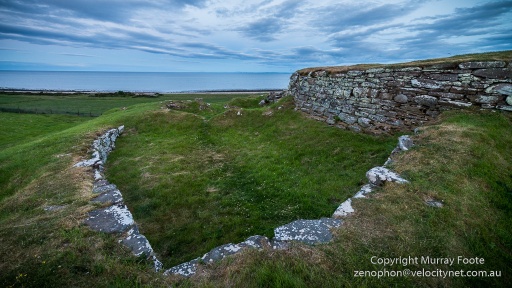 Carn Liath is unusual in that there are traces of habitations surrounding the broch.  It is not clear whether this dated to the time of the broch’s habitation or to a later time, perhaps when the broch had decayed or when threats from the sea had subsided. 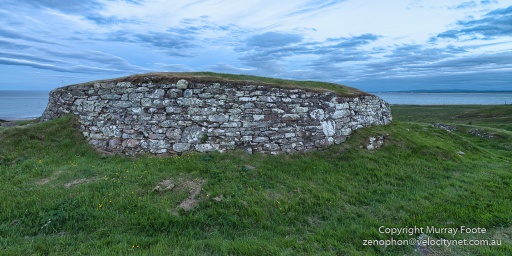 Finally, here is an overall view of the broch looking out towards the sea.

There were 500 or more brochs in Northern Scotland and the outer islands.  They date from about 500 or 600BC to 100AD but most of them were built between 100BC and 100AD.  Their primary purpose is obviously as a fortified refuge.  The main period of their construction suggests that refuge from Romans may have been a motivation though not in the case of those in remote areas such as Shetland as there is no evidence that Romans visited there.

There has been suggestion that brochs became equivalent to country mansion status symbols but they clearly have a defensive design as their primary purpose.  There must have been many hard winters where interlopers may have been tempted to raid and a roofed-over broch was also probably quite thermally efficient.

For more on brochs, check out George McIver’s brochs site.