A lone moai head beside the ahu

Ahu Te Peu, about 8 kilometres north of Hanga Roa , was once the focus of a significant community.  The main ahu is 70 metres long by 3 metres wide.  It was unfortunately damaged by the Thor Heyerdahl expedition in 1960 when they undermined the intact ahu during excavation.

Ahu Te Peu from the sea side

Looking out to sea from Ahu Te Peu, as the sun sets

The fall of the moai and the ahu

You have probably heard of the colourful account of Easter Island history that there was a revolution, the long ears against the short ears, with a climactic battle at the Poike Peninsula where the long ears got trapped in a ditch and all burnt.  Just another myth, actually.  Even the division between long ears and short ears appears to arise from a linguistic misunderstanding.  The terms probably mean fat people and thin people and refer to a class distinction rather than an ethnic or cultural one.  In any case there were many long-eared people into the late nineteenth century when the missionaries suppressed the practice.

There is also a theory that settlement may have been as late as 1200AD, that there may have been no population collapse in classical times and that all chaos and carnage was engendered by European contact, mainly in the nineteenth century.  I do not find this view credible and will stick to what I regard as the well-grounded view. 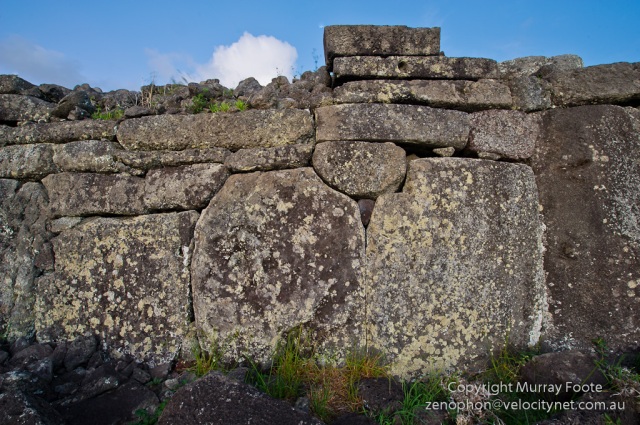 Classical Easter Island society reached its apex about 1500, when environmental constraints became increasingly felt as we saw in an earlier post.  Most of the trees were chopped down and there was no wood left for canoes so fishing was restricted.  All the sea and land birds on the island had been killed and eaten apart from a few on small offshore islands. Soil erosion undermined the productivity of the agricultural land.  Clearing of the forests must also have exacerbated water retention and water supply because Easter Island has porous volcanic rock.  Burgeoning population threatened to overwhelm productive capacity and there was nowhere to migrate to and no capacity to do so.

In classical Rapanui society, the ariki mau (or paramount chief) had a direct line to the Gods, was in fact directly descended from them.  So to a lesser extent were the ariki of the clans and the ivi atua or priests.  They and their ancestors guaranteed the prosperity of the society, which in turn justified the huge effort of building ahu and moai dedicated to them.  The society had clearly been one without major conflicts because their monumental structures were places of worship rather than military fortifications.  This contrasts, for example, with New Zealand Maori who lived in fortified hill pas.  Erosion to the economic basis of Easter Island society not only undermined the credibility of the ariki, it set in motion fundamental social changes and civil war.

Ahu Te Peu – some of the stonework is particularly fine.

Rather than a sudden collapse, it was a slow process during the huri moai or decadent period, from 1500 to 1722, and maybe beyond.  While the pace of construction slowed after 1500, construction continued on ahus and moai possibly as late as 1680.  Inclusion of older and often broken moai into foundations of later ahu shows that the periods of construction and destruction overlapped.  At the same time, increasing shortage of resources led to destructive competition between tribal groups.  The warrior class matato’a, also known as tangata rima toto (the men with bloody hands) came to prominence and the mana (power, prestige) of the ariki declined. Archaeological sites from this period have a high incidence of very sharp obsidian spearheads (mata’a) that were lashed to wooden shafts.  Middens from this period also show a very high incidence of charred and fractured human bones, many from juveniles, which may indicate cannibalism.

Tribal conflicts and blood feuds overturned the moai of rival clans and despoiled their ahus.  Overturning moai also sought to eradicate the mana of the ariki ancestors, since these represented a now oppressive system that had failed to deliver prosperity.   Most moai were overturned onto a pile of stones designed to break them in half.  Moai overturned on their backs could have their eyes or eye sockets hacked out.  Actually, in most cases, the moai would not have had eyes at this stage for it is generally thought that there were few sets of eyes and they were inserted for special ceremonial occasions only.  Either way,  the clear intent was to destroy the mana of the moai. 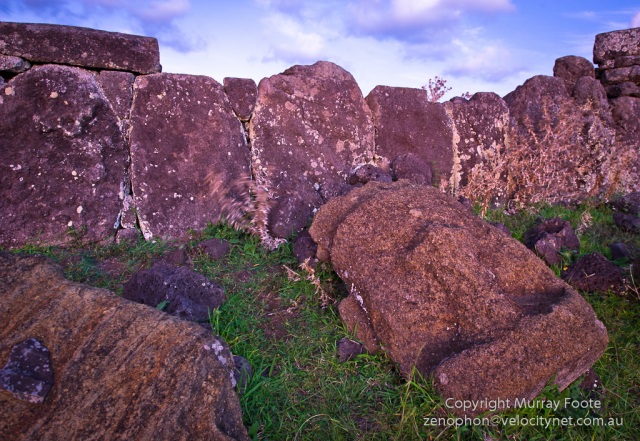 When the first Europeans arrived in 1722, most or all of the moai were still standing and the last one (Moai Paro at Ahu Te Pito Kura) was overturned sometime between 1838 and 1864. The Rapanui appeared well fed and peaceful, though admittedly this was a  fleeting visit to a single location.  By this time perhaps half the population had died but they appeared to have stabilised with a new dominant religion and presumably a greatly modified social structure.  The classical society was overturned yet the ravages to the population and culture had barely begun.  Towards the end of the nineteenth century, due to the impact of external contacts, the population was around one percent only of what it had been at the peak of the classical era and much of the cultural memory was erased.