Ranu Raraku is where the Rapanui made the vast majority of the moai. Most of the moai were made from volcanic Tuff, a form of compacted ash originating from a pyroclastic flow. Since they did not have metal, they worked the moai with stone tools, using the harder basalt. There were also some basalt moai, which must have been truly challenging to carve, and dressed basalt stones were included in many ahu.

On the afternoon of the 22nd, we turned up at Ranu Raraku but we did not appreciate that, as with Orongo, there were opening and closing hours, so we had half an hour or so only.

A moai staring out into the distance, late in the afternoon.  ….

On the morning of the next day we returned.

Here is a view on Ranu Raraku from the road in.  You can click on the image for a larger view – then click the bottom right icon for full screen and use icons or mouse wheel to zoom in and out.

You can see over 50 moai in the image. There are apparently 397 at Ranu Raraku, including some on the inside of the volcanic crater.

I understand that here are also some large holes carved into the rock at the top of the cliff, five feet deep and two feet in diameter. Logs fitted into the holes acted as levers in conjunction with huge quantities of rope made from bark to assist in lowering moai down the slope below. 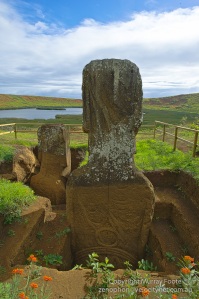 First we headed off into the crater. Here we found a couple of moai under excavation by archaeologists. Many moai originally had carving of various designs on places like the back. This can be difficult to see where they are in the open air due to erosion and fungal attacks. Here we have some moai emerging from the earth with the carvings on their back intact.

Click on the image to see this in much greater detail. This actually takes you to a slightly different and very large image taken at the same spot and time. Once again, bottom right icon for full screen and use icons or mouse wheel to zoom in and out.

Towards the bottom of the back is a circle above three arcs, above an “M” symbol.  I have read that this represents the sun above a rainbow and rain underneath.

Here are those two moai from the front. While not an image that’s likely to end up on anyone’s wall, it usefully shows some of the context. The excavation holes are quite deep, say around three metres. This shows that a lot of sediment can be deposited over 600 to 1,000 years. It also might indicate that the volcano was originally forested and removal of the trees for mining and other purposes has accelerated erosion (and deposit of sediment).

There are also at least four unfinished moai lying on their backs. Such moai can often be hard to notice and no doubt there are many more buried under the soil at Ranu Raraku.

Behind the two upright moai are the holes where they were chiselled out and removed, though you can’t see that very well. They would have been moved downhill a short distance and then raised erect. There are also other places visible where moai have been excavated from the slope and removed.

The last stage in the chiselling out process was removing the “keel” under a moai, apparently by hitting the keel with logs.  The moia was presumably supported by a wooden frame or ropes but it still sounds rather dangerous. 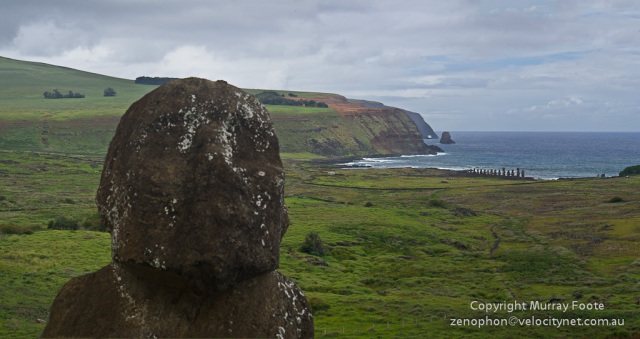 Tukuturi with Ahu Tongariki in the distance

The image above shows the eroded head of the moai Tukuturi with the Poike Peninsula and Ahu Tongariki in the background. Unusually, this is a kneeling moai with a beard and is similar to other stone carvings from Eastern Polynesia. It is probably quite old. Thor Heyerdahl rediscovered it and re-erected it in 1955-56.

Here are some moai on the slopes of Ranu Raraku.  In the distance you can see a small pointed hill (Maunga Toa Toa) and the coast is just behind that.  The main moai road leaving Rano Raraku went just to the left of that hill. 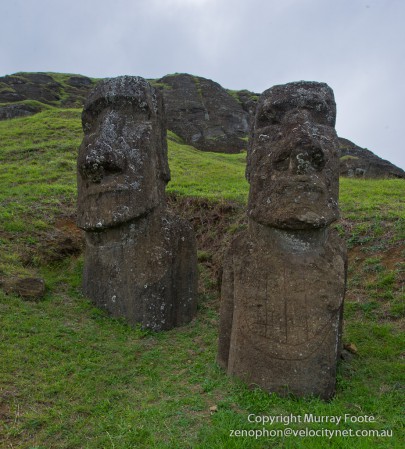 The right-hand moai has a European sailing ship carved on his chest.  There is also a line from it that goes down to a turtle, just half visible near the grass.

Here is my travelling companion Greg, giving scale to two large recumbent moai.  They may be finished because they were probably never intended to go anywhere.

This is the largest moai, known as El Gigante or Ko Tetu Kena.  I might have been able to get a better image from closer, but you can see the sign – this is as close as you are allowed to get.

El Gigante is about 20 metres long and is estimated to weigh 270 tonnes.  It was probably never intended to move and it is difficult to imagine how this might have been possible.

A moai relaxing in the sea breeze 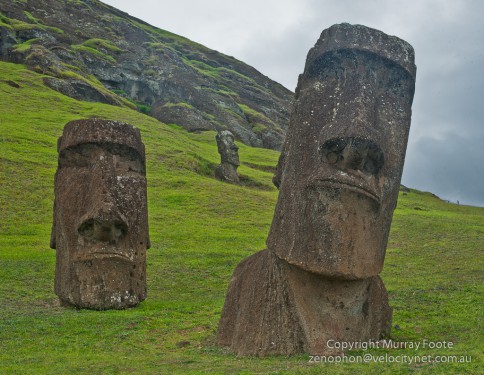 A trio of moai

The task of chipping away to construct a moai is awesome enough. The task to move the moai up to about 20 kilometres away over uneven terrain was probably much larger.

How they moved the moai is not really known.  There have been many theories over the years:

There have been many field tests of the different methods.  Logs and levers proved viable but the test was on an even flat surface only.  “Walking” the moai proved viable but only for short distances or the base became damaged.  “Walking” might be viable as a final method for getting them the last metres onto an ahu which often backed onto a cliff.

It has long been known that there were moai roads, in fact quite a significant network over much of the island.   It was assumed that these were flat.  However, about a decade ago, Charlie Love excavated some of them and put many of the theories above in question by determining that the roads were in fact V-shaped or U-shaped.  The edges of the roads were also faced with stones.

This suggests (to me, at least) that the design of the roads was intended to minimise the risk of sideways movement while moving the moai.  Perhaps they mounted the moai on wooden frames that were designed to fit the contours of the roads.  Because the roads were not level, this seems to rule out the use of log rollers.  Two explanations occur to me:  (1) perhaps they laid split logs vertically along the road, plus some lubricant; or (2) perhaps they used round stones.  Either way, they wouldn’t need to line the roads with the logs/ stones because they could pull them out from behind and replace them in front as the moai moved.

Love also found holes at regular intervals on each side of the roads where there was a slope.  These were evidently to use logs as fulcrums to assist moving the moai or to help prevent them slipping back.  However the Rapanui did it, the organisation and effort required is hard to imagine.