Links go to posts with the colour versions of the images (where there may also be more information). If an image does not have a link (or a caption), the preceding one applies. 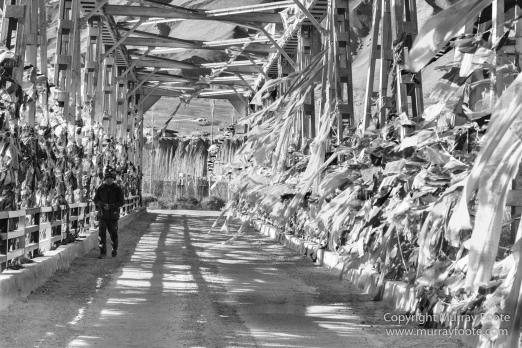 A bridge festooned with prayer flags and banners.

Our drivers conducting a ceremony to bless our trip with good fortune.

Ponies coming to pick up our baggage to the camp. 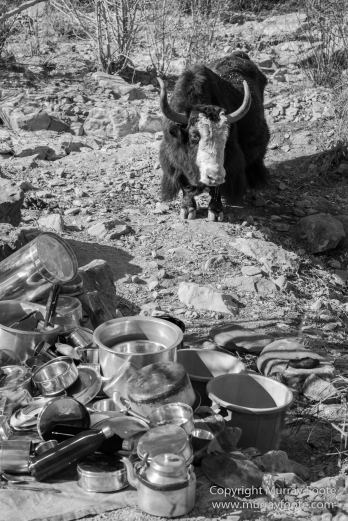 Tea is on the way. 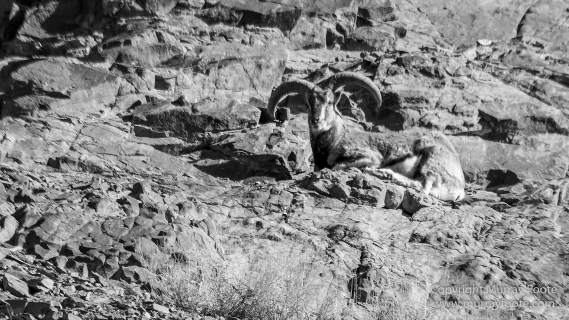 Crossing the ice in the frozen river. 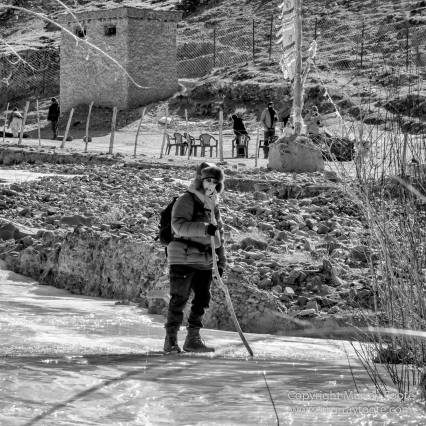 Crossing the icy stream in front of the new camp.

Walking through Rumbak Village on the way to the High Plateau. 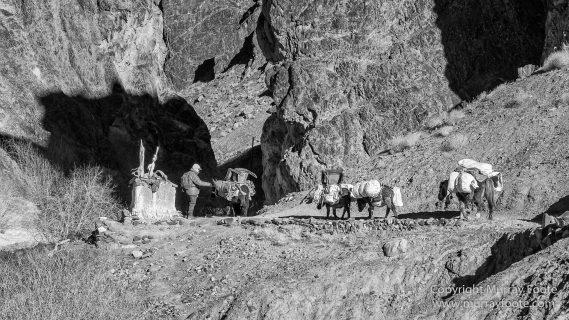 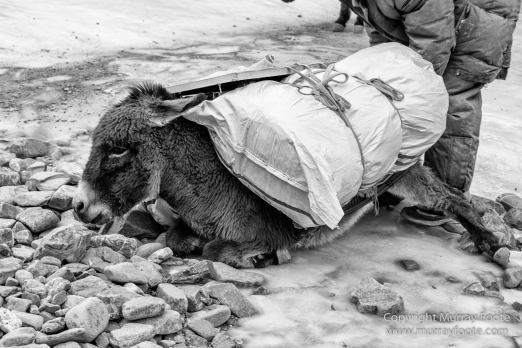 Slipped on the ice.

Back to the bridge.

On this day we went back and revisited the village of Rumbak. 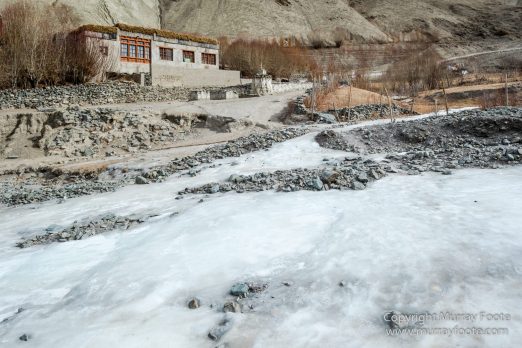 This is the route across the frozen river to the first house.  There are two considerations here.  First, the ice needs to be thick enough to walk on and second, it can be slippery and you don’t want to fall over.  You can see footprints on the ice towards the right.  In general you find a flat place to cross, watch the colour and consistency of the ice and if necessary, you can throw some handfuls of dirt on it.  Disconcerting at first but almost normal after a while.

I wanted to get some more pictures of the fascinating inscribed stones. 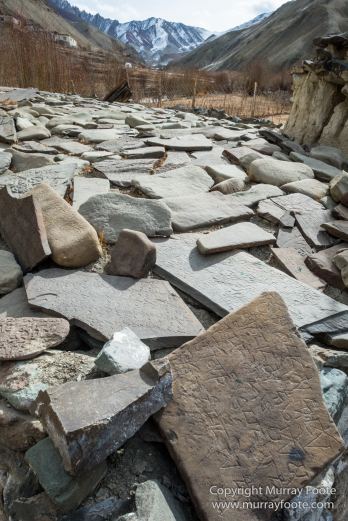 And in some places there can be a lot of them.

Inscribed stones and a stupa (or chorten).

A row of stupas (inside the village).

A stupa was originally used to house the remains of the Bhudda. Later this became sacred texts and images, or the stupas were simply sacred in their own right as a supporting object for meditation.  Stupa is the Sanscript word, Chorta the Tibetan and Dagoba the Sinhalese.  In China, Japan and Korea, the stupa developed into the pagoda. 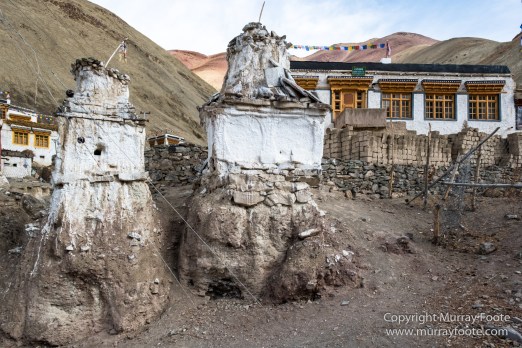 One of the residences that also doubles as a homestay. 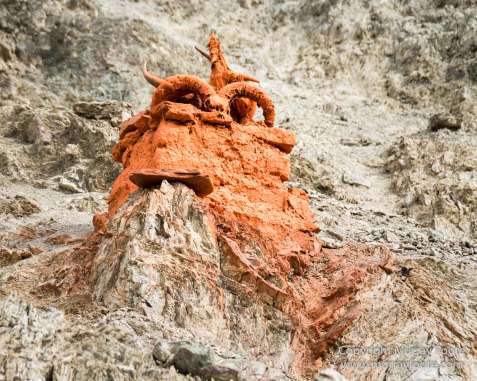 There were maybe four of these, mini-stupas surmounted by blue sheep skulls and other “sacred” objects, and coated by what may be an iron oxide pigment.  I didn’t ask about the significance of these but I wonder whether they are to keep malign spirits out of the village and represent the pre-Buddhist Bon religion, whether rolled up as part of local Bhuddhism or separate.

This is I think a common redstart on the engraved stones.  It is actually out of focus, as with all the bird images in this post, but hopefully I can get away with it at this size.

The shed and some of the houses in the background have animal feed on top, to prevent them being prematurely devoured. 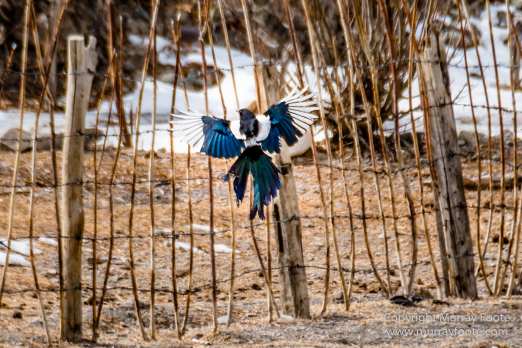 This is the Eurasian magpie, bactriana subspecies, unrelated to the Australian Magpie.

I had wanted to get some photographs of them but they do not hang around when a camera is pointed at them so I sat down on a vantage point near the village and waited. 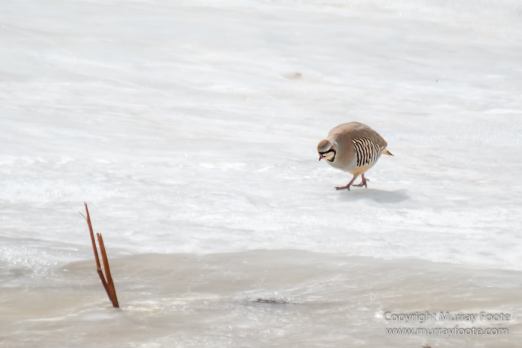 This is a Tibetan snowcock, which I had previously seen but also been unable to photograph. 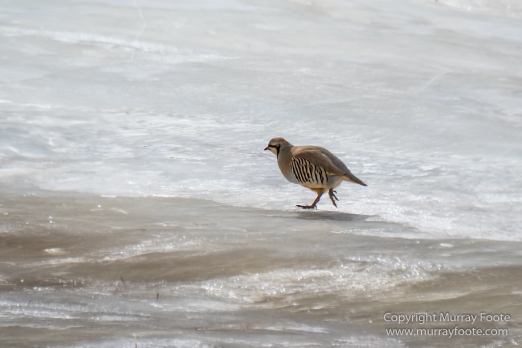 They are quite different in colouring to the Himalayan snowcock I mentioned in an earlier post.  They are in the pheasant family and though they can fly, they seem disinclined to do so in most circumstances. 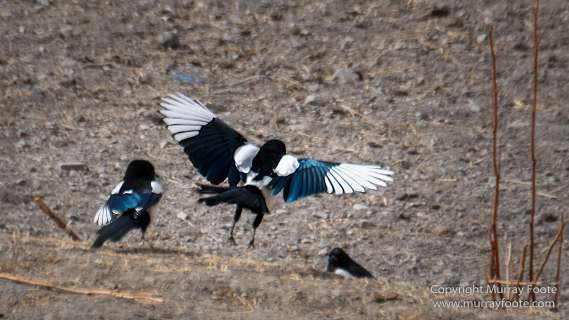 There was something interesting the magpies in this small gulley.

Are you still here? 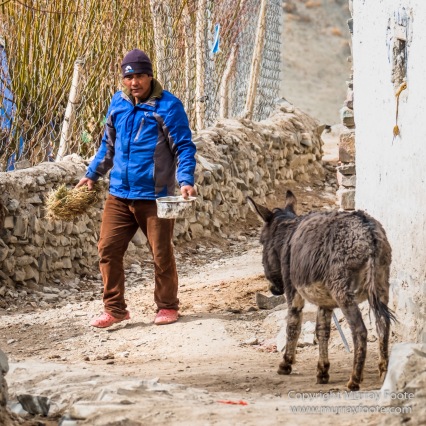 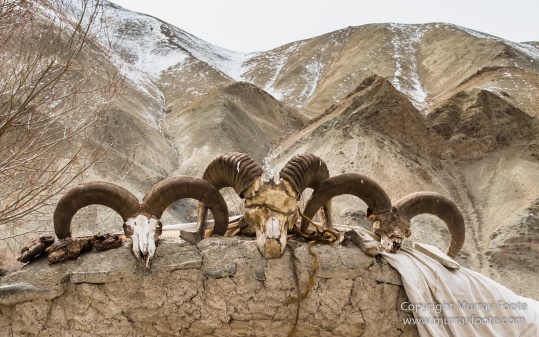 Blue sheep skulls on top of a shed. 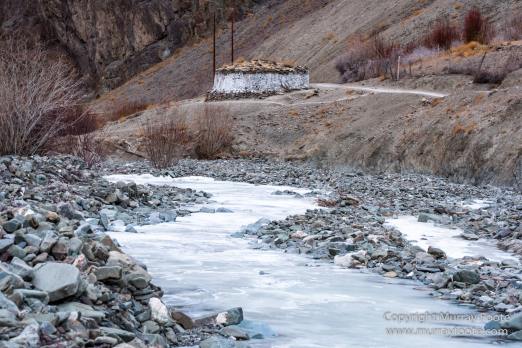 Down below the camp, at the main river.  The platform is covered by inscribed stones and I presume it qualifies as a stupa.

A frozen mini-waterfall in the village near the camp.

And the wider view.

Far up on a mountainside we spotted some blue sheep, also known as bharal.  Not to be confused with the red sheep of Voltaire’s Candide.  This is the female.

And this is the male. 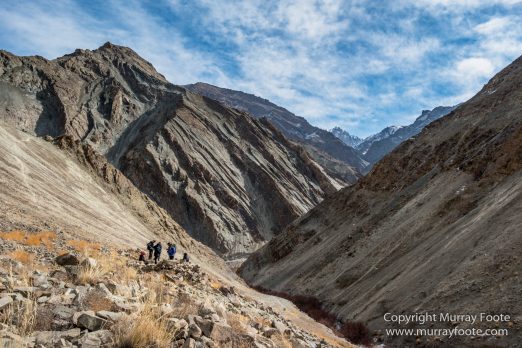 We are 3,500 to 4,000 metres high.  Walking uphill is very slow in these conditions.  If you try to go at all quickly you soon have to stop and recover.  It is better to walk very slowly and keep going. 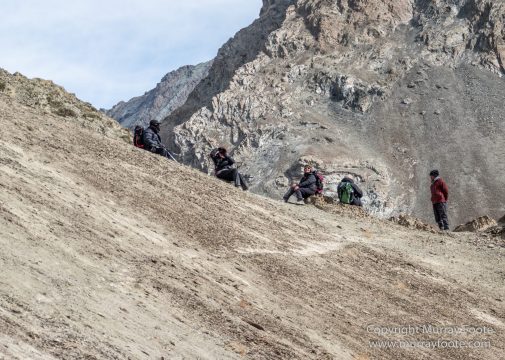 Back at the resting point, there was the remains of an old structure, too small for a house.  I decided it looked easier to get down to the valley by going on further rather than going back the way we came.  I didn’t find anything of particular interest further on in that valley though.

Crossing the ice in the frozen river of the main valley is a delicate task, especially the first couple of times. 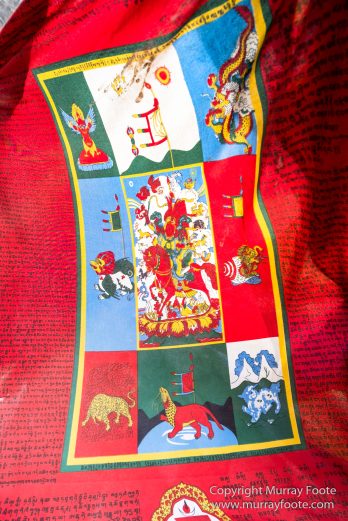 Remarkable details of a flag on a stupa.

More blue sheep, from a valley on the other side of the main valley.  Their coats look a bit more blue here so you can see how they get their name.

I had a few equipment problems.  In particular, my long zoom lens fell three feet to the ground off my monopod at one point.  It seemed to be working but images from the longer end of the zoom range are not sharp (including the shots of the blue sheep in this post).  It is now in for repair.

I also had problems with both cameras (Fuji X-T2s) due to the cold weather.  One showed some strange looking images in the viewfinder (eg monochrome plus blue) but this did not affect the RAW files so the camera was still usable and it returned to normal when I reset it when I got home.  The other one got stuck on particular shutter speeds from 1/320 to 1/800 sec which was a bit more inconvenient.  Fuji fixed that under warranty when I got home.

I was not the only one with equipment problems in the extreme conditions.  One photographer’s Nikon D850 stopped working entirely. 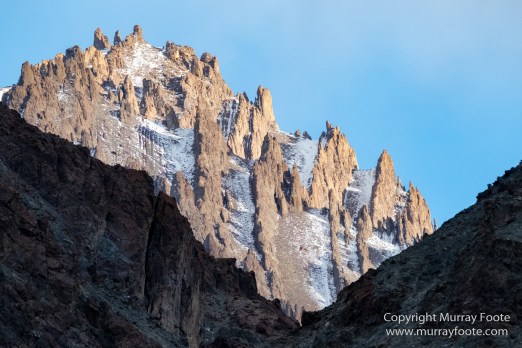