This is a mixed infrared and normal post.  The images have labels and some further information, mainly from information boards, while a stream of information about Tikal follows underneath.  This latter stream may relate to quite different periods than the images and comments on the images. 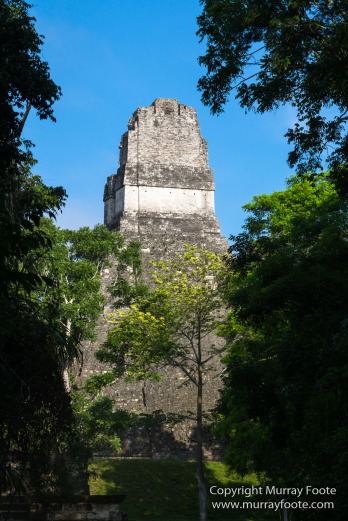 Probably Templo 1 from the rear.

Tikal is one of the main Mayan cities from the Classic Era.  It is about 64 kilometres north of Flores. 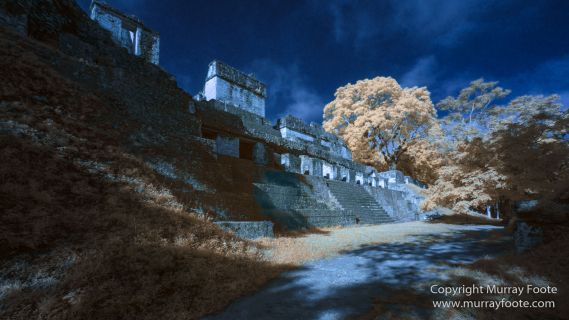 A “palace”, generally presumed to be a royal living and administration area, but without much firm evidence.

About 100 kilometres NNW of Tikal is El Mirador, an even more ancient site with what according to some calculations is the largest pyramid in the world.  Normally you have to walk in through the jungle, a day each way though I suspect little of the city has been reclaimed from the jungle.  I was intending to fly in by helicopter but it did not eventuate. 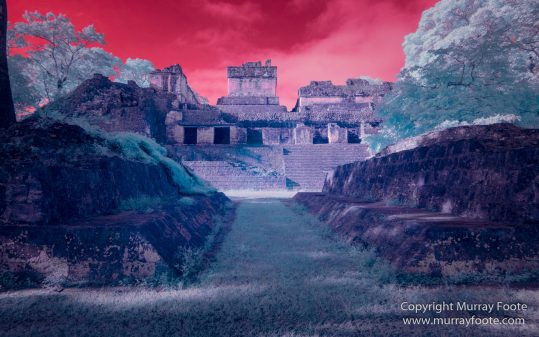 A ball court in front of the palace.

There are traces of agriculture at Tikal from 1000 BC.

“Also known as Temple of Masks, Was built around the year 700 AD, by the ruler Jasaw Chan K’awiil l, as a mortuary monument for his wife, Kalajuun Une ‘Mo’.”

Tikal was built on a series of limestone ridges, with swampland between and with interconnecting causeways.  The causeways made pedestrian ways during time of heavy rainfall and doubled as dams.  The buildings used limestone quarried on site and the holes this created were lined and used as ten great reservoirs for times of drought.

The Great Plaza (into the sun).  Templo 1 and the North Acropolis at the left.

A burial was found under Templo 1.  It may be that there are others under all the pyramids. 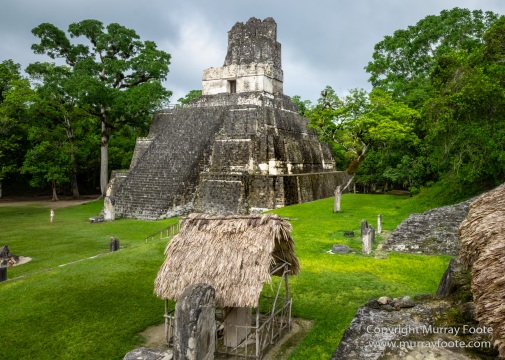 The “founder” of the dynasty at Tikal was Yax Moch Yox (“First Scaffold Shark”), sometime in the first century AD, though there were other rulers before him.

The earliest date found on a stela at Tikal is 292 AD.

A wall area containing traces of a relief.

The first well-documented king is Great Jaguar Paw, who reigned from 317 to 378 AD.  Large scale building occurred during his reign.

Templo 1 on the left, Templo 2 on the right and North Acropolis in the distance, taken from the Central Acropolis.  This is the main ceremonial area but there would have been few trees 1600 years ago.

In 378 AD, Great Jaguar Paw was overthrown and killed by Smoking Frog who was a foreigner, coming from Teotihuacan, the giant city-state near Mexico City today.  The invaders from Teotihuacan brought new military technology and organisation and also conquered some of the neighbouring cities. 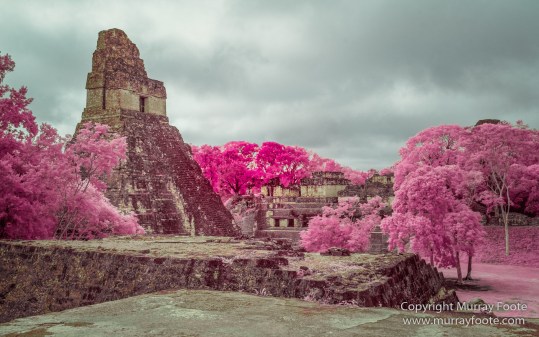 “Temple 1 (also known as the Temple of Ah Cacao or Temple of the Great Jaguar) is a funerary pyramid dedicated to Jasaw Chan K’awil, who was entombed in the structure in AD 734, the pyramid was completed around 740–750. The temple rises 47 metres (154 ft) high. The massive roofcomb that topped the temple was originally decorated with a giant sculpture of the enthroned king, although little of this decoration survives.”

Curl Nose became ruler to Tikal in 379 AD and reigned for 47 years, yet he was also referred to as the vassal of Smoking Frog while he was still alive.

The top of Templo IV, the highest at 74 metres or 150 feet, and probably a yellow-naped parrot.

Curl Nose’s son Stormy Sky was Lord of Tikal from 411 to 456 AD.  He was half Mayan.  The invaders were becoming Mayans but Tikal had adopted elements of the Teotihuacan culture.

Templo 3.  They didn’t have windows of course, that’s just to keep people out of the chamber.

“Also known as Temple of the Jaguar Priest, because of the threshold figure inside the temple, this temple relates to the last phase of construction at Tikal. Its construction is estimated circa 810 and by reference that exists in a fragment of Stela is associated with the ruling Nuun bak Chaak II, who is considered the thirty-first ruler of, the dynastic sequence and is represented on the Lintel 2 of this temple.”

Tikal’s influence expanded greatly in Stormy Sky’s reign.  It directly controlled an area about 25 kilometres around and had a sphere of influence reaching 100 kilometres or more.

People ascending the Central Acropolis.  Templo IV above the jungle at the horizon.

Stormy Sky was buried in the North Acropolis, in this image at middle left in the distance and obscured by foliage.

Similar view, showing a bit more of the Central Acropolis.

A female became ruler of Tikal in 511 at the age of six, co ruler with Curl Head and then Bird Claw.  She is known as “The Lady of Tikal” because the stela that mentions her is incomplete and does not show her name.

The next ruler, Double Bird, may have been her son.  He ruled from 537 to 562 and came to an unfortunate end, along with much of Tikal.  This was also a period of the decline of Teotihuacan, Tikal’s faraway ally.

A giant mask on a wall.

Calakmul is another Mayan city, 30 kilometres north of the Mexican border, so vaguely 130 kilometres north of Tikal.  It was bigger than Tikal and had many more stelae but we know little about it because the stelae have weathered away due to the inferior quality of the limestone used there.

A stela depicting a ruler.  You may need to click on it to make it out at a larger size.

Calakmul had been an ally of Tikal but early in the reign of Double Bird, Tikal launched an “Axe War” against Calakmul and captured and sacrificed a prominent noble, probably after ball court rituals.  Reigning lords were expected to capture and sacrifice the head of another state early in their reign to prove their power but this was to prove a particularly unfortunate choice.

Maybe a ball court marker.  Glyphs around the outside but hard to make out detail.

In 562, Calakmul overran and devastated Tikal and no doubt took Double Bird away for ritual sacrifice.  Tikal was then eclipsed for over a century while Calkmul prospered.

“A palatial complex that has several rooms with benches in its interior, distributed in two galleries on the first floor and on gallery on the second floor.  On the rear wall of the rooms are windows that provide views to the West.”

Slowly, Tikal regenerated itself and was becoming more prosperous under Shield Skull from 650 to 679, although he had to flee from a Calakmul raid to Palenque in 657 and after returning to Tikal, was eventually taken and sacrificed by them in 679. 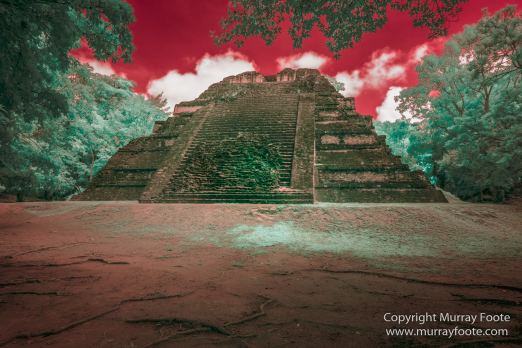 Gran Pirámide, Plaza of the Lost World, one of the oldest remaining parts of Tikal.

“Known as the main structure of the Lost World.  It stands 32 metres (105 ft) high.  This four-sided structure has staircases on all sides.  During the Preclassic period, around 300BC, this pyramid and its squared platform formed an astronomical observation unit.”

Shield Skull’s son Hasaw Chan Ka’wil brought about the re-emergence of Tikal as a great power.  He came to the throne in 682, raised many stelae and altars, and embarked on a program of reconstruction in the Great Plaza and the North Acropolis.

Temple of the skulls, Plaza of the Lost Worlds.

“The Temple of the Skulls (Templo de las Calaveras in Spanish) is the third largest temple in the Mundo Perdido (Lost World) complex. A new version of this temple was superimposed upon a preceding version during the 7th century AD. This new version faced away from the Mundo Perdido and possessed a single room with five doorways that faced onto the adjacent Plaza of the Seven Temples to the east. Around AD 700, this version was sealed and a new version was built on top, at which time it became one of the highest structures in the Mundo Perdido. This version of the structure had a four-level platform with an access stairway interrupted by a vaulted niche, as was the architectural style prevalent at Tikal during this time. The base of the niche was adorned with three sculpted skulls, one facing forwards and the two flanking skulls in profile.”

Hasaw Chan Ka’wil was convinced that he was destined for greatness because his reign commenced 256 years after that of Stormy Sky, the most powerful year of Tikal.  This was significant in the Mayan long count of time, and represented the same point in another cycle.

Plaza of the Seven Temples (and following images).

Empowered by this vision of greatness, he went to war against Calakmul and in 694, he defeated them and captured and sacrificed their Lord, Jaguar Paw.

He ruled from 682 to 734 and won further successes against Calakmul, which was eclipsed politically.  Templo 1 is also his tomb.  His son Yikin Chan Kawil constructed the temple on top of his tomb.

Yikin Chan Kawil also constructed the massive Templo 4.  His successors put up Templos 3 and 6 and much of what we see today is from the end of the era of Tikal.  This is partly due to the practice of building new structures on top of old ones.

Further conflicts between Tikal and Calakmul are recorded until the mid 740s, then both states slowly faded away.

Most of the area of the Lowland Maya, mainly in Guatemala and Belize, was abandoned by around 900.  The most plausible theory is overpopulation coupled with severe years of prolonged drought.

A remnant population may have persisted at Tikal up to around 1000, but it was then abandoned to the jungle for the next 1,000 years.

Plaza of the Seven Temples.

“This is an important part of socio-political activity of the Tikal inhabitants of the Late Classic. At the northern end of the complex there are three ballgame courts, which in turn frame the north end of a large rectangular plaza. On the east side, there are seven temples aligned from north to south, the central temple presenting larger dimensions and the roof comb still preserved.”

Around 3,000 separate structures have been recorded in the 16 square kilometres that form the heart of the city.  About 10,000 people lived there.  There was also a much wider area that was part of the city which overall supported around 50,000 to 60,000 inhabitants.  At the height of Tikal’s power, around 500,000 people lived in its area of influence.

Plaza of the Seven Temples.

While superficially, the swamps around the city might seem unsuitable for agriculture, they had a complex system of canals and sophisticated practices to make this possible.

“One of Tikal’s highest temples, reaching a height of 57 meters, dated to the early part of the Late Classic period. The structure consists of a pyramidal base with seven stepped bodies, with rounded corners. On the façade it has a wide staircase with balustrade. During the investigations it was possible to establish that it has no substructure, which means it was built from the beginning to the top of the crest in a single chronological moment around 650 AD making it one of the earliest in Tikal.”

There is a great expanse of jungle in the former Mayan lands of Northern Guatemala, Southern Mexico and Western Belize.  There are many unexcavated Mayan cities and no doubt many as yet undiscovered.  These are potentially threatened by plunder of ancient sites and exploitation of the rainforest region.  They are all under some kind of heritage protection but governance is weak and funding scarce.