In Jodhpur, on our last day in India (excluding travelling back to Australia via Delhi), we visited Mehrangarh Fort.
.

Jodhpur and its fort was founded by Rao Jodha 1459, and soon became capital of the Rajput kingdom of Marwar.
. 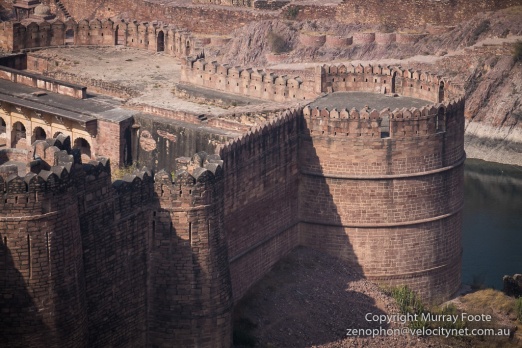 Jodhpur was conquered by Sher Shah Sur in 1544 or 1545. As we saw in an earlier post, he defeated the second Mogul Emperor Humayan, who fled to Persia. He established a remarkably competent administration that became a model for later Mogul Emperors. Then he sought to subdue the states of Rajasthan but died while beseiging Kalinjar when a rocket bounced off a wall of the fort and ignited a pile of them near where he was standing.
. 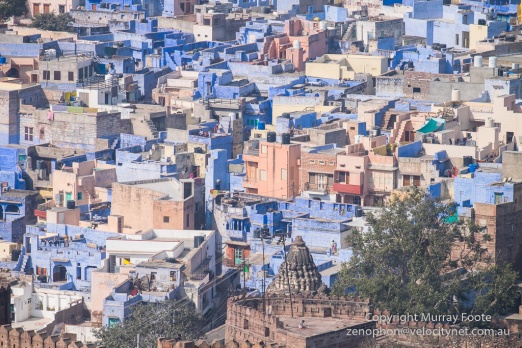 This is the old city of Jodhpur, the Blue City.  According to one legend, the Brahamans originally painted their houses blue as a sign of their disctinctiveness but the rest of the population then followed suit.  It is essentially a pedestrian zone, too crowded for streets.  We asked our bus driver to take us there but he declined, claiming it was not safe. 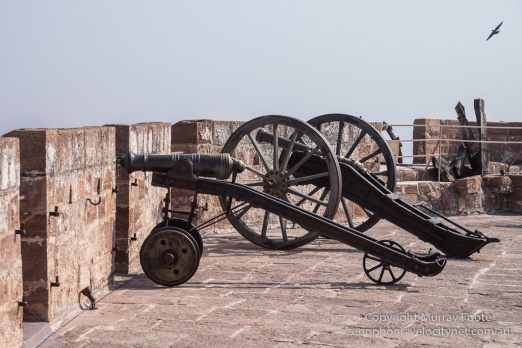 Though the origins of the fort are much older, much of it dates from the time of Jaswant Singh (1638-1678). 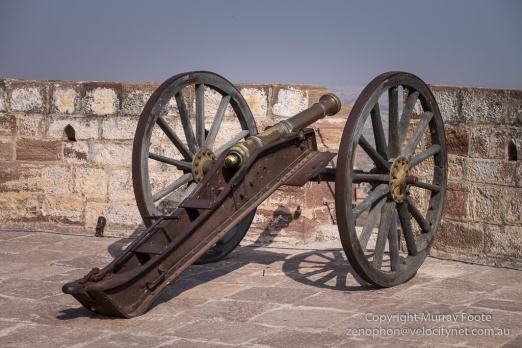 In 1678, Jaswant Singh, the Maharajah of Marwar (capital Jodhpur) died without an heir. Aurangzeb interfered to name a compliant candidate as Maharajah but meanwhile one of the old Mahajarah’s wives had given birth to a boy. This infant, Ajit Singh, was smuggled out away from Aurangzeb and took refuge in Mewar. The Maharana there successfully resisted the Moguls even though they sacked Udaipur, and Ajit Singh remained free. After Aurangzeb died in 1709, Ajit Singh, now over 30, successfully reclaimed Jodhpur and Marwar. 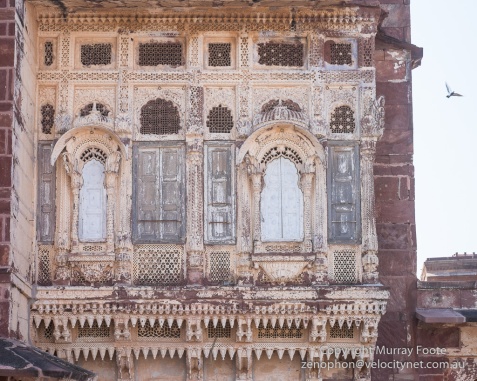 The fort museum has a particularly impressive collection and includes several palaces.  Here is a Maharaja’s howdah, for travel atop an elephant.  It was presented to Maharaja Jaswant Singh by Mogul Emperor Shah Jahan in 1657.

Lions embossed on the side of a howdah.

Another howdah, this time from the late nineteenth century, complete with parasol.

A lion on the side of a howdah. 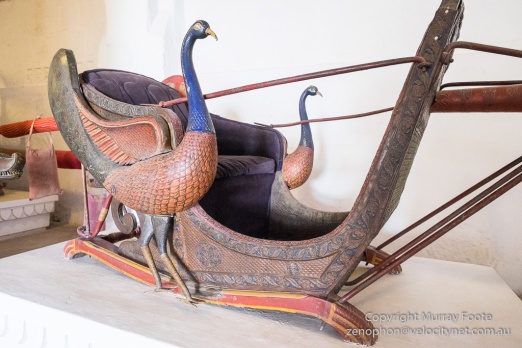 A palanquin from the nineteenth century, showing Western stylistic influence, and featuring carved wooden peacocks with glass eyes.  (In case you don’t know, palanquins are carried by human bearers).

The maharaja’s throne.  It doesn’t look too comfortable but there would have been plenty of cushions on it.

From the mid-eighteenth century, this is a grand palanquin captured as war booty by Maharaja Abhay Singh after defeating Governor Sarbuland Khan of Gujurat.  Perhaps it was cooler where it had been used in Gujarat.  The Maharaja used it once and found it remembled an oven, making him rather like an infant trapped in a closed car in summer.  It was never used again. 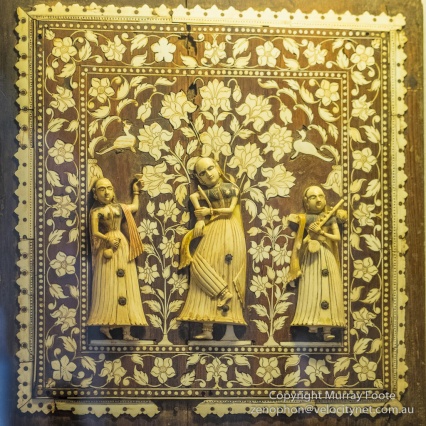 Lid of a cosmetic box, quite small, ivory inlay from the nineteenth century.

A Houqa bowl.  This is made of zinc copper and lead, chased or carved and inlayed in silver.  The black background is the result of oxidation. 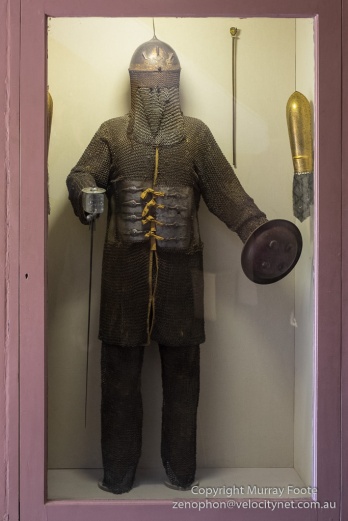 Spiral staircase heading up to the next level.