We abandoned our attempt to photograph at dawn today because the weather closed in. Lots of zorros (Patagonian foxes) visible through the window at breakfast.

We had intended to walk to a closer view of the Torres del Paine but worked out it would take too long and we couldn’t be there at dawn anyway so we went for a drive instead. We visited a waterfall (Cascada Paine), Laguna Azul (not to be confused with Lago Azul we went to near Helsingfors in Argentina) and Laguna Amerga. We saw many guanacos on the way to Laguna Azul, a flamingo there and some magnificent views of the Paine massif from both Laguna Azul and Laguna Amerga. 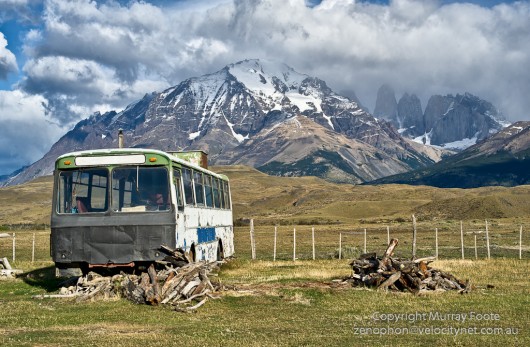 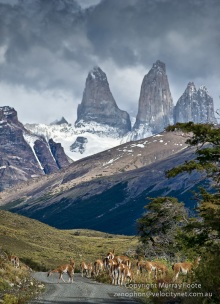 This is about 10km from the hotel. A couple of buildings, a few people wandering around, probably some kind of farming activity going on. There either had been or still was accommodation, restaurant and camping here … and there is the old bus in front of the mountains. I think it was used for storage.

We encountered probably more than a hundred guanacos and you can see some of them on the road to the right. They used to be common right through Patagonia but they were largely eliminated by early ranchers lest they compete with their sheep and cattle. In the case of Tierra del Fuego, this was as recently as the first part of the twentieth century. 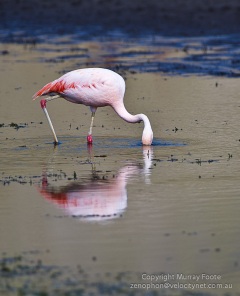 At Laguna Azul, I found a flamingo that I slowly followed up and down the edge of the lake and photographed with a long telephoto lens.

We returned along a different road.

The Paine massif from the road just before Laguna Amerga. It was raining a bit and the weather looked as though it was closing in. Not long after, though, the rain cleared.

Laguna Amerga is a small lake no more than two metres deep with no rivers flowing into it, shut off by ridges and glacial moraines and a very picturesque location.

This is now much later. We have had dinner and returned along the road a little way for a photograph of the sunset. However, there was no sunset to be had. This in any case is after dark. 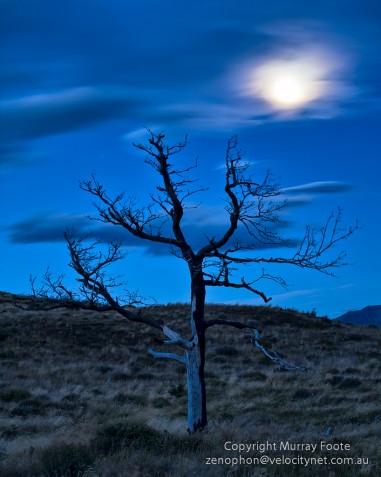 It was three days before the full moon, just close enough for a spot of moonlight photography. This is by moonlight with the moon, about 40 minutes after sunset. 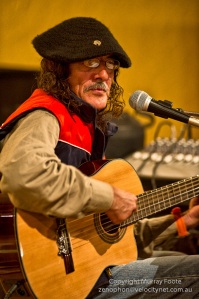 After that, we went back to the hotel and we could hear live music as we prepared for the next day inside our room.

There was a duo playing acoustic latin american music in the common area not far away. I went out to look and they sounded good but I couldn’t stay long because we had to be up early for a long journey.