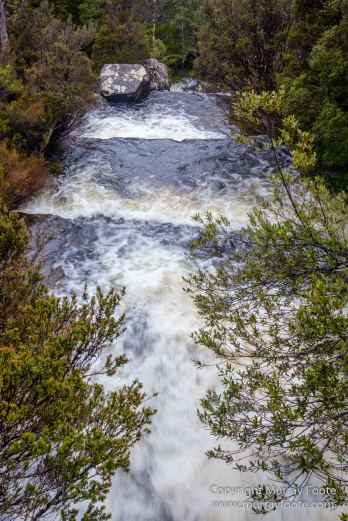 This is a day of walking through the rainforest.  Here we have a small river cascading down towards the Mersey River, which runs parallel to the track though not very close.  Taken from a bridge over the river on the track.

It’s misty here, perhaps some rain, but overall the day was fine.  In the late afternoon we could see menacing clouds ahead but it didn’t affect us that day. 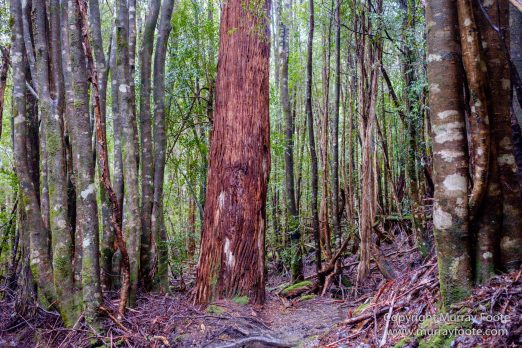 Built in 1910 by Patrick “Paddy” Hartnett as a basis for possum trapping operations.  It was built using King Billy pine and the large wooden structure at the near end is the chimney.    These days it is only available for day visits or as an emergency shelter. 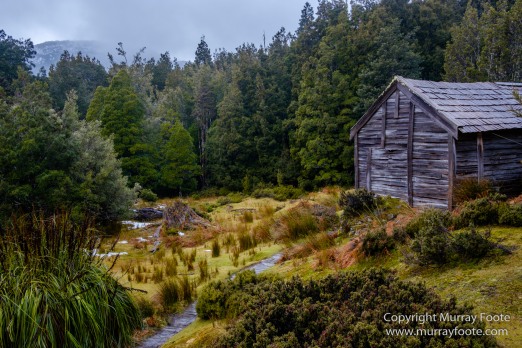 Paddy’s wife planted native plants around the hut and presumably had a vegetable garden.

In each of the Tasmanian Walking Company huts (not the public huts and not the Du Cane hut) there is an identical array of books.  So if you start reading a book in one hut, you can keep reading it in the next.  I started reading The Black War by Nicholas Clements, the story of Tasmanian Aboriginal encounters with Europeans, and especially the war at the end of the 1820s.  I didn’t finish it on the track so I bought a copy and I highly recommend you do too.  It treats the accounts of the Aborigines and the settlers separately and shows the accounts of each in different chapters. 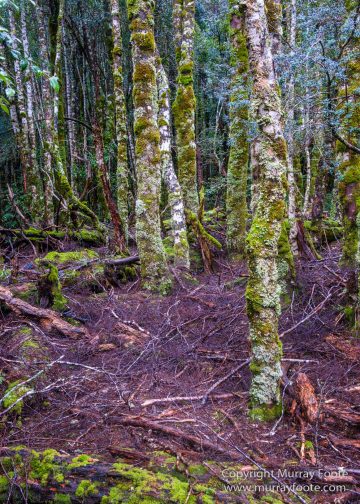 The first white settlement in Tasmania was in 1803.  Clements says there were only 2,000 Aborigines there at that time.  They lived in several tribes, spoke different languages and periodically fought with other tribes.  The main unit was the family group but they occasionally had meetings with larger groups including other tribes for purposes including match-making.

Initially British settlement was convicts but before long there was a settlement in Hobart, then Launceston and gradually spreading out into the countryside.  There could be free settlers who might have convicts working for them, there were freed convicts and escaped convicts and for a while, bushrangers (outlaws).  Initially there was not much agriculture and the Europeans competed with the Aborigines in hunting game such as Bennett’s wallabies and grey kangaroos.  Gradually they claimed land for farms and occupied Aboriginal hunting grounds and water supplies.  It wasn’t so much that there was a systematic policy to exterminate the Aborigines but Tasmania is a small island and ultimately there was nowhere for them to go.

Colonial authorities were often solicitous of Aboriginal welfare at least in theory, though settlement undermined Aboriginal society, violence on the frontier was outside the control of the authorities and no white person was ever arrested for killing an Aborigine in Tasmania.  There could be unprovoked murderous violence against Aborigines, and women and children could be kidnapped (though they usually escaped).  Aborigines could also kill whites and retribution for that could be disproportionate and misplaced. 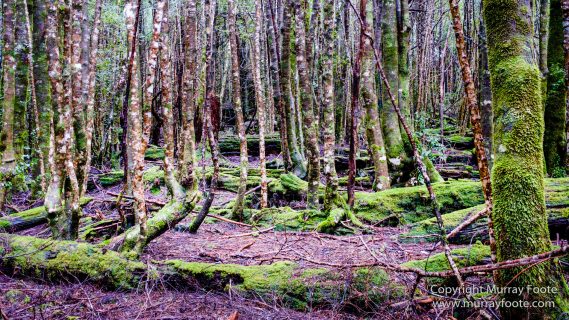 For the first twenty years, the Europeans that Aboriginals killed were often specific people who had wronged them.  Then the central and eastern tribes gradually realised that their whole way of life was becoming untenable and each effectively declared war on all whites.  In 1824 there were maybe 1,000 Aborigines and declining as compared to say 14,000 Europeans and rapidly rising.  From 1824 to 1831 around 281 colonists and 600 Aborigines died violently.  For the Aborigines this was a huge proportion of their population.  The fighting was much more intense than in other parts of Australia and the Aborigines provided very effective resistance.   They went down fighting, even well past the point when they could see that they could no longer win.

The Aborigines only attacked in daylight using spears and clubs.  This was not because they were unable to obtain or use muskets but muskets were single shot and slow to reload and they found spears more effective.  The settlers couldn’t find them in daylight so they tracked them down by their fires at night.  Traditionally, the Aborigines kept warm at night by covering their skins with a mixture of animal fat and ochre and huddling around the fire.  As conflict intensified, the animal fat and ochre was harder to find and the fires had to be kept small and discrete.  They might have blankets but these were of no use when they were wet.

In 1831 there was an almost comical display of incompetence by the colonial authorities.  They attempted to throw a cordon around an area of the south east, tighten it and trap all the Aborigines left inside.  They did stumble on a camp early on and kill two and capture two but other than that the Aborigines had no trouble slipping through the cordon.  The Black Line used all available troops, as many volunteers as they could muster and large amounts of resources.  But the authorities had no idea how rugged the country was, they were unable to supply most parties most of the time and it was a fiasco from the start.

Numbers killed reached a peak in 1830, even as Aboriginal numbers continued to decline catastrophically.  In 1830 and 1831, George Augustus Robinson went around the tribes and persuaded them to surrender.  They would be taken to Flinders Island and were promised they wold be able to go back to their lands when the war was over.  There were just 200 of them left and the promise that they could return to their lands was always a lie.

Probably the most extreme depredations on the Aborigines were in the north west, at the hands of the Van Diemen’s Land Company.  The Company arrived there in 1826 so violence occurred much later, lasting from 1827 to 1842.  Little is documented but the person who was effectively chief law officer was a psychotic killer and by the end of 1842 there were no Aborigines left.

On the north and east coasts, sealers had had contact with coastal Aborigines from as early as 1798.  At first they traded with them, including bartering for sexual favours. After a while they turned to abducting Aboriginal women, taking them to Bass Strait islands where the tribe could not follow and often holding them as though slaves.  In November 1830, there were only 74 Aborigines left on Flinders Island of whom only three were women.  At the same time, the sealers held 70 Aboriginal women.  Robinson started arranging transfers of women to Flinders Island in late 1830 to early 1831.  Then in perhaps the cruellest twist of all, the sealers successfully petitioned the Governor that they should be able to keep their women.  The remaining Aboriginal men and women were denied a last chance to live together.

For many years it was said that there were no surviving Aborigines in Tasmania but this is not true.  24,000 Tasmanians identified as indigenous in the 2016 census, nearly 5% of the Tasmanian population.  They are all descended from the women kidnapped by the sealers. 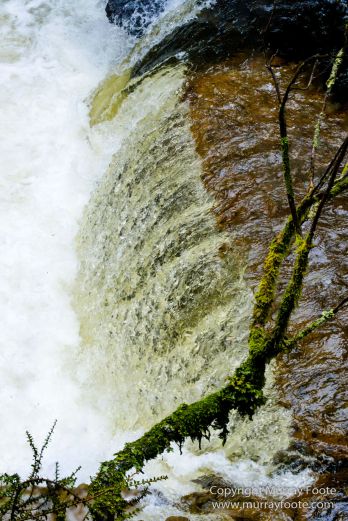 No shortage of water going through.

From Fergusson Falls, we head west towards Du Cane Gap.  If you instead head east along the Mersey River, you go through a valley called The Never Never.  This would lead you to Junction Lake in Walls of Jerusalem National Park.  There are no tracks (until the other side of Junction Lake) and no ferry across the Mersey, so by the sounds of the name this must be a particularly rough and wild place to venture.

Clearly it’s been raining and the alpine yellow gum is glistening resplendently. 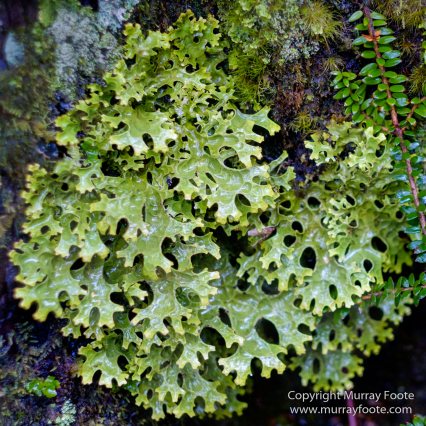