I am back from Ladakh but not yet ready to start posting on the trip.  In the meantime, I will post technical articles I have already published for the Canberra Photographic Society Blog:

Unless you are shooting film and printing in a darkroom, you’re likely to need a computer to deal with and process your images. If you’re looking at purchasing one for photography, there are several things to consider:

So let’s consider each of these in turn, both from the point of view of a cheaper alternative and what’s the best you can have. 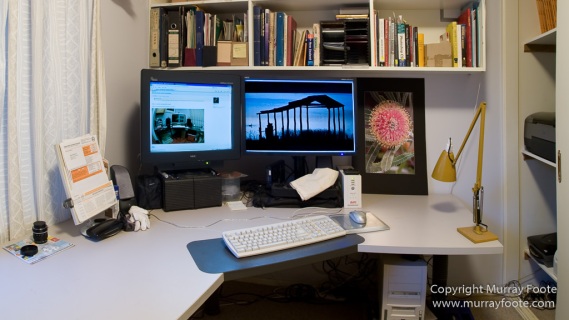 It’s better to have at least a reasonable quality monitor. If your monitor is too cheap or too old, it may not be capable of showing accurate colour. The main monitor types are TN and IPS. It is better to go for an IPS rather than a TN monitor because the appearance of TN monitors changes according to viewing angle and therefore may not show you an accurate picture of your image.

Another choice is “normal” gamut (sRGB) or “wide” gamut (aRGB). Wide gamut monitors are especially valuable for printing bceause you can fairly accurately simulate on screen the colours and densities of a printed image.

Another level of choice is resolution. The ultra high resolution 4K monitors have a resolution of something like 3840×2160 instead of 1900×1200. Photographic quality ones can be very expensive. You will also need an expensive graphics card to drive it. You will get amazing resolution and excellent colour but you may have problems with some software. For example, the Nik software suite may not work well on 4K because Google is not maintaining or updating it. You also need good eyesight or the extra resolution may be wasted.

Use them if you have to, but cheap monitors will not give you accurate colour and tonality. The best monitors are NEC and Eizo. NEC is pretty much as good as Eizo at a much lower price. However, NEC monitors are now unfortunately out of contention because NEC Australia has a new policy that it won’t replace monitors with up to 8 dead pixels (2 bright, 6 dark). So this leaves only Eizo for the highest quality monitors.

Fortunately there is a new player on the field -BenQ. While not as good as the Eizos they are still photographic quality at a much lower price.

Prices from Image Science are as followed, wide gamut unless otherwise indicated (you may be able to get a bit cheaper on the web):

Here is an article from ImageScience on buying monitors.

A good colorimeter is almost essential, especially for printing. Your eyes can adjust to see both daylight and tungsten light as normal so they are not good tools to adjust monitors, so you should use a good colorimeter to calibrate and profile your monitor. The best colorimeter is the X-Rite i1 Display Pro. (Online prices start from just under $300).

If you have an old computer and it works for you then it works for you. You might get more life out of it with more RAM but then new computers are cheaper than they used to be. If you are considering a new one:

For ultimate performance, you may want a custom PC. You could either build this yourself or get someone to build it for you. In Canberra, this might be MSY (don’t expect salesmanship and demonstration from them; you need to know what you want first).

Here are some guides to a custom PC:

And here is a couple of guides if you are in the market for a Mac:

Another thing to consider is storage. It depends partly on how many images you delete and how large the image files are from your camera, but it is common in the digital age to need lots of space for image storage. SSDs may take over in due course because they are faster and probably more reliable but that’s still some way off so for most storage we still rely on spinning disks.

Larger spinning disks are now available. You would want a 7200rpm drive rather than the 5400rpm ones which are more suited to backup and Western Digital Black drives now go up to 6TB. If that is not enough storage you could combine several drives in a RAID array. This can both speed up operations and give some protection against disk failure. Your motherboard and operating system would need to support the size of drive or type of RAID you might want.

One last thing that may be worth considering is a UPS or Universal Power Supply that will protect your PC against power spikes and enable you to save your work in the event of a loss of power.

(I will consider printers in a separate article).

There is a huge variety of laptops available in all sorts of different configurations. For most photographers the main purpose of laptops is for travelling. For some, the sole purpose is storing images in which case RAM and screen resolution are not so important. Others want a machine they can process images on in available time while they travel. RAM and screen resolution then become much more important. In either case, USB 3 inputs will make a big difference in speed of importing images. So will SSD hard drives. It is possible these days to purchase a laptop with a 4K screen, 32GB RAM and a 1TB SSD hard drive though such machines are not yet readily available in Australian retail outlets and will not be cheap.

The alternative to a travel laptop is lots of SD or CF cards but this may not be practical on a longer trip.

This page from Puget Systems shows what might be possible with a very highly specified custom laptop though at 3.4kg this is a desktop replacement unit rather than one for travel. (Click the [Customise] button for specification options).

It is common for people to be sanguine about backup until the first time their computer goes down and they lose lots of files. Ideally you should have two or three backups and one should be stored offsite in case of fire or other disaster. These could be single external drives or you could use a NAS, which combines multiple hard drives in a RAID array and which you may specify for access from a home network.

If you rely on SD cards or CF cards while travelling, you may not have your images backed up and would therefore be at risk of losing them. If using a laptop while travelling, you should also be backing up to external disks. External SSDs are a much lighter option than conventional drives and can readily fit in a pocket. They are still more expensive but becoming more affordable.

To backup files you need backup software which can be Windows (which I admit I haven’t tried for this purpose), a third party product such as Acronis, or possibly software that comes with your hard drive.

It can also happen that your C Drive crashes or gets a virus. To cover for such an event you should make a system rescue disk so you can still boot up your PC from it, and save a system image so you can quickly get back your C Drive in a functional state.

7 comments on “Computers for Photography”